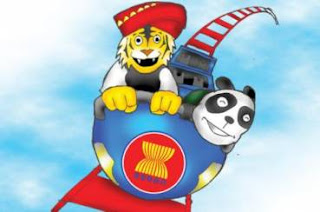 While the world watches the Trans-Pacific Partnership, an equally important pact is in the works
Read more http://kerrycollison.blogspot.com.au/

Although negotiations for the Trans-Pacific Partnership and the Transatlantic Trade and Investment Partnership are grabbing headlines around the world, Asia's own mega-regional trade deal - the Regional Comprehensive Economic Partnership - is quietly being negotiated.

But it deserves more press: the budding trade agreement could create the world's largest trading bloc and have significant implications for the world economy. So what would it cover and who will it benefit? What are the barriers to success?

The regional partnership was first mooted at the November 2011 Asean leaders summit in Bali. While the partnership would expand Asean's role in coordinating regional trade, the key purpose is to reconcile two long-standing proposals into a large region-wide trade agreement: the East Asian Free Trade Agreement, which included Asean, China, Japan and South Korea, and the Comprehensive Economic Partnership, which added Australia, India and New Zealand. The RCEP bridges the two proposals by adopting an open accession scheme. Negotiations among the 16 parties began in early 2013 and are scheduled to conclude by the end of 2015.

The parties say that their goal is to achieve a modern and comprehensive trade agreement, and the agenda covers trade in goods, services, investment, economic and technical cooperation, and dispute settlement. Compatibility with World Trade Organization trade rules on goods and services is also a principle for RCEP negotiations.

Because the RCEP will contain three of the largest economies in the world - China, India and Japan - it is globally important. The bloc represents 49 per cent of the world's population and accounts for 30 per cent of world GDP. It also makes up 29 per cent of world trade and 26 per cent of world FDI inflows. Conservative estimates using various computable general equilibrium models suggest that if the RCEP were implemented it would bring large income gains to the world economy of US$260–644 billion in a decade or so.

The RCEP can help regionalize the sophisticated global production networks that make Asia the world's factory. It will also reduce the overlap among Asian FTAs, lest Asia becomes a confusing ‘noodle bowl' of multiple trade rules. If a comprehensive agreement can be reached, trade barriers in Asia will come down and the new rules will be consistent with WTO agreements. Rules of origin could be rationalized and made more flexible, and be better administered through electronic means. In the area of investment rules, where no WTO agreement exists, the RCEP will promote easier FDI flows and technology transfers by multinational corporations.

The RCEP is less ambitious than the TPP and the prospect of development assistance for adjustment means developing countries will find it easier to join. Additionally, RCEP, along with the TPP, will influence the emerging regional trade architecture towards achieving a free trade area of the Asia Pacific.

It will not be easy to realize these benefits. First, negotiators from large countries may find it difficult to respect the central role of Asean in RCEP. Second, there is a risk that the RCEP can only achieve limited trade and investment liberalisation if parties with different levels of development and interests negotiate exclusions to protect sensitive sectors. Third, the RCEP will need to improve its coverage of new trade issues such as competition policy, environment and labour standards.

These problems are increasingly being addressed by the most comprehensive trade agreements in Asia and internationally. Fourth, there is a risk that firms, particularly small and medium enterprises, may under-use the RCEP due to a limited understanding of its legal provisions. Fifth, many countries will find it difficult to pay for physical infrastructure and improve trade facilitation so goods and services can be transported smoothly across RCEP member countries. Sixth, it is possible that the RCEP and other mega-regional FTAs may exacerbate the divergence between regional and WTO trade rules. The WTO could become less relevant to global trade governance.

RCEP negotiations should focus on a template with the best features of existing Asian FTAs (including existing Asean+1 FTAs), set a clear timetable for concluding negotiations, and actively involve the private sector in the negotiations. Afterwards, significant outreach and business services are needed for small and medium enterprises to lower the costs of using the RCEP. Expanding the Asian Bond Market Initiative and supporting public–private partnerships are also useful to increase regional infrastructure financing.

Above all, the RCEP and other large regional FTAs will show that the WTO needs a broader agenda. It has to acknowledge new opportunities like global supply chains and the regional liberalisation of trade.

(Ganeshan Wignaraja is Director of Research at the Asian Development Bank Institute, Tokyo.)