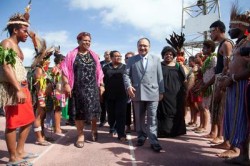 A recent decision by Papua New Guinea’s (PNG) government to strengthen the nation’s criminal code has re-awakened the debate over the role of deterrence in reducing crime.

Much of the commentary surrounding the proposed changes has focused on the reinstatement of the death penalty. But PNG’s parliament is also considering a range of harsher measures including life imprisonment for rape, 50 years for drug cultivation, 30 years for armed robbery, 20 years for illegal brewing, and the criminalisation of sorcery.

The rationale behind imposing harsher sanctions for convicted offenders is relatively straightforward and appears to be popular among the citizens of PNG. The theory is that PNG’s young men, who are responsible for much of the high crime rate, will assess the harsher penalties and conclude that their actions are not worth the risk.

But some groups are less enthusiastic about tougher measures for criminals. Their reservations primarily relate to concerns about ‘human rights’ violations in the case of the death penalty. Many also assume that ‘root causes’ such as inequality and a lack of job opportunities force the nation’s surplus of unemployed young men to commit crime. They suggest that rehabilitation and jobs are a much better way to attack PNG’s crime rate.

Before unpacking the shortfalls of this approach, two broad observations about PNG’s current criminal justice system should be made. First, criminals are very unlikely to be ‘caught in the act’ in PNG. The size of the Royal Papua New Guinea Constabulary (RPNGC), measured as a ratio of 5000 police officers to 7 million citizens, is roughly 1:1400. In some parts of the country the ratio is as wide as 1:2700. The average citizen, let alone a criminal who is seeking to avoid police contact, is therefore unlikely to come across an RPNGC officer.

Secondly, PNG does not appear to put many offenders in prison. Despite its reputation for violent crime, its incarceration rate is a very low 58 per 100,000 people (ranked 187 in the world). As evidence from other parts of the world suggests, the average criminal is likely to commit multiple crimes rather than just one. Incapacitation often has a tremendously high but under-acknowledged impact on reducing crime. Yet PNG’s low imprisonment rate prevents this benefit from being fully realised.

It is therefore difficult to conclude that state-led deterrence has been properly applied in recent years. This may undermine the case for pursuing a tougher criminal code, particularly given that criminal punishment in PNG can take place in ‘non-state’ forms, such as retribution from rivals or through community justice mechanisms. But the ‘non-state’ approach to justice, especially through community mechanisms, has its own problems. The emphasis on mediation over punishment, which has long been a foundation of cultural justice in PNG, is difficult to sustain in the face of poor results and a changing cultural landscape.

Establishing large-scale job programs to dissuade young men from crime also has its own challenges. Calls for this approach are not unique to PNG. For example, similar hopes of providing jobs to crime-prone youth were a main motivation behind the ‘Great Society’ programs in the United States in the 1960s. But some studies indicate that these programs had a limited impact on crime reduction, despite high-resourcing and political investment.

Other research has found that the link between unemployment and crime is tenuous. To again draw from the United States, even during the Great Depression, when unemployment reached 25 per cent, crime did not skyrocket as many would presume but stayed relatively flat, consistently with other times of high unemployment in US history. As one theory asserts, jobless parents may have helped to deter adolescent delinquency through an unusual period of domestic supervision. This would also apply to PNG, where a re-emphasis on family bonds and ties may serve as a particularly strong ‘domestic’ or household deterrent to crime.

In response to the recent violence that has taken place in PNG, simply saying ‘there is no empirical evidence’ for deterrence may be too premature, especially of what may be the ultimate deterrent: the death penalty.

But tightening criminal legislation in PNG may be futile without corresponding moves to implement a comprehensive state criminal justice apparatus. The relationship between a nation’s criminal code and its underlying society can produce some surprising results. To use gun ownership as an examplec, some countries can have high rates of legal gun ownership but very low murder rates, as witnessed in Israel, New Zealand and Finland. By contrast, some countries — Russia, Brazil and Mexico for example — employ strict gun control laws but endure stubbornly high murder rates.

Ultimately, youth job creation and tougher penalties for criminals in PNG need not be opposing options. Both strategies are worth pursuing. In the coming years, combining a swifter and more deliberate criminal justice system with a commitment to strengthening families, a better-quality police force and opportunities from an expanding market economy, could create scope for crime reduction in PNG. East Asia Forum.

Sean Jacobs is a former Australian youth volunteer in the Pacific and has worked with all levels of government in PNG.