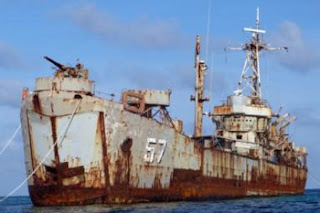 The Philippines' first line of defense in the Spratlys

On May 31, delegates primarily from the Asia-Pacific states will gather again in Singapore for the Shangri-La Dialogue. The three-day security forum, held annually by the International Institute for Strategic Studies (IISS) since 2002, addresses a wide array of regional and non-regional security issues. It should then surprise no one that on the agenda will be a discussion on avoiding conflict at sea.

Having pursued diplomatic and political alternatives to no avail, the Philippines has ultimately taken its case against China to the International Tribunal for the Law of the Sea (ITLOS), seeking arbitration to settle the South China Sea disputes. In response, China has refused to participate in or even acknowledge the legal proceedings, surrendering its chance to appoint one of the five arbitrators who will hear the case.

Despite China's absence, however, a legal victory for the Philippines is far from certain; and as this case will likely highlight, to be observed by other claimant states with similar stakes in the South China Sea, international law is far from perfect.

International law shortcomings
To resolve the disputes via international law will require overcoming seemingly insurmountable obstacles. The first hurdle facing the Philippines is ITLOS' authority to settle those matters brought before it.

The next hurdle then becomes enforcing the tribunal's ruling. Even if the Philippines achieves a successful legal outcome, who and what will prevent China or any other country from violating ITLOS's decision? Whereas within countries the police the enforce laws of the land, no such police exist at the international level.

Regardless of the legal outcome of the Philippine appeal for arbitration, assuming China ignores ITLOS' ruling, other claimant states are unlikely to seek settlement via international law given the lack of enforcement mechanisms.

Searching for alternative solutions
The international community could, as a matter of emergency, establish a maritime police force to monitor naval activities in the South China Sea. Such a force should omit those claimant states involved in the disputes, relying instead on third parties. However, the difficulty then becomes finding states not only capable of fielding such a force but also willing to volunteer resources. In addition, claimant states must have confidence in the impartiality and reliability of this force so as to provide it (the maritime police force) with the required credibility to carry out its mission. Given the indefinite nature of the South China Sea disputes, it is questionable if an international maritime police force could remain active until the disputes are resolved.

Another option for claimant states, if the option of a maritime police force is unpalatable, is to set aside all questions of sovereignty and resolve to partake in a joint exploration of resources in the disputed region (specifically with regards to the Spratlys). The challenge then becomes one of power sharing -- that is, not all claimant states stand equal with China, holding the most influence in terms of economic and military might, and therefore the country most likely to benefit from such an arrangement. As a result, the power to negotiate and leverage goes to the strongest state, leaving a country like Brunei at a disadvantage.

If the question of sovereignty remains insurmountable, claimant states should at least seek a temporary Modus Vivendi (an agreement between the parties that they agree to disagree), to set aside differences and focus on resolving those matters that can be agreed upon. In dealing with the lowest common denominator, it is hoped that at least some progress can be made. Failure to achieve even this, however, and it is unlikely that the South China Sea disputes can be resolved peacefully.

No silver bullet
Although it is unlikely that a solution to these disputes will be found at the Shangri-La Dialogue, the forum does provide an opportunity for those contesting states to discuss the matter at length behind closed doors, free from political grandstanding and rhetoric.

Delivering the keynote address at the forum will be Prime Minister Nguyen Tan Dung of Vietnam, whose country is also in conflict with China over the Paracel Islands, in addition to the Spratlys. It is likely that he will share his thoughts on the regional disputes and urge fellow contesting states and the international community to assist in bringing these matters to a peaceful resolution.

While there is no single, easy solution to the South China Sea disputes, to do nothing is most certainly not the answer. The Shangri-La Dialogue might not provide an answer to the maritime and territorial disputes; but it will allow countries to share their concerns, talk, and perhaps pave a path towards a peaceful settlement.

(Khanh Vu Duc is a lawyer and part-time law professor at the University of Ottawa who researches on Vietnamese politics, international relations and international law. He is a frequent contributor to Asia Sentinel.) Photo by Abigail Kwok