Why the United States should ‘lead from behind’ in East Asia 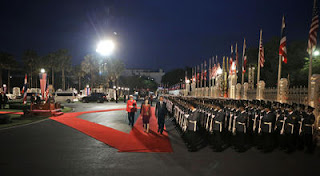 In the United States, the much-dreaded budget cuts known as the sequester went into effect on 1 March 2013
Despite Defense Secretary Chuck Hagel’s gloomy assessment that cuts to the defence budget will ‘harm military readiness and disrupt each and every investment program’, the sequester will neither cripple America’s geopolitical strategy nor its ability to project its hard power abroad.
But the Obama administration should still seriously rethink its ‘pivot’ strategy in Asia in light of the drastic budget cuts. The United States has a vital role to play in the region as a stabilising force, but America’s new pivot strategy must reflect geopolitical realities. The United States should focus on ‘leading from behind’ by prioritising cooperation with other regional powers and by exercising leadership in a more indirect manner.
The Pentagon has already readjusted its priorities through its recent military involvement in Africa. The Pentagon’s official position is that it is merely seeking to monitor terror threats in Northern Africa. Yet some analysts believe that the United States is trying to counter China’s trade and investment in Africa, which currently outstrips its own. If this is the case, such moves are unlikely to help America’s Asia pivot. This is partly because, according to Gen. David Rodriguez, the incoming commander of the US Africa Command (AFRICOM), the United States already has trouble meeting its logistical needs in Africa. But more importantly, America’s covert attempts to contain China’s influence in Africa may backfire by provoking the Chinese into taking countermeasures. There are already some indications that Beijing has interpreted French intervention in Mali as a gateway for further Western intervention.
Thus, in order to achieve stability in East Asia and elsewhere around the globe, the United States should first seek to lead from behind by cooperating with China. Most importantly, the United States should pursue a trilateral dialogue with Beijing to ensure stability on the Korean Peninsula. This may provide insight into Chinese assessments of North Korean political stability, which will be particularly important in light of signs that Beijing may have shifted its policy on North Korea’s nuclear testing since its latest launch.
The United States should also consider formally recognising the DPRK as a sovereign state. Despite opposition from hardliners and the fact that the DPRK has proven to be anything but predictable, normalisation may help to avert a costly, fratricidal war between two Koreas. It would also ease South Korea’s economic burden by fostering trade with the North, and it would help to turn Kim Jong-un away from China by keeping him accountable to international norms. US basketballer Dennis Rodman’s visit to Pyongyang in late February showed that Kim Jong-un may respond positively to carrots.
The United States must exercise indirect leadership by bolstering its existing ties with Japan and South Korea. This will involve assisting South Korea to formulate its own geopolitical and military strategy, in addition to working closely with President Park Geun-hye to forge a unified policy approach to dealing with DPRK provocations. It is equally important that the United States work to defuse deep-seated tensions over both states’ competing territorial claims to the Dokdo/Takeshima islets. This would repair the uneasy alliance between two former enemies and help to prevent future naval rivalries in Northeast Asia. Both South Korea and Japan will continue to play vital roles in preserving stability in East Asia, and must therefore learn to set aside their enmity in the interests of regional stability and economic cooperation.
Last but not least, leading from behind in Asia means that the United States must be prepared to defend itself at home. To that end, it must bolster its missile defence system. The United States may be vulnerable to hostile aggressions from afar following the DPRK’s successful testing of its long-range rocket last December and Iran’s improved missile capabilities. Fortunately, notwithstanding the drastic reductions to its budget, the Pentagon assured defence contractors last August that missile defence would ‘still remain a priority’.
The sequester has made America’s ‘pivot’ strategy unsustainable. The United States must continue to exercise leadership in the region, but it must do so in ways that are less financially burdensome, while taking care to avoid aggravating China. For now, American ‘leadership from behind’ may be the best means of preserving stability in East Asia.
Jeong Lee is a freelance international security blogger living in Pusan. His writing has appeared on Americanlivewire.com, East Asia Forum, and Georgetown Journal of International Affairs. He is also a Contributing Analyst for Wikistrat‘s Asia-Pacific Desk.