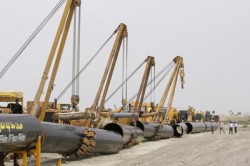 Defying threats of US sanctions, Pakistan’s president, Asif Ali Zardari, and Iranian president Mahmoud Ahmadinejad formally launched construction of the Pakistani side of the Iran–Pakistan gas pipeline on 11 March 2013. Iran has almost completed its side of the work.
The US$7.5 billion pipeline will deliver 750 million cubic feet (21.5 million cubic metres) of gas per day to Pakistan. The gas will be piped from the world’s second-biggest gas field, Iran’s South Pars field, to a delivery point near Gwadar.
The project has long been delayed in the face of US opposition, with the United States warning Pakistan that sanctions may be imposed for doing business with Iran. The United States fears that the gas pipeline will provide Iran with access to a large amount of foreign currency at the same time as the West is trying to reprimand Tehran over its alleged nuclear weapons program. A spokesperson for Pakistan’s Foreign Office argued, however, that ‘being an energy deficient country, the pipeline is in our national interest’.
In Pakistan, there is rare unanimity over completing the pipeline project with Iran, which alone can alleviate Pakistan’s debilitating power shortage — expected to reach 6,500 megawatts this summer. Demand for natural gas in Pakistan has outstripped supply in recent years and put existing reserves under immense pressure. Pakistan’s domestic gas production, currently at about four billion cubic feet per day (CFD), will fall to two billion CFD by 2020, when demand will rise to eight billion CFD. This gaping hole of six billion CFD will only partially be filled by Iranian gas.
The project will support around 4,000 megawatts of power-generation capacity. The agreement became possible when Iran offered US$500 million in funding after several overseas and domestic Pakistani companies pulled out due to fear of US sanctions. Depending on Pakistan’s seriousness, Iran has offered more money for the pipeline and related projects, which are likely to include an oil refinery at Gwadar.
In energy-starved Pakistan, a project that can help the country’s faltering economy and assuage domestic consumers has wider political meaning. In 2011, Dr Abdul Hafeez Sheikh, Pakistan’s then-finance minister who was also heading the Cabinet Committee on Energy, estimated a production loss of about 3 per cent, worth over US$5 billion annually. He also estimated a circular debt of 300 billion rupees (US$3.06 billion) due to energy shortages. And billions are lost in public demonstrations as well. The adverse fallout of a severe energy crunch is likely behind this sudden movement after so much indecision over the pipeline project.
The worsening energy crisis is an important political issue in the lead-up to elections, which are due within the next three months. By signing the deal, the ruling party earns a lot of election time kudos. Yet many question the government’s intentions in signing the Iran–Pakistan pipeline deal at the end of its tenure. It may well be that, at this time, the threat of sanctions is worth the risk because the Pakistan-dependent US withdrawal from Afghanistan has just begun. When over 125,000 containers are expected to pass through Pakistan on their way back from Afghanistan by December 2014, the United States will be reluctant to anger Pakistan and may be compelled to ignore the project — like it did with Pakistan’s nuclear bomb. The United States imposed nuclear sanctions in 1989 only after the last Soviet soldier left Afghanistan. The signing of the pipeline deal now could be a smart tactical move by Pakistan, based on its historical experience.
Pakistan is desperate to be equated with India on civil nuclear technology and is disappointed at the alternatives offered by the United States. Pakistan’s energy needs are too great and the alternatives too uncertain or expensive to wait any longer. However, doubts still remain as to whether Pakistan will be able to complete the project in the face of US opposition. Lurking behind Washington’s opposition to the pipeline could be the fear of its diversion toward China, and Beijing’s plans to link Gwadar with western China. The Gulf Cooperation Council countries are also annoyed at the Pakistani–Iranian embrace. And for the success of the project, peace in Baluchistan is necessary and the situation there remains extremely worrisome.
It will be interesting to see if other countries will spurn the threat of US sanctions, and follow the dictates of their national interest and engage with Iran. But despite the international power play, the Iran–Pakistan gas pipeline is a lifeline for Pakistan’s badly battered economy.
Sajjad Ashraf is a former member of the Pakistan Foreign Service, serving from 1973 to 2008. He now serves as an adjunct professor at the Lee Kuan Yew School of Public Policy, National University of Singapore and as a visiting senior research fellow at the Institute of Southeast Asian Studies, Singapore.
A version of this article was first published TacStrat.