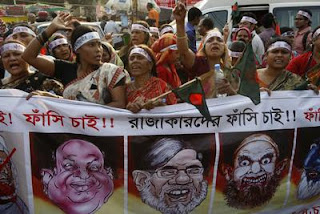 In Bangladesh, the government’s recent willingness to intervene in a verdict handed down by the International Crimes Tribunal (ICT) indicates that the state is in dire need of robust and neutral institutions to safeguard its fragile democracy.
The ICT is a domestic tribunal, run without international oversight. It was established in 2010 to end over 40 years of impunity for the brutal war crimes committed during Bangladesh’s 1971 War of Independence. Its first verdict in absentia on 21 January 2013 sentenced Abul Kalam Azad, a well-known Muslim cleric and televangelist, to death by hanging for war crimes against humanity. Much more controversially, its second verdict on 5 February 2013 sentenced Abdul Quader Molla, a senior member of Jamaat-i-islami (the country’s largest Islamist opposition Party) to life imprisonment for five counts of crimes against humanity, including involvement in the killing of 381 unarmed civilians. This verdict sparked mass protests across Bangladesh, with tens of thousands of people rallying in Shahbag, Dhaka to demand the death penalty for Molla. Protesters have called for a number of actions, including a ban on Jamaat-i-islami and its student wing, Islami Chhatra Shibir, and for further amendments of the ICT Act to prohibit presidential pardons for those convicted by the ICT.
According to media reports, Prime Minister Sheikh Hasina responded to the demands of the protesters by stating that she would talk to the judges to convince them to take the deep sentiments of the protesters into account when formulating their decisions. On 17 February, the Parliament amended the ICT Act to allow the prosecution to retroactively appeal against any verdict in a war crimes case, when previously, only the defense had a right to appeal. It goes without saying that this amendment would allow an appeals court to overturn a life sentence on Abdul Qader Mollah and substitute the death penalty. The amendment also carried a provision allowing the tribunal to try any party and organisation accused of war crimes — namely Jammat-i-islami.
Such moves are profoundly troubling. No democratic government should be able to use their parliamentary majority to change the law in order to enable the imposition of the death sentence. It is also critically important that the ICT maintains its independence in light of the fact that another seven individuals from political opposition parties are also currently on trial. Activists from Jammat-i-islami and other opposition parties like the BNP have already claimed that both of the ICT’s verdicts are politically motivated. Within this precarious political climate, the ICT must not be perceived to be influenced by public and political pressure, regardless of how strong public support for particular verdict may be.
It is crucial that war criminals be prosecuted, but those accused of war crimes deserve justice and should not have their human rights violated in pursuit of this end. Bangladesh might also do well to consider the fact that Human Rights Watch and Amnesty International in Bangladesh have opposed the death penalty in all cases without exception, and that the International Criminal Court and all other international criminal courts established since 1993 have largely excluded the death penalty as a sentence for crimes against humanity, war crimes and genocide. At any rate, the recent government response to the ICT’s rulings indicates that Bangladesh’s democracy is in desperate need of competent and neutral state institutions.
Dr. Syeda Naushin Parnini is Senior Lecturer at the Centre for Democracy and Election (UMCEDEL), University of Malaya.