Grounding of USS Guardian in the Philippines: longer-term implications 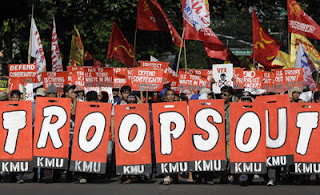 The incident sparked protests, not least of all because the reef is a marine sanctuary protected as a Philippine National Marine Park, and declared as a World Heritage Site by UNESCO.While no oil pollution has occurred so far, the reef in the vicinity of the ship has been seriously damaged. The ship cannot be re-floated and will now be broken up where it lies. The USS Guardian was a 23-year-old Avenger-class minesweeper valued at about US$277 million.

Alongside a major financial penalty arising from the loss of the vessel and the costs of the salvage operation, the US potentially faces longer-term political and strategic costs as well.The incident has already sparked anti-US protests across the Philippines with protesters questioning the reinvigorated US military presence in their country.  Even more serious consequences might lie in regional countries taking a harder line on the operations of warships in archipelagic waters and exclusive economic zone (EEZs).

The US adopts a firm position on navigational freedoms in regional waters and routinely protests rules and regulations of coastal states, including those imposed for environmental protection purposes, which might restrict those freedoms. Some regional coastal states see this stance as disrespectful of their rights, particularly in EEZs.

Accidents such as the grounding of the Guardian do not help the US position, nor do the other navigational accidents the US navy has experienced in recent times. In 2012 alone there were three serious accidents—the collision between the USS Essex and a refuelling tanker, USNS Yukon, off the coast of California in May; the collision between the guided missile destroyer USS Porter and an oil tanker outside the Strait of Hormuz in August; and the collision between the submarine USS Montpelier and the Aegis cruiser USS San Jacinto off the US East Coast in October.

The Philippines is an archipelagic state under the 1982 UN Convention on the Law of the Sea (UNCLOS). The seas within the Philippine archipelago are archipelagic waters through which all ships have the right of innocent passage. But this right is a restrictive one that can be suspended in certain circumstances.

This right also includes some specific limitations on the activities of warships whilst exercising it. Some regional countries, including China, the Philippines and Indonesia, have legislation requiring countries to give prior notification of the innocent passage of warships through their archipelagic waters or territorial sea.

Largely at the behest of the US and other maritime powers, UNCLOS also introduced the right of archipelagic sea lanes (ASL) passage. This is more liberal than innocent passage. It cannot be suspended and allows warships to conduct most of their normal passage activities while exercising the right. But the passage must be conducted along ASLs designated by the archipelagic state, or if no such lanes have been designated, along routes normally used for international navigation.
While the Philippines is yet to designate ASLs, the route apparently being followed by USS Guardian across the Sulu Sea between Mindoro Strait north of Palawan and Sibutu Passage between Sabah and the Sulu archipelago is a likely ASL. It is used extensively by commercial shipping traffic, including by large iron ore and LNG carriers travelling between northwestern Australia and China.

The USN would no doubt argue that the Guardian was exercising the right of ASL passage and not affected by any requirement for prior notification. Yet the incident is likely to reinforce the position of the Philippines on prior notification of warship transit. This will be disputed by the US and likely damage the bilateral relationship.

Warships have sovereign immunity which means they are not bound by the laws of a coastal or archipelagic state. However, most navies will usually follow any environmental restrictions placed by a coastal state. A restriction on navigation through a designated marine park would be the type of restriction that would normally be observed by a warship.

The commanding officer of the Guardian appears to have taken a hard line on sovereign immunity. Press reports suggest that park rangers warned the Guardian by radio that it was nearing the reef, but the ship captain insisted they raise their complaint with the US embassy. The park rangers were later forbidden by the Navy crew to assess the situation.

The most serious political fall-out of the Guardian incident for the US may well be some regional countries taking a harder line on US navy operations in their waters, although any such policy will be hotly disputed by the US on legal and strategic grounds.

Sam Bateman is Senior Fellow with the Maritime Security Programme at the S. Rajaratnam School of International Studies (RSIS), Nanyang Technological University.
This article first appeared as a commentary No. 031/2013.