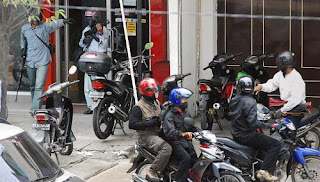 Robbers armed with high-powered weapons escaping from the CIMB bank in Medan in August 2010. Terrorists are increasingly relying on robbing banks and money changers and hacking bank accounts online to fund their activities

One of the terrorist suspects shot dead in a series of raids beginning last Thursday night was a man who fled an explosion at an abandoned orphanage in the capital's outskirts last September.
The 34-year-old Makmur, otherwise known as Bram, was also one of three fugitives from the deadly CIMB bank robbery in Medan, North Sumatra, in August 2010. The incident saw one policeman and two guards killed as terrorists targeted it as a source of funds for a paramilitary camp in neighbouring Aceh.

"(Makmur) is suspected of running a cell that was involved in robbing a bank in North Sumatra. He is also linked to cells in Jakarta and Medan," said a police spokesman, Brigadier-General Boy Rafli Amar, yesterday.

As officials piece together the details emerging from one of their biggest terror raids in months, the links between the newly caught men and those already incarcerated show an intertwined network of terror groups spanning a vast swathe of the Indonesian archipelago - Sumatra, Java and Sulawesi islands. Straits Time PHOTO: AFP