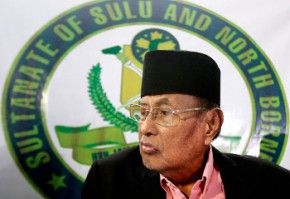 The Philippine Foreign Ministry yesterday reissued a 2008 circular reminding the country's government agencies not to refer to the North Borneo state of Sabah as a part of Malaysia.

The claim isn't likely to sit well in Kuala Lumpur, which is considerably irritated by the invasion of Sabah's Lahad Datu township by 200-odd followers of the Sultan of Sulu, who crossed the strait between Sabah and the Philippine island of Tawi Tawi on Feb. 9 in an attempt to assert the sultan's ancestral claim to the state.

Although the Philippines has always maintained historical and legal rights over the Malaysian state, it has remained in Malaysian hands since it was known as British North Borneo.

After a couple of weeks of indecision, Malaysian security forces assaulted the Filipino group on March 1 with jet fighters and armored personnel carriers. The Malaysians say they killed 62 of the Sultan's men and that 10 police and soldiers have died in the fighting while arresting more than 100 Filipinos on suspicion of having links to the sultan's group.

President Benigno S. Aquino has been criticized for not doing enough to end the crisis peacefully, stating that negotiations are the answer to the crisis, not open warfare as he attempts to walk a careful line between trying to keep a leash on the Sultan's followers while not giving into nationalist sentiment.

Thousands of Filipinos have lived in Sabah for decades. Hundreds have since fled back across the strait in an effort to escape the fighting and roundups by Malaysian security forces. The Philippine government has sought to quell the invasion, arresting 38 fleeing members of the sultan's followers last week as they sought to re-enter the Philippines. The government later filed criminal charges against the group in a court in Tawi Tawi.

Department of Foreign Affairs spokesman Raul Hernandez said the presidential palace issued the memo in 2008, titled "Guidelines on Matters Pertaining to North Borneo (SABAH)," cautioning government agencies against making any statements implying recognition of a foreign state's sovereignty over Sabah, which was described as a Philippine territory.

The circular provides that "No department, agency, or instrumentality of the Philippine government shall make any act or statement expressing or implying, directly or indirectly, any recognition of a foreign state's sovereignty over North Borneo (Sabah) or non-recognition of Philippine title or historical and legal rights to the same." Asia Sentinel