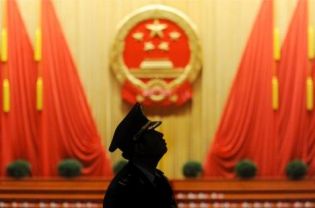 A member of the Chinese military band looks on before the closing session of the National People\'s Congress (NPC) at the Great Hall of the People in Beijing on March 17, 2013. President Xi Jinping said he would fight for a \'great renaissance of the Chinese nation,\' in his first speech as head of state of the world\'s most populous country

Beijing. China’s newly-installed President Xi Jinping said Sunday he would fight for a “great renaissance of the Chinese nation,” in his first speech as head of state of the world’s most populous country.

Xi called for “arduous efforts for the continued realization of the great renaissance of the Chinese nation and the Chinese dream”, in a speech to delegates at the National People’s Congress (NPC) parliament meeting in Beijing.

Calls for such a revival in the world’s second-largest economy have been a motif of Xi’s speeches since he took the top post in China’s ruling Communist Party in November, but he has not given a detailed account of the phrase’s meaning.

He has close ties to China’s expanding military — the navy took delivery of its first aircraft carrier last year — and called for the armed forces to strengthen their ability to “win battles.”

Beijing is embroiled in a bitter territorial row with Japan over islands in the East China Sea, and with neighboring nations over claims to the South China Sea.

Xi also touched on corruption, which infuriates the public and he has called a threat to the party’s grip on power, and urged delegates to “oppose hedonism and flamboyant lifestyles.”

The speech formally brought the almost two-week long NPC meeting in Beijing’s Great Hall of the People to a close, and was followed by China’s new premier, Li Keqiang, stepping into spotlight for a rare news conference.

He took control of the day to day running of the government on Friday, a day after Xi was handed the title of president.

Li rejected US accusations of hacking, after President Barack Obama weighed in on the issue, calling them “groundless”, but said that the relationship with Washington was vital and the two should work to ensure their mutual interests outweighed their differences.

“Conflicts between big powers are not inevitable,” he said.

Li pledged to strengthen economic reforms, saying: “What the market can do, we should release more to the market, what society can do well, we should give to society. The government should be in charge of and manage well the issues that it ought to govern.”

But he did not give any specific examples of planned changes.

Increasing prosperity is a key part of the Communist Party’s claim to a right to rule, and its consensus view is that China needs economic reform to maintain growth, while avoiding political changes which could threaten its grip on power.

The new premier handled the rare set-piece encounter with the foreign press — for which questions had to be submitted in advance — in a relaxed manner, smiling and occasionally joking with reporters.

He also pledged to fight corruption, saying that the government had an “unshakable resolve” to do so, adding: “Clean government should start with oneself. Since we have chosen public service we should give up all thought of making money.”

China’s leaders have come under fire in the last year after reports, suppressed within the country, that the families of top politicians — including Xi — have amassed huge wealth, but have not vowed to make their assets public.

A news conference by the premier, which can last up to three hours, has been an annual part of China’s political calendar for more than two decades.

Last year the then premier Wen Jiabao warned the gathering that China could fall into deadly chaos without “urgent” political reform.

Wen advocated political change during several of his annual press conferences, but such reforms stagnated during his 10 years as premier, while rapid economic growth saw China become the world’s second largest economy.

A career bureaucrat who speaks fluent English, Li, 57, has a more youthful bearing than his stiff party peers. But his real power comes from his position as number two in the Communist Party, where analysts say his lack of close allies means he will struggle to push through reforms.