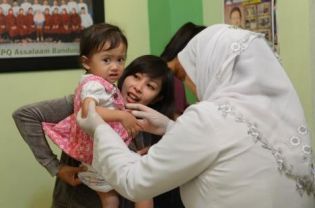 An Indonesian toddler with her mother preparing to have a female circumcision in Bandung on Feb. 10. After the United Nations in December passed a resolution banning female genital mutilation, Indonesia is trying to defend the long tradition, claiming female circumcision is not a mutilation
Bandung. Thrashing wildly, 5-year-old Reta wails as she is hoisted onto a bed during a circumcision ceremony in a school-hall-turned-clinic on Java.

“No, no, no,” she cries, punching and kicking as her mother cups her tear-soaked face to soothe her.

Doctors clap and cheer encouragingly. One of them gently swipes her genital area with antiseptic and then swiftly pricks the hood of her clitoris with a fresh sewing needle, drawing no blood.

The ordeal is over in seconds as other girls and babies waiting for their turn shriek in fear.

Doctors say the procedure will have no effect on the girl, her sexual pleasure in later life or ability to bear a child.

“I’m happy. My daughter is now clean,” Yuli, a 27-year-old seamstress, told AFP at a mass circumcision of 120 girls and babies at the Assalaam Foundation’s Islamic school, in the West Java city of Bandung.

She believes the ritual will nevertheless have an effect.

“Many girls are getting pregnant out of wedlock these days. Circumcision hopefully will prevent my daughter from becoming oversexed, and will make her less amorous when she grows up.”

Indonesia, home to the world’s biggest Muslim population, argues that this form of circumcision is largely symbolic, not harmful and should not be seen as mutilation.

The United Nations thinks otherwise. In December it passed a resolution banning female genital mutilation, which extends to the circumcision practiced in Indonesia.

Procedures such as pricking, piercing, incising, scraping, cauterization or burning that are carried out for non-medical purposes are classed by the World Health Organization as mutilation along with practices that alter or remove any part of the genitals.

The more extreme practices can lead to severe bleeding, urination problems and complications during childbirth, according to the WHO.

A ritual dating back thousands of years and typically seen in parts of Africa, Asia and the Middle East, its most brutal forms require stitching together the inner and outer labia, or excising all or part of the clitoris.

Indonesia says that genital cutting does not take place and that it has worked to eradicate other more severe circumcisions as it seeks compromise between conforming to international standards and placating cultural and religious traditions.

It banned female circumcision in 2006 but backtracked in 2010, arguing that many parents were still having their daughters circumcised but often by unskilled traditional doctors who often botched the procedure.

“It’s impossible to ban a longtime tradition,” Health Ministry official Budi Sampurno said. “When we banned it in 2006, people turned to untrained traditional healers instead. We had to regulate it to ensure the safety of women and children.”

In response to the ban, The Indonesian Ulema Council (MUI), the country’s top Islamic clerical body, issued a fatwa in 2008 allowing the practice but did not make it compulsory.

Religious leaders and adherents say they are following the practices of Prophet Mohammed.

However, “Islam does not force girls to be circumcised,” MUI chairman Amidhan said.

While no official data is available to measure the extent of the practice in Indonesia, it is common in the country of 240 million people, according to aid agencies.

A 2003 study by the Population Council found that 22 percent of 1,307 female circumcision cases were excisions, meaning part of the clitoris or labia was removed. Of the rest, 49 percent involved incisions while 28 percent were “symbolic.”

Researchers say the situation has improved in the past 10 years.

A 2009 study led by Jurnalis Uddin, a doctor and lecturer from Jakarta-based Yarsi University showed that 18 percent of health institutions still performed female circumcisions but that these did not extend to cutting the genital area.

“The situation now in 2013 is certainly different from 2003. People are now more educated about safe circumcision procedures and they also know that they can report harmful methods to the authorities,” Artha Budi Susila Duarsa, a lecturer also at Yarsi who helped devise the 2009 study, told AFP.

“If there is excision, the number must be significantly lower [than in 2003],” he added.

Jakarta issued a 2010 regulation allowing “scraping the clitoral hood, without injuring the clitoris,” while criminalizing more severe procedures — a regulation that is nevertheless defined by the WHO as mutilation.

Islamic foundations like the Assalaam Foundation in Bandung say they ditched the scissor-snipping for pin-pricking.

“In the past, we had used one or two doctors and more traditional healers and they used scissors to snip a bit on the hood. We abandoned that method many years ago,” Assalaam’s coordinator Eulis Sri Karyati said, adding that certified doctors carried out procedures at the school.

Sampurno said Indonesia wants to replace scraping with swiping “with a cotton bud,” hoping that the UN would not see this as mutilation. Jakarta has not indicated how it would enforce it in such a populous nation.

Some reports allude to more severe forms of female circumcision still being carried out in Indonesia, especially in remote areas where the belief is strong that the practice would cleanse girls.

“Circumcision is still taking place and I can’t rule out that more severe forms of circumcision other than pin-pricking could be done by untrained non-medical persons,” she added.

In Aceh province, Indonesia’s Islamic stronghold where partial shariah law is implemented, people are so indoctrinated into the practice that opting out is considered immoral, rights activists say.

“Almost every girl in Aceh is circumcised. Parents see it as a religious obligation and turn a deaf ear to any opposing view and look down on those who don’t circumcise their children,” provincial National Commission on Violence Against Women official Azriana said.

Despite the UN resolution, the custom still has deep meaning for Indonesian Muslims and will likely remain, officials say.

Housewife Tita Lishaini Jamilah, 28, who also took her baby to the clinic for a circumcision ceremony, said Indonesia should not bow to the UN’s ban on the practice, insisting that the ritual was safe.

“Why would any parent hurt her child? If any doctor were to mutilate my daughter, I’d be the first to protest,” she said.