Myanmar-The Lady’s not for turning 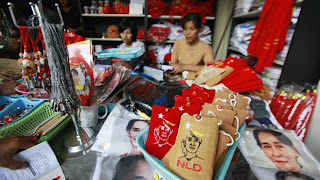 After its first national conference, questions remain about the NLD’s readiness for government

IT WAS a long time coming, but on March 9th Myanmar’s main opposition party, the National League for Democracy (NLD), began its first-ever national congress. In part the three-day event was a celebration of the fact that it was taking place at all.

Scarcely 18 months ago the party, founded in 1988 by Aung San Suu Kyi and others to campaign against the country’s brutal military dictatorship, was officially still illegal. It had for years struggled to survive. Most of its leaders spent stretches in prison or, as in Miss Suu Kyi’s case, under house arrest. Yet now a general election looms in 2015, and the NLD is not only legal, it has a prospect of winning power. It is buoyed by landslide victories in over 40 by-elections for the national parliament held last year. Since President Thein Sein defied his army background and kick-started change in 2011, the pace of Myanmar’s political liberalisation has been stunning.

Yet with the NLD’s new prominence comes fresh scrutiny. One long-time activist says that the party’s “revolutionary period” is over. Now the NLD must show competence. For decades it had held together thanks to shared suffering. Now it must mediate among growing internal factions without falling apart. It must come up with sound economic policies. And it must articulate a national vision for a country racked by ethnic conflicts. That is a tall order with an election 30 months away.

This congress was meant to be a first stab at dealing with some of these issues. Ms Suu Kyi said that the party badly needed “new blood”. Yet she and her colleagues failed to introduce much.
The NLD certainly sought to put its democratic credentials on display. A new central committee of 120 members was elected in as transparent a manner as possible, with the press invited in to observe the counting. The party also made gestures towards “national reconciliation” by, for example, inviting the armed forces’ political proxy, the Union Solidarity and Development Party, to observe proceedings.

More problematic, however, was the election of a new 15-person executive committee that will run the party’s day-to-day affairs, with Miss Suu Kyi in the chair. This is where the new blood is needed, but instead the old guard returned. Its stalwarts have guided the party since 1988, and many are now in their 70s or 80s; all but three were jailed or detained under military rule. Miss Suu Kyi acknowledged that “some fighting” in the party had taken place over the old guard’s refusal to give way, and this now looks set to continue. Khin Lay, a student activist from the early days, argues that “old is not enough to build the party…we need skilled leaders and politicians”.

No one for a moment is suggesting that Miss Suu Kyi, who is 67, is among those who need to be swept aside. She is the figurehead of the democracy movement, daughter of modern Burma’s founder, and revered around the country. In the past, her stubbornness and single-mindedness have been priceless assets. Yet now they might become liabilities. She exemplifies an autocratic style of decision-making in the party that has begun to grate. As Ms Khin Lay puts it, “the Lady says something, and that is policy…and that has not changed”. Indeed, policy was not even discussed at the congress.

The party also did too little to reassure Myanmar’s many troubled ethnic groups that the NLD, made up mostly of ethnic Burmans, is on their side. Party stalwarts point out that seven of the new executive committee are from ethnic-minority groups. Yet power still resides with the Burmans. There are now loud complaints that Miss Suu Kyi has dropped her earlier talk of federalism as a means to accommodate the political aspirations of the Karen, Kachin, Rakhine and others.

In this, Miss Suu Kyi may feel bound by political constraints. She aspires to be Myanmar’s next president in 2015. For that, she needs to continue her rapprochement with old adversaries in the armed forces. Resistance to federalist pressures is one reason why the army does not want to open the 2008 constitution up to revision. But the constitution, imposed on the country in a rigged referendum, also bars the Burmese spouse or parent of foreign nationals from being president—a ban inserted specifically with Miss Suu Kyi in mind (her late husband was British, and she has two sons brought up in England). The next job, says Win Htein, a sprightly member of the NLD old guard, is to mount a national campaign to press the army into changing the constitution. That would be a hard task at the best of times. It will not be helped if the NLD leadership itself becomes an issue among the party faithful. The Economist Print Edition