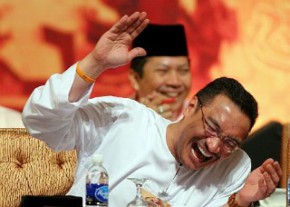 The father of the youth who accused Malaysian Opposition Leader Anwar Ibrahim of sodomy in 2008 apologized to Anwar at a press conference Friday and said the plot to have Anwar arrested was cooked up in the office of Prime Minister Najib Tun Razak.

Azlan Mohd Lazim, 60, accompanied by an official from Anwar's Pakatan Rakyat coalition, said his son, Mohamad Saiful Bukhari Azlan, had been used by what he said was "irresponsible quarters" and that statements that both he and his son gave to the press during and after the trial were written by his lawyer and a special officer in Najib's office. The two were identified as attorney Zamri Idrus, and the special officer, Khairil Annas Jusoh.

Anwar was acquitted of the sodomy charge in a Kuala Lumpur high court in January 2012 although government prosecutors are appealing the case, which has been dubbed Sodomy II. The appeal is to be heard on July 22. Anwar, in 1999 a prospective heir apparent to then-Prime Minister Mahathir Mohamad, was originally convicted in Sodomy I after he fell out with Mahathir and served six years in prison in a case that was universally viewed as cooked up to ruin his political career.

"Anwar is innocent and a victim of this slander... as such I apologize to Anwar and his family," Azlan said in a printed statement. "He and his family have suffered a lot as a result of this slander…I deeply regret all the slander hurled against Anwar, which involved my son Saiful Bukhairi."

Everything, he said, "was planned in great detail by a special officer in the PM's Department. Even the script I read during the press conference after Anwar's sodomy acquittal last year was prepared by this officer."

Azlan's statement is the latest in a series of sensational revelations on either side as Malaysia's Barisan Nasional, or national ruling coalition, and the three-party Pakatan Rakyat opposition led by Anwar's Parti Keadilan Rakyat jockey intensely for position in advance of elections that are expected to be called for mid-April. Deepak Jaikishan, a former close friend of the prime minister's wife, Rosmah Mansor, has delivered spectacular charges that he was enlisted by the Najib family to hustle a private detective out of the country following the detective's revelations of Najib's relationship to a Mongolian translator, Altantuya Shaariibuu, who was murdered in October 2006 by two of Najib's bodyguards.

It is questionable, however, what effect if any Azlan's statement will have. Statements by Deepak and others, including document from a French court that Najib and his close friend Abdul Razak Baginda engineered €150 million in bribes on the Malaysian navy's purchase of submarines, appear to have had little impact on an electorate polarized by two years of feverish campaigning on both sides.

In the meantime, Najib has had the opportunity to look decisive as a national leader in quelling an odd invasion of the eastern state of Sabah by followers of the Philippines-based Sultan of Sulu to reestablish the sultanate. Jet planes and five battalions of Malaysian army soldiers drove the Filipinos out of their Lahad Datu base and into the jungles. Najib later visited the site, gaining widespread favorable publicity.

From the beginning, the case against Anwar, like he first one. was riddled with blatant procedural and other errors that made it clear that the government was out to attempt to once again derail the opposition leader's political career. Among other inconsistencies, Saiful, then an aide to Anwar, went to two hospitals after the alleged rape to complain he had been sodomized but was turned away by doctors who examined him and said they found no evidence of penetration. He finally went to a third government hospital to file the charges. Also, during testimony in the courtroom, he acknowledged that he had met with Najib and his wife, Rosmah Mansor, as well as a top police official and a close friend of Rosmah's in the days prior to filing the charges. Neither the prime minister nor his wife were called to the stand to explain why they met with the youth.

There were many questions about the DNA, which was allegedly taken from Saiful's rectum 90 hours after the reported act took place, during which he said he had neither eaten, drunk nor gone to the bathroom. The evidence was stored unrefrigerated in an unguarded police office.

Government laboratory technicians testified that as many as 11 different DNA traces had been found in Saiful's rectum. At one point the high court judge in the case ruled that the DNA was too doubtful to be admitted, only to have the prosecution appeal, at which point the judge reversed himself, leading to charges he had been coerced.

There were even questions whether Saiful had actually met with Anwar on the date he allegedly was sodomized. Although cameras showed him in the lift of the building where the offense allegedly took place, Anwar said he was meeting with a group of economists in the condo at the time and that Saiful had not appeared in the room, and offered to produce the economists as an alibi.

The case began when the then-24-year-old former aide made the charge against the opposition leader on June 29, 2008, shortly after Anwar had led the Pakatan Rakyat coalition to a historic sweep of five Malaysian states, winning 82 parliamentary seats in 2008 national elections and breaking the ruling Barisan Nasional coalition's two-thirds majority hold on parliament for the first time since the country was founded.

Anwar was arrested at his home on July 16 of that year by a contingent of 10 carloads of police commandos and was locked up overnight in a Kuala Lumpur jail despite the fact that he said he would appear voluntarily at the police station.

Although he was always seen accompanying his son during the trial, Azlan explained that he did so simply as a father who was giving moral support. Azlan said he decided to make his statement today after collecting information obtained during the trial, as well as that sent to him by the public.

"As a Malay and a Muslim, I started to realize the evil of this plan. I don't want to continue to conspire with this malicious slander. I want the people who love this country to know their malicious intention," he said. "If this malicious intention continues, not only the Malays and Muslims would be destroyed, but the nation would be destroyed as well. I do not want to see this happen." Asia Sentinel (With reporting from Malaysiakini)