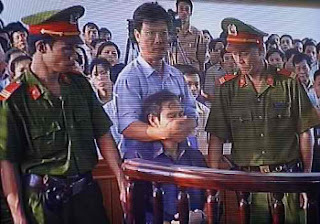 Not exactly freedom of speech

In time Vietnam will change. However, the manner in which it changes will be one for debate

Benjamin Franklin's political cartoon, "Join, or Die," which depicts a severed snake with each piece representing a British-American province or region (with the exception of Delaware and Georgia), was first published on May 9, 1754, in the Pennsylvania Gazette to unite the provincial governments against the French and their Native American allies. Later, during the American Revolutionary War, the same cartoon was used to urge the 113 colonies to unite against the British.

The cartoon was very much a cry for action. Although Franklin's cartoon aimed to impress upon the colonists the importance of colonial unity at the time, "Join, or Die" would come to represent not just resistance and rebellion but also change. When it had become intolerable for American colonists to continue living under British rule, it was time for change.

Whether it is the story of Moses leading his people out of Egypt, or the very recent Arab Spring, the story of humanity – or, to go to the very beginning, the story of life itself – is one of change. If not for Moses, would the Children of Israel have their freedom? If not for the self-immolation of Mohamed Bouazizi in Tunisia, would there have been an Arab Spring as we know it? Certainly without the American colonies in union, their revolution would have been in vain.

For Vietnam, these stories and events in human history offer an important lesson: Change is inevitable, and failure to change when necessary can prove especially violent, as demonstrated by Mohamed Bouazizi's sacrifice or the American Revolutionary War (or any revolution for that matter).

For Vietnam and countries similar to it, the message is clear: Change or die.

Death by failure
Death, not in the literal sense of course, should not be taken as a threat but an opportunity to free oneself from the shackles of old.

Change is not an unfamiliar concept to Vietnam's leaders or its people. Doi Moi, the economic reforms initiated in 1986, helped liberalize the country's economy. The reforms helped transform an isolated, impoverished, and starved country into Southeast Asia's darling economy until the global recession in 2008.

However, these reforms merely addressed the economic failures of Vietnam. Although living standards increased substantially, the political system remained more or less the same; as a result, Vietnam's structural failures remain unaddressed. A lack of accountability and transparency in Vietnam's leadership has fostered corruption and excess, which has undoubtedly contributed to the government's economic mismanagement of Vietnam, leading to its current woes.

With Vietnam's economic downturn, the people's displeasure and distrust of the government, and the government's apparent inability to deal with China over the South China Sea disputes, the conditions appear ripe for change.

Efforts by Vietnam's leaders to appease the people (constitutional amendments that have thus far simply addressed economic failures) have so far fallen short of expectations. Rather that expand upon fundamental human rights, the proposed amendments instead appeared to have expanded restrictions on said rights.

Rather than change for the good, it would appear as if Vietnam's leaders are intent on going in the opposite direction. Change is not a spontaneous act. It is a result of numerous conditions, and in Vietnam, these conditions are coming into play. Rather than adapt to the shifting landscape, Vietnam's leaders have opted instead to preserve the status quo -- the very same that has led to the country's current predicament.

A national responsibility
True change begins at the bottom. It begins with the people who in turn demand change from their political leaders. Unfortunately, such possibilities in Vietnam are limited given its non-democratic system. The voices of the people are not heard, and as such, the country's leaders are free to do as they wish, regardless of protests at home and abroad.

As a result, it is up to the people to not only demand change but effect change. How this would come about is a question only the Vietnamese people themselves can answer. The first question to be asked, and perhaps the most important, is how much they are willing to risk to bring about change in their country.

That the Vietnamese government has permitted a degree of dissent is not an oversight on its part. Rather, one could argue this allowance of dissent is an effort to relieve whatever anger or stress the people hold against their leaders. What harm is there for an individual to repeat what is already known, that the government is corrupt and inefficient? What harm is there for Communist leaders and their friends to have people call them names behind their back. It is only when the individual decides to act against the government, such as fermenting opposition, will he or she then suffer the consequences of "propagandizing" against the state.

This illusion of freedom, then, has allowed the people to express their dissent without actually dissenting. Fines and jail are serious consequences for speaking out against the state, and so the people, many of whom are looking for leaders, stay home because their leaders are in jail or under house arrest.

Waiting for someone to help lead the cause for change is no better than changing for the wrong reasons. It is one and the same, for both are excuses for maintaining the status quo.

Change is not an individual responsibility, although it requires individual sacrifice. Change on a national scale requires a collective effort -- an effort by the nation at large. It requires sacrifice from the common citizen and the powerful elite. Nation-building is an exercise in consensus-building, and without the input of every member and every level of society, why bother at all, for the end result would be a society in which the few oversee the many.

Greater than the fear of government reprisals is the fear of the unknown: Will a new Vietnam necessarily be better? Whether fighting for a new Vietnam is worth the risk -- security, personal, or otherwise -- is a question the individual must answer. But whether Vietnam can change is a question for the nation. Taken together, these are questions that must be answered quickly.

Although change is not spontaneous, those who are unprepared for it often suffer the most.