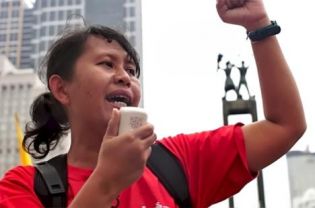 The American Chamber of Commerce in Indonesia, already alarmed over a protectionist draft trade bill, is now growing concerned about new legislation before the Indonesian House of Representatives to update the country's Industry Law.

Critics say the language in the updated law is designed to protect Indonesian industry at the expense of multinationals. As with the draft trade law, multinationals are concerned that the new industry regulatory framework, which is aimed at updating the regulations governing manufacturing in the country, will constrict investment and cut into market access for foreign investors.

Taken together with a wide variety of other measures and regulations put in place over the past year, the new regulation appears to represent a broad onslaught against foreign companies investment.

"Looked at in full with the trade bill, this amounts to a full-on assault on free trade and WTO standards," said an American consultant based in Jakarta. It dovetails with other measures that multinationals are struggling to deal with, including one requiring that companies doing business in Indonesia direct their transactions through Indonesian banks.

Yet another measure being debated in the House of Representatives would cut the foreign ownership of Indonesian banks to a maximum of 40 to 49 percent from the current 99 percent, and would also introduce a so-called reciprocity principle giving Indonesia the right to implement barriers to foreign banks similar to those imposed on Indonesian banks overseas. Foreign bankers warned that should the provisions become law, banking authorities in foreign countries would be tempted to impose more barriers against Indonesian banks doing business in their countries.

Amcham Indonesia, which represents the interests of 250-odd companies doing business in the country, said foreign participants have been kept out of the process of drafting the industry law, as they were in the process of drafting the trade law. And, the organization said, while the details are yet to be worked out, the law "has several articles that potentially violate the World Trade Organization's (WTO) principle of non-discrimination," Amcham said in an analysis. "A country should not discriminate between its trading partners, giving them equally ‘most-favored nation,' or MFN status, and it should not discriminate between its own and foreign products, services or nationals, giving them ‘national treatment.'"

Some clauses in the new industry law allegedly violate the "free and fairness" principle, which discourages unfair practices such as export subsidies and dumping products at below cost to gain market share, the Amcham report said.

"In general...we find that the draft law is moving away from the non-discrimination principle and does not always embody the spirit of creating a more competitive domestic manufacturing sector, as it purports to do," it continued.

Indonesia has been the focus of growing investor concerns over economic nationalism for months. Billions of dollars in investment by foreign companies including mining and oil concerns are being held to ransom by the government. Freeport McMoRan, the Colorado-based mining giant, reportedly has US$12 billion in investment in Indonesian operations stalled. Other oil and mining operations have as much as US$50 billion held up waiting to be invested.

The question is whether eventually this misguided economic policy will come home to roost, and possibly it already has. The rupiah has been depreciating steadily against the US dollar. It faces a fast-shrinking current account balance and inflation is creeping up. So far, that hasn't deterred international investors, who continue to flood into the country.

Amcham points to several articles in the proposed industry law, including ones that allow the government to prioritize the provision of natural resources for domestic companies over foreign ones, demands the application of Indonesian National Standard (SNI) certification of products, which "enables discriminatory behavior, and discourages imports due to the extra testing and certification burdens," and which give preference to domestic companies for government tenders in certain circumstances, which "is not in line with free and fairness concepts, and thus potentially violates WTO regulations.

Others give preference for domestic products in the government procurement process, allow measures to protect domestic industry from global competition, business climates and regulations, restrict small business ownership and other culturally important industries to Indonesian citizens, limits the extent to which the private sector can provide meaningful advice and input on new regulations, and potentially creates an unpredictable business environment, which violates WTO protocol.

"Foreign companies, investors and governments should be confident that trade barriers would not be raised arbitrarily," the Amcham letter states. A final article essentially criminalizes non-compliance with mandatory SNI requirements. Asia Sentinel