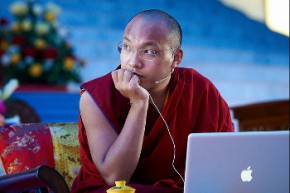 Ogyen Trinley Dorje, the 17th Karmapa Lama, arrived in India in January 2000, literally moving from his 12th century headquarters in Tibet onto the front page of international papers. Now, imagine a setting where, as a 28-year old teacher, he holds a few thousand people from all over the world under a spell for a few weeks.

This is precisely what the Karmapa, the head of the Black Hat sect of Tibetan Buddhism and Tibet's second-most-powerful religious figure, after the Dalai Lama himself, has been doing every winter in Bodhgaya, India.

The size of the gathering at the place of Buddha's enlightenment belies the fact that the Karmapa has been accused by Indian media of being a Chinese spy and of financial irregularities, though all charges have since been dropped as unfounded.

Meanwhile, the Indian government continues to keep him under a close scrutiny and bars him from traveling abroad (he has only been overseas twice), refusing to give permission to visit his monastery in Rumtek, in the Indian state of Sikkim.

The problems, however, have failed to dent his determination. His work over the past decade in everything ranging from arts to environmentalism is beginning to bear fruit.

Although what begets attention is his political and religious role, he is very much an artist at heart. He authors poems, writes and directs plays based on ancient Tibetan stories, composes music, and has even performed the lama dance, quite a rare thing for a high-ranking Tibetan monk. Every year at the New Year gathering, he has regularly distributed cards with paintings and calligraphy to his diverse group of followers.

"Whatever he does, he has a great artistic sensibility," says Jamyang Dorjee Chakrsihar, a former civil servant who worked with the Karmapa when he first arrived in India. "He brings that sensitivity to whatever he does."

His interest in the arts is not unprecedented. Many of his predecessors had been gifted artists and polymaths, some of them considered among Tibet's most accomplished artists such as the 10th Karmapa, whose art is prized and exhibited in museums around the world.

In 2010, for instance, the Karmapa wrote and directed a play based on life story of Milarepa, the 11th century Tibetan mendicant, performed by the artists from the Dharamsala-based Tibetan Institute of Performing Arts (TIPA).

"I think what the Karmapa is doing is impressive," says Sonam Phuntsok, artistic director of the TIPA. By merging performing art with spirituality, the Karmapa is not doing anything new, Phuntsok says, because he is merely trying to restore something that was already a part of Tibet's spiritual culture but had been lost out of neglect. Yet of his many activities, his biggest achievement so far, it seems, has been in the field of the environment. His mission: raising awareness for environmental challenges - melting glaciers, deforestation and depletion of resources - of particular importance to the Himalayas and Tibet.

He has been using the year-end gathering -- which now attracts more than 6,000 people, up from a few hundred a decade ago -- to spearhead ethical change in the community, put his vision into action in all realms, including the environment.

"The emphasis on biological diversity, including ecosystems—in particular, the understanding that animate and inanimate beings are parts of a whole—resonates closely with Buddhism's emphasis on interdependence," he wrote in an article published in the Journal of Conservation Biology in 2011.

In Bodhgaya, he would often take time away from his formal duties to specifically speak on his passion. Like a management consultant in maroon robes, he could be seen doing a PowerPoint presentation, attempting to explain the nuances of environmental science in Tibetan to young monks.

He works with the Washington-DC based World Wildlife Fund (WWF), the world's largest conservation organization, to educate the members of his community on environment and has also addressed the Mind and Life Institute, a prestigious forum of exchange between Buddhists and scientists, about his vision for the environment.

Stephanie Kaza, a professor at the University of Vermont and a specialist on Buddhism and ecology, says that the world needs to know more about the Karmapa's environmental work.

When he arrived in India, the odds were stacked against him. He has not only managed to overcome the challenges but has succeeded in living up to the expectations of his followers.

"I could not but marvel at his poise," says Swati Chopra, New Delhi-based writer, who has met the Karmapa. "He seemed to have weathered crisis after crisis, and yet had the stillness of mind" to be work for the benefit of others.

Education has been his top personal priority. He has been pursuing his studies, receiving a wealth of teachings from the senior lamas, including the Dalai Lama (receiving religious transmissions from gurus is central to the lineage-based tradition of Tibetan Buddhism.)

"Without receiving teachings from his gurus, there was the risk of him becoming a Karmapa in name only," says Chakrsihar, who holds the Guinness Book of Record for the longest piece of calligraphy.

If anything, the apple-cheeked teenage monk who arrived in India almost a decade ago has now transformed into a powerful teacher and a highly effective leader. His two trips to the US, in 2008 and 2010 were considered highly successful. Last month, he released perhaps his most important book to date, The Heart is Noble: Changing the World from the Inside Out, published by Boston-based Shambala Publications.

Best-selling author and neuroscientist Daniel Goleman says the book "shares (the Karmapa's) deep wisdom and compassion as a lens on topics ranging from global hunger to healthy relationships and to the meaning of life" and "that bringing a noble heart to whatever we encounter enriches everyone."

Like a good leader, the Karmapa is adept at juggling his many roles. He is as much at ease in his role as an environmentalist as he is as a religious guru and a teacher, often exhibiting a level of maturity normally expected only from people twice his age.

On other occasions, he would also comment on many topics - society, science, ethics and politics. For instance, in the wake of self-immolations inside Tibet, he has criticized the Chinese government's policies inside Tibet.

Notwithstanding his other duties, he is still the religious leader, perhaps the most difficult job to have in the modern world. In the wee hours of the morning in Bodhgaya, the Karmapa, in his role as a guru, would amble towards his throne accompanied by somber-looking assistants.

Rich music would blow forth to mark his arrival while incense would perfume the air. The steps on the stage of the pavilion would be decorated by religious rigmarole - statues of Buddha, scroll paintings, flowers and ritual cakes made of butter - evocative of a medieval ceremony.

The Karmapa would deliver his lectures, commentaries on elegant texts, and give empowerments - aimed to open the gates to certain Buddhist spiritual practices. Yet translators in 12 languages would jump into action, speaking animatedly into their microphones (they would be webcast live around the world). The Indonesian translator would be having a field day conveying Gampopa's 12th century masterpiece, Jewel Ornament of Liberation, into Bahasa Indonesia.

Long hours would often wear on the young teacher, and sometimes, a bad flu would take a toll on his otherwise rich baritone voice, making him as sound as vulnerable as he is powerful.

The Karmapa had fame thrust upon him since the age of six when he was plucked away from a village in Eastern Tibet as the reincarnation of the Karmapa. He has indeed come a very long way.

(Tsering Namgyal, a journalist based in New York City, is the author of a forthcoming biography of the 17th Karmapa Ogen Trinley Dorje. He is at work on a novel.)