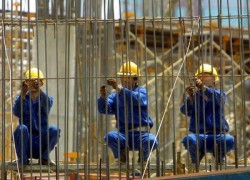 By the end of 2009 Chinese engineering companies were involved in projects worth US$15.4 billion in Vietnam, making the Vietnamese market their largest in Southeast Asia.
On occasion, Chinese contractors have even accounted for up to 90 per cent of EPC (Engineering/Procurement/Construction) contracts for thermal power plants in the country. Two major factors account for the spectacular rise of Chinese engineering contractors in Vietnam: the conditions attached to the concessional loans and preferential export buyer’s credits that China provides Vietnam, and the ‘flexible’ business strategies of Chinese contractors.
While Chinese grants to Vietnam since 1991 have been limited, concessional loans reached as much as US$500 million by the end of 2010. China’s preferential export buyer’s credits for Vietnam have also been increasing, reaching US$1 billion by the end of 2008. But for Vietnam to receive China’s concessional loans, as well as preferential export buyer’s credits, it has to use Chinese contractors, technology, equipment and services for related projects. Such conditions have undoubtedly contributed to the rise of Chinese engineering companies in Vietnam.
Meanwhile, for projects funded in other ways and that are open to international bidders, there are loopholes in Vietnam’s Law on Tendering that favour low prices over technical aspects. As Chinese contractors are able to offer a markedly lower price than competing bidders they enjoy a competitive advantage. The problem is that after being awarded the contract Chinese companies often try to save costs by persuading project owners to change the contract’s original terms, or even by just ignoring them.
It’s not surprising, then, that the dominance of Chinese companies has produced a number of serious problems for Vietnam.
First, there have been numerous reports in the Vietnamese media of poor performance by Chinese contractors. The most common problems come from the contractors’ failure to ensure quality, their inability to keep deadlines, or the violation of contractual terms and conditions. These additional costs for Vietnamese project owners have hindered the sustainable development of Vietnamese infrastructure.
Second, the condition that projects funded by Chinese preferential loans and export buyer’s credits must import technology, equipment and services from China has contributed to Vietnam’s perennial trade deficit with China. Vietnam’s trade deficit with China, for example, increased from US$9 billion in 2007 to US$16.4 billion in 2012.
Finally, Chinese contractors prefer to use Chinese labourers, which means Vietnamese workers miss out. Chinese contractors explained their preference for Chinese workers by referring to the language barrier, their lack of trust in Vietnamese labourers, and Chinese workers’ more advanced skills.
These problems have significant implications for Vietnam’s economic and political relations with China. First, Vietnam’s dependence on Chinese contractors has generated concerns about Vietnam’s national security, especially energy security. The delays and poor quality of power plants constructed by Chinese contractors have further exacerbated the country’s power shortage.
Second, the presence of Chinese workers, whether legal or illegal, has caused public resentment in Vietnam. As well as fuelling perceptions that local labourers are at a disadvantage, the presence of Chinese workers has caused security concerns. There have been reports of Chinese workers breaking laws, causing social disorder, or even engaging in violent confrontation with local communities. The presence of hundreds of Chinese labourers working for the contractor Chalieco at aluminum plants in the Central Highlands has elicited objections from high-profile figures in Vietnam — including war hero General Vo Nguyen Giap, who argued that the large numbers of Chinese working in the Central Highlands would give China a foothold in this strategically important area of the country.His argument was one of the rationales behind strong protests mounted by Vietnamese civil society against bauxite mining in the Central Highlands.
Third, the poor quality of a number of their projects has created a negative perception of Chinese contractors among a large segment of the Vietnamese population and triggered official responses from Vietnamese organisations and policy makers.
The Ministry of Planning and Investment is revising the Law on Tendering to allow project owners to disqualify bidders who offer low prices but seem unlikely to provide a quality service. The revised law also provides that the winning contractors not be allowed to use foreign workers for jobs that can be done by Vietnamese. It also puts restrictions on imports of goods and equipment that are locally available. Such provisions, once passed, will undermine Chinese contractors’ competitiveness in Vietnam.
Since the normalisation of relations between Vietnam and China there has been growing economic interdependence between the two countries, which is a key foundation for a peaceful and stable relationship between them. But interdependence has come at a cost. The dominance of Chinese contractors has generated hostility in the Vietnamese public and further deepened its distrust of China.
Le Hong Hiep is a lecturer at the Faculty of International Relations, Vietnam National University, Ho Chi Minh City, and is a PhD candidate at the University of New South Wales, Australian Defence Force Academy, Canberra.
A version of the article was first published in the Institute of Southeast Asian Studies.