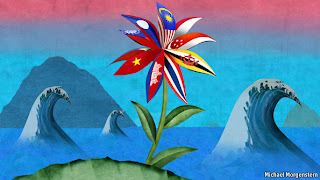 Om Swastiastu ...
This edition of Bali Update marks the 15th Anniversary of Bali Update. We’re delighted to have you on board!
Full text version http://www.balidiscovery.com/update/update861.asp
Read more:

Lead news stories this week: High winds cause damage in several parts of Bali; a foreign tourist goes on a shooting spree in Legian; residents in East Bali kill a “crazed” monkey blamed for a series of fierce attacks on local farmers; a young Balinese girl pays the price for trying to ride a motorbike and send an SMS at the same time; and there’s no end in sight for the water shortage plaguing Jimbaran.

This week we take another critical look at the continuing saga of the Tanah Ampo Cruise Terminal in East Bali.

According to a survey, Bali is no longer the most preferred overseas holiday destination for Australians.

The governor’s race in May is back in the news. The Bali Media Association accuses a major daily paper of unbalanced reporting and bias. Bali tourism leaders call on the governor to practice a more participatory form of leadership with the Island’s tourism professionals.

In other news: The Disaster Mitigation Agency warns that Bali’s north shore is at high risk of tsunami; Indonesia’s first solar power generating center opens in East Bali; and accusations are laid that foreign photographers working illegally are being hired to shoot branded hotels.

Read also how Mozaic Gastronomique in Ubud has been named to Pellegrino’s list of Asia’s Best 50 restaurants.

There are also plans to revive a much-cherished 500-year-old love story from North Bali in order to boost tourism to that region.

Hotel news this week introduces a new executive chef at the Swiss-Belhotel Rainforest; introduces exciting new cocktails at Sundara – the beachside venue at Four Seasons Resort at Jimbaran Bay, shares details of a blind-folded dinner planned for St. Regis Resort for Earth Day; and repeats a call by the head of Bali’s Hotel and Restaurant Association to stop building hotels in order to preserve the Island’s unique cultural heritage.

We also have an update on the intense competition underway for commercial retail space at Bali’s renovated airport.