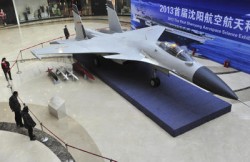 It was the Year of the Dragon in 2012, and China’s defence aviation industry took advantage of its astrological fortune

Chinese manufacturers flight-tested three ‘secret’ military aircraft programs. They unveiled a wide array of new airborne weapons and air defence systems. They continued to invest significant resources to develop military engine technology, drone programs and their components. In the fighter arena alone, the defence industry has been developing a diverse portfolio of new designs — from updating and modernising its ‘legacy fighters’ to developing indigenous ‘fourth-generation’ fighters, and potentially breaking into the ‘fifth-generation’ aircraft market. The recent unveiling of China’s next-generation fighter aircraft prototypes, the J-20 and J-31, along with the development of the J-15 carrier-based fighter and the accelerated modernisation of the Chengdu J-10 and Shenyang J-11 fleets are telling. These advances indicate the growing sophistication of Chinese combat aircraft and the ongoing transformation of China’s defence aviation sector.
Over the past decade, China’s aviation industry has transformed its science, technology and project management capabilities. Companies that focused on reverse-engineering Soviet aircraft as recently as the late 1990s are now developing and producing indigenous models, narrowing China’s once-wide technology gap with advanced aviation powers. Notwithstanding some persistent weaknesses, the industry can now manufacture nearly every type of platform and system that China’s defence requires. In the process, the industry’s ability to innovate has leapt ahead. While once they were trapped in static patterns of imitation, China’s manufacturers now produce items showing creative adaptations and signs of architectural innovation. This includes both selective upgrades and integration of existing indigenous technologies and experiments with next-generation design concepts.
These important advances owe to the implementation of a multi-pronged strategy across the sector’s largest defence-industrial group, Aviation Industry Corporation of China (AVIC) and its five core prime contractors: Chengdu Aircraft Industry Corporation, Shenyang Aircraft Corporation, Hongdu Aviation Industry Group, Xi’an Aircraft Company and Changhe/Hafei Aviation. This strategy has included corporate reforms and organisational restructuring, coupled with sustained investment and expansion. China’s aeronautic development strategy has also focused on key projects, such as indigenous platform and critical sub-system programs, and on building research, development and innovation capacity. Finally, this strategy has aimed to integrate civil and military aircraft manufacturing and leverage international commercial partnerships and acquisitions.
As AVIC upgrades its existing third- and fourth-generation fighters, it is also focusing on next-generation stealth fighters (J-31) and strategic transport aircraft (Y-20), designed to complement the PLA’s long-term military transformation. These programs are currently in their development stages and have yet to overcome technical hurdles — AVIC is finding it particularly difficult to integrate reliable high-performance power plants. Nevertheless, these programs represent the Chinese defence industry’s growing potential for innovation.
Yet, achieving a disruptive form of innovation that would lead to major breakthroughs is still constrained by a lack of high-end technologies — particularly in ensuring the structural strength, quality control, process standardisation, and material selection for engines required for the next-generation aircraft. These weaknesses, along with systems design, integration and management problems, result in frequent design modifications, cost overruns, prolonged testing and, subsequently, delays. Accordingly, Chinese fourth-generation fighters such as the J-10, JF-17/FC-1, and Su-27SK/J-11 and J-11B still rely on the Russian- and Ukrainian-made jet engines. But given the continued injection of assets and government R&D funding of aero engine development — for 2011–15 AVIC has announced it will invest RMB10 billion (US$1.53 billion) in jet engine development — it is likely that AVIC’s aero-engine sector will make considerable progress.
There are also persistent structural barriers to innovation. In particular, corporate fragmentation means AVIC’s central authority finds it difficult to secure compliance with its plans from units below. In principle, under the group’s reformed management structure, AVIC’s head office in Beijing is responsible for deciding the group’s overall strategy, allocating resources and setting financial targets. The job of specialised subsidiaries is to integrate and rationalise the group’s product lines, and plants and institutes are to focus on operations.
In practice, however, local facilities are often reluctant to cede power directly to the new subsidiaries. These subordinate AVIC units rely heavily on support from their regional and local governments, which often retain control over their operations and whose interests differ from those at the top of the AVIC group. The distribution of contracts and roles across companies within the group often reflects bureaucratic decision making and inter-ministerial bargaining rather than a competitive bidding process or other form of coordination.
In spite of these challenges, since 2008 AVIC has transformed itself, taking steps toward its long-term strategic goal: to ‘actively merge’ into the global top tier of aviation industry firms, such as Boeing, EADS, BAE Systems and Dassault. In 2012, the results of these efforts became visible in major technological advances, including new products and program milestones.
Alanna Krolikowski is a PhD candidate in international relations at the Department of Political Science, University of Toronto.
Michael Raska is a Research Fellow at the Institute of Defence and Strategic Studies, a constituent unit of the S. Rajaratnam School of International Studies (RSIS), Nanyang Technological University, Singapore.