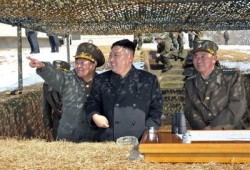 North Korea’s recent nuclear test was a stark reminder to China that the days of a ‘lips and teeth’ relationship with Pyongyang, of Mao Zedong and Kim Il-sung half a century ago, are long gone
Nuclear test after nuclear test, missile test after missile test, Pyongyang has time after time ignored Beijing’s pleas not to take provocative actions.
The humiliation, loss of face and strategic cost of the Korean tail wagging the Chinese dog has sparked renewed debate in China about whether its ties to North Korea are a strategic asset or a liability.
Many prominent Chinese national security analysts have made compelling cases for ‘cutting North Korea loose’ for several years. Most recently, Shen Dingli, dean of Fudan University’s Institute for International Studies, made a bold argument for China to stop enabling North Korea in Foreign Policy magazine. Yet, to date, Beijing continues to follow a flawed strategic logic. This persists, as we have seen recently in China’s reluctance to support South Korean and US efforts to apply tougher sanctions on North Korea as a response to its nuclear test.
All four major powers involved in the Six-Party Talks have overlapping interests in regard to North Korea: no nukes, no war, no collapse. The problem is that China gives ‘no collapse’ top billing, prioritising stability at any cost. But the United States and others put ‘no nukes’ at the top of the list. Thus, even as the interests of five of the six parties intersect, China has made a strategic choice that puts it at odds with the majority.
China now accounts for 70 per cent of North Korea’s trade, keeping Pyongyang afloat by providing food, oil and other essentials. Yet Beijing is in a difficult position: the only leverage it can use would likely cause political instability in North Korea. Avoiding a collapse and sustaining North Korea as a buffer against US-allied South Korea is the essence of the strategic choice China has made. Thus, it appears willing to tolerate a few nukes if that is the price of stability. To its credit, China has sought to persuade North Korea to reform for three decades, taking Kim Jong-il on a visit to Shenzhen in 1983.
Despite being guided by the juche ideology, Pyongyang has no choice but dependence on China, yet the North Koreans still resent their giant neighbour. And China sees the North as at best a necessary burden and embarrassment. They know if they adopt the sort of opening that China and Vietnam have pursued, the regime and its ruling myths and tight control will collapse. North Korea has spent 34 years trying to perfect nukes and missiles and will not surrender what is their insurance policy.
These realities leave China with several dilemmas: strategic, political and moral. Managing the North Korea question should be a showcase for US–China cooperation. But instead, it is often a source of friction in perhaps the world’s most important bilateral relationship. Apart from the burden of sustaining North Korea, China’s ties with Pyongyang have an increasing strategic cost. South Korea and Japan are bolstering their respective ties to the United States, as was seen recently when Japanese prime minister Shinzo Abe visited Washington. Both are cooperating with Washington to build effective missile defence systems and attaining other weapons systems that make China uncomfortable. Then there’s the moral dimension of North Korea’s notorious human rights abuses.
To the degree it systematically avoids joining the global economy, North Korea’s future is dubious. The Soviet Union had 30,000 nuclear warheads, and that did not prevent it from collapsing. China’s enlightened self-interest would be better served by working more closely with the United States and South Korea to manage the North Korea question. China’s fears of US troops on the Yalu River in the event of a unified Korea are overblown. The United States and South Korea comprehend China’s interests, and an understanding about a US military role post-unification could be reached. And a new, more cooperative security dynamic in Northeast Asia would be in the realm of the possible.
Robert A. Manning is a senior fellow at the Brent Scowcroft Center on International Security and the Strategic Foresight Initiative, the Atlantic Council.
A version of this article first appeared on  the Global Times website.