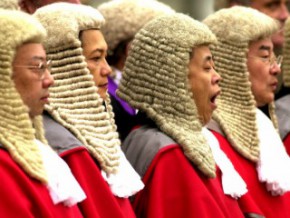 The judges of Hong Kong's Court of Final Appeal have surrendered to their own self interest in refusing the rights of foreign domestic workers to apply for permanent residence.

The five judges ruled unanimously Monday against Philippines appellants Evangeline Banao Vallejos and Daniel Domingo, who argued that foreign domestic workers should have the same right to permanent Hong Kong residency as white-collar expatriates after working in the territory for seven years.

In a case which set natural justice and the simple, direct language of Hong Kong's Basic Law or mini-constitution, against political pressures, the judges could well also be accused of rank racism.

The government was threatening to take the case to Beijing's National People's Congress for an interpretation of the Basic Law should the judges rule against the government's insistence that the foreign domestic workers had no right even to apply for permanent residence, let alone to be granted it. So the bench, in unison, and in order to prevent the government undermining its authority, opted instead to undermine basic principle of justice.

They resorted to the typical lawyer trick of pretending that plain words did not actually mean what they said but something entirely different and supposedly in the minds of those who drafted the Basic Law two decades ago.

The law very simply states that anyone who has been ordinarily resident in Hong Kong for more than seven years has the right to apply for permanent residence. Whether they get it or not then depends on the degree of commitment to Hong Kong they can show. These tests have been very lenient and almost anyone with the seven year qualification could receive it. Indeed that remains the case with the assorted foreign bankers, chefs, forex traders and Pilates instructors etc who receive that right and thus can only be expelled for some heinous offense.

However, the word-twisting judges have deemed that somehow foreign domestic workers cannot be deemed "ordinarily resident" in Hong Kong, however long they live there, despite the fact that they are in regular employment and are only entitled to have holidays outside the territory for two weeks every two years. Anyone else can be outside Hong Kong for two months a year and still qualify.

The difference between the two categories of workers, domestic and all others, is not actually one of income or ability. It is primarily one of race. Thus the judges, all Chinese or Caucasians, deem all the domestic workers to be of a lower species of humanity. All of them are brown skinned people from other parts of Asia, mainly from Indonesia and Philippines plus a few from Sri Lanka, Thailand and India. Mainland Chinese are not allowed to become such workers because it would condemn them to this lower status and so would be unthinkable to the authorities.

When a few long-resident domestic workers first went to the courts to appeal against a government decision not even allowing them to apply for permanent residence, the government launched a barrage of scare stories that tens if not hundreds of thousands of these non-Chinese people would get such residence. That in itself was nonsense because only a minority would even have the basic qualification to apply, relatively few would probably want to as they are in Hong Kong to earn money not because they want to leave the Philippines permanently, and then would face the hurdles of proving they had made Hong Kong their permanent home. But no. the government wanted to raise a specter of alien brown races becoming a larger part of society. Secondly it wanted to threaten the judiciary which claims to be independent but knows that the government will use Beijing to overturn its decision should it feel so inclined - Hong Kong is thus effectively subject, if the government so desires, to the Communist dictum that the judiciary is subservient to, not a separate branch with powers of its own. Thirdly it recognized that once domestic workers had permanent residence they would be free to take any employment, not be condemned to the low wages and limited rights of these particular contract workers.

As it is, the government largely fails to enforce laws which are supposed to provide minimum wages, days off, working hours and living conditions for them.

Those who attempt to seek redress are liable to face dismissal by their employer, in which case they have only a short period to find another job. Thus the cost of complaint is likely to be ruinous. This situation is quite deliberate and could easily be remedied by proper law enforcement and small changes in immigration rules. But the authorities, who now clearly include the judges of the Court of Final Appeal, prefer that Hong Kong's middle and upper classes can enjoy cheap and dispensable domestic labor in semi-servitude - so long as they are brown Asians.

The situation is likely to get worse rather than better now, and not just because of the judges. The Hong Kong government has recently agreed with Bangladesh to take in some such workers. Given the very low wage expectations of Bangladeshis, many are are almost certain to be paid far less than the supposed minimum. That was the case when Indonesians, with lower expectations and lower awareness of their rights, began to come in large numbers and have now overtaken Filipinos who are better organized to represent their interests.

The 300,000 domestic workers now account for some 7 percent of the local workforce, an indication of just how important they are for boosting the living standards of the rest of the community - other than the bottom 20 percent of the local population who cannot get even menial jobs because of them.

The domestic worker situation is a serious blot on Hong Kong's reputation as a fair and civilized society and its top judges have just ruined their own reputation for justice and being above politics and racial prejudice. They have brought justice into contempt. Asia Sentinel