How can Japan navigate the Senkaku dispute and China’s rise? 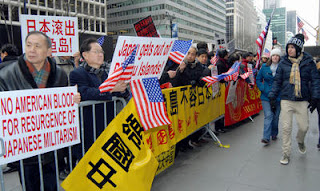 Two centuries ago, Napoleon Bonaparte is said to have warned against waking up China. Japan is now experiencing the true meaning of this remark, particularly after a series of recent Chinese provocations around the Senkaku Islands
China claimed ownership of these islands (which it calls Diaoyu) in December 1971 for the first time in history, and the dispute has now come to symbolise for Japan the uncertainty of China’s rise.
In September 2012, the Japanese government decided to terminate the lease agreement that had been in effect since 2002 for the islands, purchasing three of the main ones from their Japanese owner. The purpose was to prevent Shintaro Ishihara, then governor of Tokyo, from buying the islands. The government did this in the hope of controlling the islands and Japan’s relationship with China in a calm and peaceful manner.
Tokyo was optimistic and believed that Beijing would understand its gesture. But this assumption turned out to be seriously wrong. According to Japan’s Ministry of Foreign Affairs, between September 2012 and February 2013 a total of 83 Chinese government vessels violated the waters around the Senkaku Islands as many as 25 times. In December 2012, the Japanese Air Self-Defence Force scrambled a Chinese State Oceanic Administration aircraft that flew over the islands. And in late January 2013, the provocation escalated dangerously when a Chinese navy vessel locked a fire-guiding radar on a Japanese Maritime Self-Defence Force escort ship.
Although the decision-making process of what appears to be a strategic shift for China is opaque, the implications are clear. Wrapped up in the conflict and the rise of China are two major challenges for Japan and the rest of Asia. First, China’s wish to restore the ‘greatness of the Chinese people’ appears contextually important. This is explicit in the Chinese claim that the islands (both the Senkakus and those in the South China Sea) have belonged to China since ‘ancient times’. Mixed in with this outlook is China’s unique nationalism, which combines a deep sense of humiliation about its modern history from the Opium Wars onward and a deep sense of national pride in its spectacular rise.
The second challenge is China’s belief that the questions of sovereignty and territorial integrity constitute Chinese ‘core interests’. Many thought at the end of the Cold War that the time of traditional power politics was over and that non-traditional security threats would soon take centre stage. Japan also began to focus more intently on multilateral security issues, including its contribution to UN peacekeeping operations. But the defence of Japan’s territorial integrity has now surfaced as a critical national security issue.
Amid this historic shift in Asia’s security environment, Japanese voters chose Shinzo Abe, a self-professed conservative patriot, as their new prime minister in December 2012. Lacking any real ability to deal with China’s rise unilaterally, strengthening Japan’s alliance with the United States is a natural response for Abe. In his recent trip to Washington for a summit meeting with President Barack Obama, Abe said on 22 February: ‘We simply cannot tolerate any challenge [against the Senkakus] now, and in the future. No nation should make any miscalculation about the firmness of our resolve. No one should ever doubt the robustness of the Japan-U.S. Alliance’.
At the same time, Abe continued: ‘I have absolutely no intention to climb up the escalation ladder … For me, Japan’s relations with China stand out, as among the most important. I have never ceased to pursue what I called [a] “Mutually Beneficial Relationship Based on Common Strategic Interests” with China. The doors are always open on my side for the Chinese leaders’.
The dilemma of a US alliance-first strategy, however, is that Abe’s stance will make it harder for the Chinese leadership to open these doors. This is because the US military presence, along with the US–Japan alliance, is the biggest obstacle to the Chinese dream of restoring its greatness — and by extension an Asian order with China at the centre. It appears that the Senkaku/Diaoyu dispute has now become a symbolic issue for Chinese nationalists and for China’s strategic calculations.
Practically speaking, trying to change this outlook is an impossible task, which will simply make Chinese nationalism much harder to handle. Rather, the rest of the Asian region, including Japan, should improve its own cooperation as a way to provide an alternative regional order that is not heavily China-centric — but whose ultimate goal is to co-exist with a strong China. In short, this longer-term strategic approach should be regarded as a survival strategy, not as a strategy focused on China outright. The nations of Asia are facing a common historic challenge presented by the rise of China and must find a way to exist within this system.
Abe said in his speech in Washington that ‘In order for us, Japan and the United States, to jointly provide the region and the world with more rule of law, more democracy, more security and less poverty, Japan must stay strong’. Equally important is a strategic perspective that gives weight to the role of Japan in building partnerships among Asian countries, which should not necessarily be limited to ‘like-minded democracies throughout the region’ as Abe emphasised. It should be obvious that Abe’s well-known agenda on historical issues is nothing but an unnecessary obstacle to building this alternative strategic vision for Japan and the region.
Yoshihide Soeya is Professor of Political Science and International Relations at the Faculty of Law, Keio University, and Director of that University’s Institute of East Asian Studies.