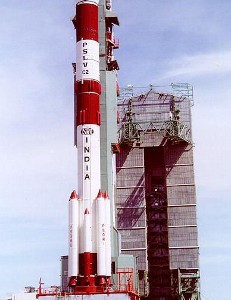 Space race picks up even as economy flags

At a time when many space-faring nations are whittling their budgetary allocations, India's mounting space ambitions are attracting global attention, fuelling reports that the country is locked in a space war with its archrival China, a charge New Delhi denies.

Certainly, the Indian space program is growing faster than ever. This is a far cry from the 1960s when Indian scientists, some NASA-trained, crafted the country's first rocket from a remote village. Today, India's home-grown space program is considered one of the top six in the world although it has come under fire from social activists who question whether the country can or should afford a space race at a time when social needs are growing and the budget is increasingly stretched.

Nonetheless, the growth is reflected in the assignments India's premier space agency, the Indian Space Research Organization, has been taking on. For instance, in this year alone, the organization has already launched a satellite, has on the anvil a proposed mission to Mars and 10 other space missions lined up after receiving a significantly enhanced budget of US$1.3 billion.

India's Polar rocket PSLV, launched last month, put into orbit seven satellites including an Indo-French oceanographic spacecraft aimed at studying changes in the environment, completing its 22nd consecutive launch. A Mars Orbiter is scheduled to be launched by the PSLV XL launch vehicle which previously launched the Chandrayaan-1 lunar mission. It will embark on a nine-month voyage to orbit the Red Planet. Apart from upgrading India's technological capabilities, scientists say, the mission will also bolster the case for participation in joint ventures to outer space.

Apart from the above missions, ISRO has other important assignments like Chandrayaan-2 and the Human Space Flight Program. Overall, during the 12th five-year-plan (2012-2017), ISRO plans to launch 58 missions (25 launch vehicles and 33 satellites).

Part of the reason for such frenzied space activity, say industry watchers, is that there's a strong belief in the Indian scientific community that these endeavors will enhance New Delhi's clout at the geopolitical high table by helping the country catch up in the global space race and join the league of major space-faring nations.

An ISRO scientist told Asia Sentinel anonymously that an augmented budget allocation for space activities is a positive sign. "It also shows that the government is supporting space activities which can assist in a range of nation-building endeavors and also significantly enhance the country's global image," he said.

The ISRO's hopes are buoyed further by the fact that the organization is today one of the world's top six space programs since its inauguration in 1969. While its first 50 missions took 27 years, the next 50 took place in the last 10 and the next 58 missions will happen within a concentrated span of five years. Analysts point out that though the ISRO's budget is less than one-tenth of NASA's, it has been bumped up every year since the early 2000s, jumping from US$591 million in 2004 to 2005, to $1.3 billion in 2013.

"I can think of no other major space program in the world that has enjoyed such a level of sustained annual budgetary growth," Asif Siddiqi, an associate professor of history at Fordham University, who is working on a book on the Indian space program told Space Quarterly magazine. The budget expansion parallels India's economic growth in the past decade, Siddiqi said, adding that high-profile successes have also helped boost government support for ISRO.

Some space industry analysts believe China and India are building and enhancing their military and quasi-military space assets. India has been working on a set of so-called GPS augmentation satellites that would give the country the capacity to adapt and tailor GPS signals to its own specialized requirements and also maintain a comprehensive array of these satellites. In the last year India has increased it annual space budget by 38 percent for both civilian and military programs to keep pace with China.

China too, has been pushing ahead with a comprehensive program aimed at building up its space assets. The Chinese are building their own global satellite navigation system, called Beidou to shore up communications and intelligence gathering satellites.

"There is definitely a space race between India and China for top regional prestige and influence," said James Clay Moltz, a professor in the US Naval Postgraduate School's Dept. of National Security Affairs in Monterey, Calif. "Evidence shows the two countries' are watching each other's activities in space very carefully and keeping score as to who is gaining and losing influence," Moltz told Space Age Quarterly.

ISRO chief K. Radhakrishnan, however, disagrees. He said recently, "We never raced with anybody. In space, science drives technological development and that will subsequently result in developing an application."

Observers also point to a fundamental shift in India's space mission in recent years from its original "developmental" agenda to pursue more commercial and exploratory interests. The government has consistently increased budgets, accelerating the pace of missions and moved towards more capital-intensive - and sometimes "controversial" - projects.

"On the one hand, we have one space mission after another, and on the other we have sclerotic GDP growth which has hit a decadal low and a ballooning fiscal and current account deficit that are threatening to push India's economy to junk status," says Delhi-based developmental economist Vivek Bhambri. "This reflects skewed priorities and muddled thinking on the ruling political dispensation's part."

India's space ambitions have been also met with a mixed response from the domestic population. The mission to Mars - a US$90-million venture -- for instance, has elicited criticism for its high costs in the midst of an economic downturn. However, space analysts say expense on the Mars mission is no more than the price of a Boeing aircraft and well within the emerging economy's reach.

The pro-space lobby also argues that constantly drawing parallels with China's space program reflects a blinkered view. A growing economy like India, they say, needs space technology to further its growth prospects. And it is thanks to a good space program that India has been able to craft one of the largest communication satellite systems - used to support telemedicine and tele-education programs for rural areas - and one of the world's best remote sensing systems, which helps with forecasting the weather and monitoring natural resources, including locating water sources. All this is information is vital for a monsoon-dependent agrarian economy like India's, they point out.

"India's space program is not dictated by what our neighbors are doing," said Dr Jitender Javadekar, formerly with the state-run Council of Scientific and Industrial Research. "We have our own set of priorities which we need to pursue to advance in various spheres as a nation of 1.2 billion. Those who accuse us of being in competition with our neighbors, don't know what they're talking about."

ISRO's Radhakrishnan has also emphasized that of this year's budget, 55 percent was allocated to space applications like communication, navigation, and remote sensing, 36 percent to launch vehicles and just 9 percent to science and exploration missions including Chandrayan 2 and the Mars orbiter.

Defense analysts also point to the fact that it is unfair to single out China and India for their so-called space 'rivalry' as this phenomenon applies to the entire Asian continent. Many nations are locked in competition, for instance, Japan and China, South Korea and Japan and North Korea and South Korea. Asia Sentinel