Hacking a Path Between China's California and Myanmar's Dracula 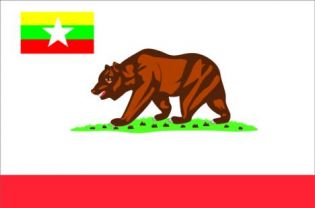 "The primary reason Myanmar ended its half-century military junta is ...because Myanmar leaders want to blunt China’s influence in their country."

Reading the news that the Chinese army systematically hacked into United States computer networks brought to mind another group of soldiers who engaged in an entirely different kind of hacking in Myanmar seven decades ago: Merrill’s Marauders. What makes them most memorable is that it was one of the few times that American and Chinese soldiers fought on the same side against a common enemy.

Seventy years ago, the Second World War raged on both fronts. Japan, which had invaded China a decade before attacking Pearl Harbor, was engaged in fierce fighting with both Chinese and Allied troops. Eager to keep China in the fight, Franklin Roosevelt and Winston Churchill formed a deep penetration unit to engage Japanese forces — while supplying the Chinese army — through China’s backdoor, in Myanmar, then known as Burma.

The 3,000 soldiers who volunteered were named for their commander, Brig. Gen. Frank Merrill. Merrill’s Marauders would go on to hack two passable supply lanes across 1,800 kilometers of dense hillsides and jungle terrain. The so-called “Burma Road” is still there, along with stories of how outmanned American and Chinese troops fought shoulder-to-shoulder in a bloody and ultimately triumphant three-month campaign to capture the region’s only airfield from Japanese troops. (Interestingly, the Allied force that ultimately took Burma back from Japan included the grandfather of future US President Barack Obama).

In a twist of history, China will soon hack its own “path” across Myanmar not far from the Burma Road: a gas pipeline that extends nearly 800 kilometers from the Indian Ocean across Myanmar to Southwest China. Scheduled to be accompanied by an oil pipeline that runs parallel to it later this year — and eventually, a high-speed rail line and network of highways to carry Chinese exports — the pipeline will enable China to gain something it has never had: a western seaboard. As Thant Myint-U, a historian and adviser to the
Myanmar government, says, the pipeline helps give China what it lacks: “Its own California, another coast that will provide its remote interior provinces with an outlet to the sea.”

But while Westerners debate whether Myanmar’s rebranding as China’s California will mean that the US stands no chance to compete here, there is one fact that needs to be understood: the primary reason Myanmar ended its half-century military junta, released political prisoners, held an election and has begun to open its economy to foreigners is because Myanmar leaders want to blunt China’s influence in their country.

“Nobody here wants China to own us,” a high-profile businessman tells me, “China is corrupt and rotten to the core.” Adds another businessman active in the local chamber, “The government told me they don’t want Chinese products and have been ordered not to purchase any more Chinese products. It shows that the government is starting to feel that they have been cheated by the Chinese.”

Apprehension about China has long run deep here. Schools teach about Tayok-pyay-mink — a medieval king who abandoned his capital for fear of a Chinese invasion — as well as brave warriors who defended Myanmar from Mongol invaders in the 13th century and Manchu invaders in the 18th century. While Mandalay itself is virtually a Chinese city now — about a third of the population — it brings an anxiety on the streets. It’s not dislike of China, but rather, as Thant says, “A sense of the dangers of being next to an increasingly powerful and populous nation whose internal wars and politics have spilled over to wreak havoc.”

Changes in China led to an improved relationship in the mid-1980s. When Western nations dealt themselves out of Myanmar with economic sanctions in the wake of crackdowns against peaceful protesters in 1988, China pounced — offering more economic help and bigger arms sales. For the two decades that followed, China had unfettered access to Myanmar, exploiting the country’s rich natural resources — including millions of tons of timber, “the bulk of which has been logged and traded illegally,” as the Environmental
Investigation Agency reported last year.

Myanmar turned first to India to balance the influence of China and then to other members of the Association of Southeast Asian Nations. None provided what a Western observer calls “the alternative trading partner we would love to have.” As America re-engages, there is a completely different spirit here: much more freedom of speech and freedom of the press. With so many people pouring into the country, restaurants are full, traffic jams abound and it’s difficult to find a hotel room.

There is also a sound being heard in the streets not heard in decades — Burmese protests against Chinese investors. As journalist Lucy Ash writes, “Burma’s steps towards democracy have made it possible ... for people to protest things they don’t like — and Chinese businesses have turned out to be at the top of the list.” At one demonstration outside the Chinese embassy in Yangon recently, a banner read, “This Is Our Country — Dracula China Get Out!”

The first significant public act that signaled to the West a new day was suspension in September 2011 of a $3.6 billion Chinese-funded dam at the headwaters of the Irrawaddy River, 90 percent of whose power was slated for China, even though only one in five Myanmar households has power.

As an encore, the government suspended operations at the Monywa copper mine, the largest in the country, a joint venture between China’s Wanabao Company and the deeply loathed business arm of the Myanmar army. While Wanabao reportedly loses $2 million a day, Myanmar’s government is investigating charges that the venture is ruining drinking water while unlawfully seizing local land. As proof that democracy has a ways to go, more than 100 local protesters — led by two farmers’ daughters, dubbed “The Iron Ladies” — were recently attacked by police, with many suffering burns from the use of an incendiary device.

Whatever is decided, China still enjoys an envious position as Myanmar’s largest trade and investment partner. Two-way trade grew by nearly 50 percent in 2012. But if China hopes to maintain its economic lead, it will have to embrace much greater corporate responsibility, especially on environmental issues.

While America slowly lifts sanctions, the opportunity to engage on issues that Beijing has no competency in is vast — from civil society and rule of law, to university-to-university partnership, to vocational training for the vast majority of Burmese who will never go to college. The challenge of overcoming a half-century head start will be daunting. But as Merrill’s Marauders once proved, Americans are skilled at creating new openings where none existed before — even if it means threading the needle between China’s California and Myanmar’s Dracula.

Stanley Weiss is founding chairman of Business Executives for National Security (a non-partisan organization of senior executives who contribute their expertise in the best practices of business to strengthening national security). This article is a personal comment.