Time for China and Japan to Cool It 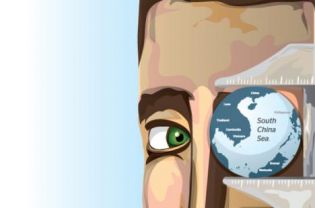 Patrols crowding around the Senkaku/Diaoyu Islands could trigger accidental war

Prime Minister Shinzo Abe's Feb. 22 meeting with President Barack Obama reportedly focused on issues related to North Korea, Japanese-Chinese relations and Japan's joining the Trans-Pacific Partnership. The two leaders almost certainly discussed the dangerous confrontation between Japan and China over the Senkaku/Diaoyu Islands, administered by Japan but claimed by Japan, China and Taiwan. The seemingly inconsequential islands have become dynamite in Asia Pacific relations, and dangerous and escalating rhetoric and exchanges could lead to detonation. A path toward de-escalation is needed.

Fire-control radars provide signals to guide missiles and gunfire to targets, and lock-on is the last step before a decision to shoot. Most military ships and aircraft sound warnings when fire-control radar locks in on them so that operators can take evasive action - or shoot first.

The dispute heated up in August, when Chinese and then Japanese activists briefly landed on the islands and, in September, when the Japanese government purchased three of the five small islands from a private Japanese owner. The move was designed to preempt their planned purchase by the ultranationalist governor of Tokyo - who, the government feared, would aggravate relations with China.

But China responded with diplomatic denunciations and cancellation of high-level meetings and celebrations scheduled to mark the 40th anniversary of normalization. It also stepped up deployments of paramilitary ships into waters around the islands, backed by naval forces operating farther away. Beijing appears determined to challenge Japan's administrative control over the islands.

The two sides have taken several steps up the escalation ladder, including the release of dueling government reports making the case for each side's "indisputable" sovereignty as well repeated Chinese infringements of Japanese-administered waters and air space, discussions in Tokyo about firing warning shots against intruding Chinese aircraft and plans to increase Japanese Coast Guard presence in response to the deployment of Chinese ships. Some Chinese scholars and retired army officers even talk about conditions under which China should start a war with Japan over the islands.

In both Beijing and Tokyo, new leaders are challenged to protect and advance respective national interests in an increasingly strident environment, fueled by nationalist passions.

Each step and counter step in reaffirming their claims increases risk of an accident or miscalculation leading to conflict. This situation is not in the interest of China, Japan, the United States or the broader Asia-Pacific region. A breakdown in China-Japan relations would inevitably disrupt the supply-chain network that links all of East Asia and deal a serious blow to the regional economy.

The debate over ownership of the islands goes back centuries. But contemporary pleadings often reference the 1894-95 Treaty of Shimonoseki, which ended the Sino-Japanese war, during which Japan incorporated the islands; the 1945 Potsdam Declaration; negotiations of the 1951 San Francisco Peace Treaty in which the concept of Japan's "residual sovereignty" over the islands found its way into the lexicon of diplomacy; and finally the 1971 Okinawa Reversion Treaty, which returned US administrative control over the islands to Japan. Analyzing the respective claims and counterclaims advanced by Beijing and Tokyo matters little in terms of ameliorating current tensions.

The sovereignty dispute cannot be resolved in this heavily charged atmosphere, especially given the complication of Taiwan's competing claim over the islands. The immediate policy challenge is to minimize risks of accidents and miscalculation in a narrowly circumscribed geographic area.

Assuming both China and Japan share an interest in avoiding conflict, we offer the following prescriptions, some easier to implement than others. All require restraint and mutual accommodation.

Mutual reduction of patrols: Both nations should begin by decreasing the frequency of patrols, limiting them to white-hulled, non-military ships. Both sides should ultimately commit to restrain landings of activists - as both governments have attempted to do - and refrain from any construction on the islands. On the Chinese side, restraint also entails not sending State Oceanic Administration airplanes into the area. Japan does not have Coast Guard aircraft that can intercept these Chinese planes; its only response is to use military aircraft from Okinawa, as happened in December. Air patrols increase the chance of lives being lost in an accident.

Open talks to implement the 2011 China-Japan agreement to establish a maritime crisis management mechanism: Working out the details will take time, but the fact that both governments recognize the need for such a mechanism could restore calm and rebuild confidence. China has military hotlines with Russia, South Korea and the United States to manage potential escalation risks. Tokyo has repeatedly asked for such hotline in high-level political and diplomatic talks, only to be met with a Chinese response that the time is not appropriate. If not now, when?

Mutual agreement on a public diplomacy ceasefire: Both Tokyo and Beijing have made their respective positions abundantly clear, with formal government reports outlining their positions as well as press conferences and exchanges of diplomatic talking points. The two sides are now talking past each other, instead addressing their respective domestic audiences and pleading their respective cases to international actors appalled at the prospect of China and Japan risking military conflict over tiny rocks. Repetition only serves to inflame domestic opinion and strengthen the other side's resolve. A ceasefire in public exchanges could calm tensions and give quiet diplomacy a chance.

There is very little that the US or the international community can do. The Abe-Obama Summit reaffirmed existing US and Japanese policy positions on the Senkakus. The unstated bottom line, given the stakes involved for the world's three largest economies, is a call for actions that support peaceful management of the region.

The key question, of course, is, "Who goes first?" Reaching an accommodation is the province of diplomats working on behalf of strong and committed political leaders. Although Chinese Party Secretary Xi Jinping and Japanese Prime Minister Abe have taken assertive positions, both also appear to understand the larger stakes involved in the bilateral relationship. Both may be looking for a way to move beyond exchanges of well-worn talking points. Initial actions to de-escalate the dispute need not be publicly announced, but must be reciprocated.

Perhaps the best that can be hoped for is a new stability, where both sides limit the frequency, size and duration of patrols to reinforce their claims and employ only paramilitary forces in a predictable and non-provocative manner. Each side has its own understanding of the status quo; neither will acknowledge change based on the other's air and naval patrols.

Once political traction has been reestablished, it may be possible to deal with the islands in a manner that befits their actual insignificance. For now, de-escalation is the better part of valor and of national interest. Farther down the road, creative political solutions may become possible. Imagine a future summit in which Chinese and Japanese political leaders simultaneously divest sovereignty and establish the islands as an International Nature and Wildlife Preserve.

(James Przystup is a senior research fellow and Phillip Saunders is director of the Center for the Study of Chinese Military Affairs in the National Defense University's Institute for National Strategic Studies. The views expressed are those of the authors and do not necessarily reflect the policies of the National Defense University, the Department of Defense or the United States Government. Reprinted with permission from the Yale Center for the Study of Globalization.)