What the Malaysians Know 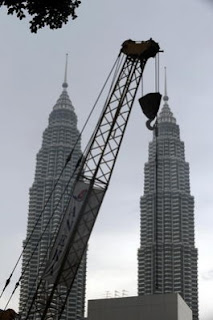 Via TPM, Buzzfeed has a story about how a bunch of conservative pundits, especially but not only Josh Trevino, acted as paid agents of the Malaysian government in a covert propaganda campaign:
A range of mainstream American publications printed paid propaganda for the government of Malaysia, much of it focused on the campaign against a pro-democracy figure there.
According to Trevino’s belated federal filing, the interests paying Trevino were in fact the government of Malaysia, “its ruling party, or interests closely aligned with either.” The Malaysian government has been accused of multiple human rights abuses and restricting the press and personal freedoms. Anwar, the opposition leader, has faced prosecution for sodomy, a prosecution widely denounced in the West, which Trevino defended as more “nuanced” than American observers realized. The government for which Trevino worked also attacked Anwar for saying positive things about Israel; Trevino has argued that Anwar is not the pro-democracy figure he appears.
Pretty amazing stuff. But none of the reports I’ve seen brings up a blast from 2005 we should surely remember: Think Tank’s Ideas Shifted As Malaysian Ties Grew:
For years, the Heritage Foundation sharply criticized the autocratic rule of former Malaysian prime minister Mahathir Mohamad, denouncing his anti-Semitism, his jailing of political opponents and his “anti-free market currency controls.”
Then, late in the summer of 2001, the conservative nonprofit Washington think tank began to change its assessment …
Heritage’s new, pro-Malaysian outlook emerged at the same time a Hong Kong consulting firm co-founded by Edwin J. Feulner, Heritage’s president, began representing Malaysian business interests. The for-profit firm, called Belle Haven Consultants, retains Feulner’s wife, Linda Feulner, as a “senior adviser.” And Belle Haven’s chief operating officer, Ken Sheffer, is the former head of Heritage’s Asia office and is still on Heritage’s payroll as a $75,000-a-year consultant.
Hmmm.
It seems that some years ago Malaysia’s ruling party took a good look at leading pundits and policy intellectuals in the conservative movement, reached a judgment about their personal and intellectual integrity or lack thereof, and acted in accordance with that judgment.
Funny how Malaysia gets who these people are and what motivates them — while our own press corps doesn’t. Paul Krugman, The New York Times