The rise of Maoists in Nepali politics: from ‘people’s war’ to democratic politics 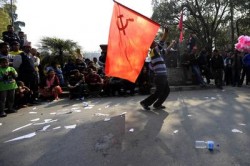 Since its formation in 1994, the United Communist Party of Nepal (Maoists) has gone through a number of radical transformations, shifting from a guerrilla warfare unit to a key democratising force within Nepali politics
The party’s early history is defined by its role in launching the ‘people’s war’ of 1996, a decade-long civil war that resulted in the loss of some 16 000 lives and halted the country’s economic development. The Maoists’ original aim was to benefit the poor and marginalised sectors of Nepali society by uprooting the monarchy and feudalism.
Today, many people question the necessity of the war. But the conflict did succeed in providing marginalised populations — particularly dalits (the so-called untouchables), women, the landless and ethnic and indigenous people — with a wider political space to articulate their grievances. The result was a series of protests and rights movements across the country by the Madhesi (people from the Tarai lowland) and ethnic populations. Such incidents have in turn facilitated the democratisation of Nepali politics. In the first Constituent Assembly election of April 2008, minorities gained substantial representation for the first time in Nepali history, with dalits receiving over 8.17 per cent of seats, women 33.22 per cent, ethnic and indigenous people 33.39 per cent, and Madhesis 34.09 per cent.
The Maoists have also achieved two other key victories. Following their entrance into peaceful politics in 2006, the Maoists gained the largest number of votes in the April 2008 Constituent Assembly election, winning 220 out of 575 elected seats. But their biggest achievement so far has been the overthrow of the monarchy in 2008. Many analysts maintain that the Maoist-initiated war sped up this outcome by at least a few decades.
Yet the Maoists have failed to make progress on other key matters. Despite the impressive political developments, the Constituent Assembly failed to produce the new constitution it was originally tasked with writing, and its dissolution has left the country in a political and constitutional deadlock.
However, the prospects for a new constitution remain high for a number of reasons. First, the major political parties have recently agreed to form an election government led by the chief justice of the Supreme Court. This government is expected to hold a free and fair election by June this year for a new constituent assembly. Second, pressure from civil society for a new constitution continues to increase. Finally, the international community — mainly the US, the European Union, India and China — is advising the major political parties to take action. The key challenge from here on will be to achieve consensus on disputed issues, such as models of federalism and governance mechanisms.
Another daunting challenge for the Maoists relates to Nepal’s stagnant economy. While many Asian countries including China, India and Vietnam are experiencing unprecedented economic growth, Nepal is still one of the least developed countries in the world with a per capita GDP of US$ 624 and unemployment rate of 46 per cent. Recognition of this harsh reality is probably behind the Maoists’ recent plan for an economic revolution in the country, which they announced at the 7th Party Congress. This is a big shift for a once guerrilla-based party.
Yet there is continuing uncertainty over whether they can accomplish this mammoth task. This is partly because some of the party’s cadres are still seeking to resolve disputes with violence. The party underwent a split after a protracted intra-party dispute into two factions, between a large ‘establishment’ group supporting multi-party democratic politics, and a small ’dissident’ group embracing radical politics using violence in pursuit of a ‘people’s democracy’. This split will certainly diminish their voter base for the next election. The Maoists have also failed to address the peoples’ growing aspiration for change despite having occupied the premiership position twice. This perceived failure, albeit attributed partly to the workings of coalition governments, has triggered widespread fear among the public that the Maoists will become yet another Nepali political party that reneges on its commitments for change.
Since the end of the civil war, the Maoists have gradually shifted their ideology toward one that embraces democratic values and norms. This development, coupled with the growing watchdog function of civil society, signals sound prospects for democracy in Nepal. The future course of democratisation in Nepal is unclear. But it is evident that the Maoist party’s future successes will be measured against its promise to uplift the lives of the poor and transform the Nepali economy.
Ramesh Sunam is a PhD candidate at the Crawford School of Public Policy, Australian National University.
Keshab Goutam is a PhD candidate at the Fenner School of Environment, Australian National University.