With North Korea Looking Increasingly Fragile, We Ought to Prepare for When It Falls 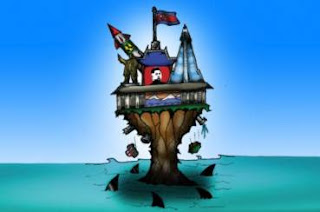 The one thing everyone knows about North Korea is that we know very little about North Korea, except that it is miserable, totalitarian, nuclear and erratic. It is the hermit kingdom, the dark side of the moon.

But thanks to many thousands of refugees who have reached freedom by way of a long underground railroad through China, we know a lot more now about the grim reality. We understand better how the government sustains its dreadful power, and where that power could be faltering. Among people who follow the country closely, there is fresh discussion of whether this most durable of monster-states could be nearing its end days, and what we should do about it.

In recent weeks the news spotlight has focused on the 29-year-old novice tyrant Kim Jong Un, performing his family’s time-tested repertoire of bellicose bluster. Like a lunatic waving an assault rifle as he dances on a high window ledge, Kim galvanizes our attention.

But the more interesting story is down below.

I’ve just read Blaine Harden’s “Escape from Camp 14,” the harrowing story of a young man’s flight from one of the slave labor camps where as many as 200,000 political unreliables — a category that includes not just those who run afoul of authority but their relatives for three generations — are sent to be starved, tortured and ultimately worked to death. The political camps are just part of a larger network of detention sites designed to crush any spark of free will. Harden’s story of Shin Dong Hyuk differs from the best previous refugee narratives — “The Aquariums of Pyongyang” by Kang Chol Hwan, Barbara Demick’s “Nothing to Envy” — because Shin was in every sense a product of Camp 14. Born in captivity to a pair of inmates picked by camp commanders for a loveless bit of procreation, Shin grew up with no awareness of anything beyond the electrified fences. He is like the boy-narrator of Emma Donoghue’s novel “Room,” whose entire world is the backyard shed where he and his kidnapped mother are held captive.

Harden’s book, besides being a gripping story, unsparingly told, carries a freight of intelligence about this black hole of a country. It explains how the regime has endured longer than any of its bestial prototypes: longer than Hitler, longer than Stalin, longer than Mao, longer than Pol Pot. The tools are enforced isolation, debilitating fear, dehumanizing hunger and utter dependence on the state. By the time he was a teenager, Shin had watched a teacher beat a 6-year-old girl to death for hoarding five kernels of corn; worse, he had betrayed his own mother and brother, and had witnessed their public execution without remorse.

Yet Shin, who is not exactly a master escape artist, manages to evade the state’s controls, and along his stumble to freedom he encounters many others who are defying the system. What strikes you is how the shackles of totalitarianism are being corroded by bribery, barter and black-marketeering, including a thriving cross-border trade with China. It’s still a crushingly oppressive regime, arbitrary and brutal. But more often than you would imagine, need trumps fear.

Harden’s narrative is reinforced by more systematic studies. When David Hawk of the Committee for Human Rights in North Korea researched the first edition of his camp expose “The Hidden Gulag” in 2003, some 3,000 North Koreans had found asylum in the South, including some dozens of former political prisoners. When he returned for the second edition, just published, the pool of refugees was 23,000 and included hundreds who had endured detention.

And yet, Hawk told me, “The numbers who want reform and opening, and the numbers of people outside the state system, are growing.”

Fifteen years ago, when many Korea scholars were predicting that — with the end of life support from the former Soviet Union — the North Korean regime could not survive, Marcus Noland of the Peterson Institute for International Economics wrote a contrarian piece in Foreign Affairs explaining “Why North Korea Will Muddle Through.” He was right at the time, so he is worth listening to when he says that these days he suspects the regime is as fragile as it has ever been. Many of the most watchful experts agree. The obvious reason for doubt about the regime’s stability is the new leader, who seems even less qualified than his father and grandfather to manage his threadbare police state. His first attempt to prove his manhood by firing off a long-range rocket ended in an emasculating misfire.

Kim Jong-un inherits a system whose legitimacy, such as it ever was, is being rotted away from below. Korea-watchers have an expression to describe what seems to be happening, as a lawless commerce undermines central control. They say “the market is eating the state.”

Along with food, clothing and tools, the border trade has brought the North Korean populace information about the world outside. North Korea has almost no Internet, but smuggled radios, TVs, DVDs and cellphones have become more common, circumventing the propaganda monopoly.

“North Korea has not discussed the Arab Spring,” Noland told me.

“But in the marketplaces, people were talking about Egypt.”

Don’t expect a popular uprising of that kind in North Korea. There is no Twitter-equipped youth brigade, no Muslim Brotherhood. As one Korea hand told me, “People surviving on 800 calories a day literally don’t have the energy to confront the regime.” The more likely scenarios involve some kind of collapse, sparked by Borgia-style infighting, an army coup or a military exchange with one of the neighbors.

If the regime is truly tottering, we may have been focused on the wrong questions about North Korea.

The engagement camp asks: How can we lure them back to the table so that we can persuade them to disarm? I’m all for diplomacy, and would be overjoyed by a verifiable peace deal. But the North Korean leaders have established to all but the most wishful thinkers that they have no intention of shedding their weapons programs, and that they cannot be trusted to keep a bargain.

The regime-change camp asks: Where can we squeeze to hasten the collapse? We can tighten sanctions aimed at the elite and amplify the honest information we broadcast to the populace. But there’s no strangling the Kim regime without the help of China; and China has legitimate fears that a bursting North Korea would spill over its borders.

The big question we should be asking is: What about the Day After? If the regime’s days are numbered, the end is likely to be messier than anything we’ve seen in the Arab Spring. Why aren’t we sitting down with the Chinese, South Koreans, Japanese and Russians and making a plan to prevent nuclear material from being sold to the Russian mafia or the Chinese triads; to keep some panicky general from incinerating Seoul; to dissuade China or Russia from sending in troops to take advantage; to prevent Nuremberg-minded prison commandants from bulldozing the evidence into mass graves; to fend off an even more monumental human calamity than the famine of the mid-1990s? Then, how do we reunify Korea without bankrupting the South? These are the questions we and North Korea’s neighbors should be asking, together and urgently.

Because when North Korea goes, the Day After is likely to last 20 years.
By Bill Keller New York Times columnist.
Posted by Kerry B. Collison at 3:07 PM