ISLAMBAD - Blood for money for blood 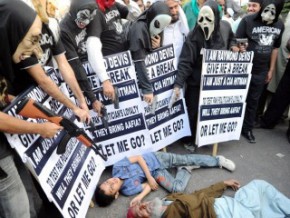 CAN monetary compensation buy justice? The trail of “blood money” paid in Pakistan last year, to wash away the killings carried out by CIA agent Raymond Davis, would suggest that only more misery follows. This week, the widow of one of Mr Davis’s victims was killed at home, allegedly by her own father, who also murdered his wife.

In January 2011 Mr Davis, working under cover for the CIA, had gunned down two men who were riding a motorbike on a busy road in the middle of Lahore, the country’s second-biggest city. The event threw America’s relations with Pakistan into a tailspin from which they have never recovered. The killing of Osama bin Laden, a year ago, overshadowed the Davis case in the foreign press, but it was not forgotten among ordinary Pakistanis.

Apparently Mr Davis had thought the two men, who were reportedly armed, were about to attack him. A former soldier with America’s special forces, who was secretly tasked to the security detail for a group of CIA agents tracking a Pakistani jihadi group, Mr Davis was seen to shoot the first of two the men through his own car’s windscreen. He turned his Glock pistol to the other man and shot him in the back as he was trying to flee.

It remains unclear to this day whether the men, Faizan Haider and Mohammad Faheem, were simple street robbers, or Pakistani intelligence agents or members of an extremist group. Nor is it apparent whether Mr Davis was a trigger-happy Rambo, or if the two men posed a genuine threat to his life. (A third man, a bystander, was killed when a speeding U.S. diplomatic vehicle coming to the aid of Mr Davis ran him down. His family seem to have got no compensation at all.)
A month after the incident Mr Faheem’s widow, Shumaila, poisoned herself. In hospital before she died, she said “I do not expect any justice from this government.” What she wanted was “blood for blood…The way my husband was shot, his killer should be shot in the same fashion”.

In the event Mr Davis was jailed by the Pakistani authorities. There followed a furious row between officials in Islamabad and Washington, where his superiors insisted that their man had diplomatic immunity. Public opinion in Pakistan was outraged, with mullahs and other nationalist rabble-rousers coming out on to the streets. Imran Khan, a cricketer-turned-politician, threatened that he would lead great masses out to protest if Mr Davis were let go.

Amid the hysteria, a deal was stitched together covertly in March 2011. Suddenly Mr Davis was free of the double-murder charge and on an aeroplane headed home. The families of Messrs Haider and Faheem were handed 200m rupees (US$2.2m) under an Islamic provision in the law which allows for “blood money” to be paid in lieu of punishment for a crime. In official terms the Americans denied paying the money, but no one believed a word of it.

That Mr Davis’s freedom was bought using Islamic law left the fire-breathing mullahs and their supporters with no argument against his release. Caught short, hardly any of their followers turned out on the streets.

With their share of the money, Faizan Haider’s in-laws, who were of very modest means, moved into a big house in one of Lahore’s nicer neighbourhoods. But trouble followed for the newly rich family. It seems that Mr Haider’s widow, Zohra, wanted to get remarried. Her groom was to have been her cousin—the son of her mother’s sister. Her mother, Nabeela, had encouraged the match. But her father, Shahzad Butt, wouldn’t hear of it, reportedly because he did not want more claimants to the family’s share of the loot.

This week, witnesses say, Mr Butt shot his wife Nabeela inside the new family compound and then chased his daughter down the street, killing her in turn. Now he’s on the run.

Meanwhile, over in the United States, 37-year-old Mr Davis is still attracting attention. As if to inspire Schadenfreude in Pakistan, soon after Mr Davis got back to the United States he ended up in an ugly brawl. The punch-up seems to have been over a parking spot outside a bagel shop in a Denver suburb, where he allegedly beat up another hungry driver. This week, Mr Davis pleaded not guilty to assault charges. He faces a trial in September; if convicted, he could face a mandatory sentence of five years in prison.

Pakistanis will be hoping the bagel incident can bring down some punishment on Mr Davis, even when a double-homicide didn’t. Banyan, for The Economist