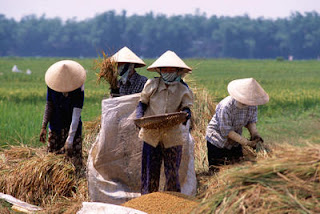 Something that was previously unthinkable has been happening in Vietnam in the last few years: prominent retired Vietnamese officials, national assembly deputies and bloggers are coming together to argue for private land ownership as a remedy for land disputes.

Vietnamese revolutionary leaders legitimised their struggle against the French colonial government by collectivising farmland. Though land reforms in the North had taken place since the 1950s, the state did not formally nationalise land until 1980, with the post-reunification constitution. During constitutional debates at the time, some party leaders argued for the retention of private land ownership to smooth tensions in the South. But socialist orthodoxies prevailed and Vietnam followed the Soviet model of people’s ownership and state management of land.

Land disputes are exacerbated by the highly complex and fragmented land administration system — a legacy of the Soviet model. Occupants are entitled to ‘land use rights’ that range from long-term direction for urban residential land, to 20-year licences for farmland. Another problem is that ‘state management’ (quản lý nhà nước) powers, developed during the command economy, give officials a wide discretion over tenure rights. Despite attempts by the 1993 and 2003 Land Laws to clarify private ‘land use rights’ and circumscribe state discretionary powers, the mentality of ‘state management’ still persists. To this day, state officials retain considerable powers over the compulsory acquisition of farmland, and also over the calculation of compensation payments.

Recent studies by the World Bank show how ‘state management’ powers override community interests and, in some cases, incentivise corruption. The 2003 Land Law gives officials powers to compulsorily acquire land for public purposes, like building highways and hospitals, in much the same way that eminent domain/compulsory acquisition functions in Western land systems. But the 2003 Land Law also allows the Vietnamese state to compulsorily acquire land on behalf of private developers to build industrial parks and projects of ‘national significance’. The exercise of this power has given rise to recent controversy in Vietnam.

A violent land confrontation between farmers and developers in Van Giang, a village east of Hanoi, illustrates this point. On 24 April 2012, the state ordered riot police to take possession of farmland in the area in order to make room for a luxury housing project. According to Huy Duc, writer of the popular Osin blog, most farmers would have no objections to leaving their land if it had resulted in a clear national benefit, such as improving transportation or schools. But they were unsatisfied with arrangements that expected them to sacrifice their land without sharing in the windfall profits made by the private developers.

Due to a combination of factors, such as short-term tenure rights and tightly controlled rights of disposal, the value of farmland remains low. As a result, farmers typically receive inadequately low compensation for the land they give up, and are unable to build a new life in the industrial economy. Compounding their problems, farmers rarely succeed in increasing compensation payments through administrative or judicial review.

The Ministry of Natural Resources and Environment, the central government agency that oversees land management, has advised that land use disputes could be resolved by moving to a long-term leasehold system. The ministry claims that such a system would convey more secure tenure rights to farmers and thus increase market value and compensation payments. And while critics acknowledge that this reform avoids the politically charged issue of private ownership, they argue that a shift to long-term leases will not address underlying problems, especially the ‘state management’ mentality. These critics insist that only private ownership will send a clear ideological message to authorities that the Soviet model is outdated and needs to be replaced by a rights-centred approach.

As land disputes grow ever more complex and violent, calls for private land ownership have gained momentum. For example, a committee reviewing Vietnam’s constitution, which is set for amendment in 2013, recently reported that most provincial governments support some form of private land ownership. Yet the central government is unlikely to replace ‘people’s ownership’ with private ownership in the near future because, in addition to challenging a central socialist ideal, this reform threatens party control over a vital resource.

In the meantime, a small group of social commentators are unconvinced that private ownership will cure all ills, and seek a more nuanced exchange between law and underlying community approaches to land disputes. They point to common sense and community sentiment as key to brokering durable solutions to land disputes and call for more creative hybrids of property rights. These new hybrids would reflect community land values while avoiding the extremes of state and private ownership.