Transnational crime in the Asian Century 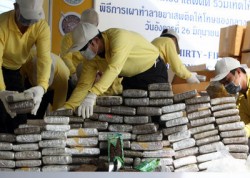 Across the Asian region, crime follows opportunity and is fostered by globalisation, economic growth, conflict and social change.

Australia’s deeper integration into the global and regional economies throughout the Asian Century will expose it to heightened risks of criminal exploitation. Indeed, Australian criminals have long been interested in Asia, and an ethnically diverse Australia has in turn brought about a series of international connections and alliances: Australia’s wealth and its demand for illicit drugs make it an attractive target for both domestic and international crime groups.

That crime inevitably follows opportunity is confirmed by the rapid expansion of organised crime or ‘black societies’ in China. The open-door policies of the 1980s and the ensuing economic benefits were closely followed by a re-emergence of organised crime groups, with the old gangs and triads superseded by new mafia-like groups. Deng Xiaoping’s oft-cited warning that ‘when you open the window flies and mosquitoes come in’ has proved an understatement: China’s opening attracted not only the bad with the good, but a challenge to state legitimacy through the ‘red-black’, or collusion between the communist party and organised crime.

The diversity of criminal groups operating within Asia — including triads, red wa, yakuza, D-Company and West African crime groups — reflects the complexity of this vast region. Still, the nature of criminal activity is broadly similar and is almost invariably grounded in poverty and economic under-development. Moreover, in parts of South Asia, Central Asia, and the borderlands of China and Southeast Asia organised criminal activity often intertwines with terrorist or insurgent groups. In this way organised crime and political extremism become symbiotic sources of illicit wealth and lethal violence.

Transnational cooperation is important because it helps create the necessary climate to bring about a universal jurisdiction for many serious crimes. The UN Convention against Transnational Organized Crime — ratified in September 2003 by 135 states, including all Asian countries except North Korea — was a key development for dealing with organised crime. Yet there remain gaps in the region’s capacity to disrupt, prevent and reduce harms generated by transnational crime. A recent UN global threat assessment of transnational organised crime concluded that the strong demand for illicit products in wealthy countries, alongside a failure to regulate rapidly growing illicit commercial flows of drugs and other commodities, is a serious obstacle to reducing this type of crime.

Multilateral responses to law enforcement and mutual legal assistance are needed to address non-traditional security threats and cross-border crime, including longstanding threats — narcotics trafficking, for instance — and newer forms, such as cyber crime. But a truly pan-Asian structure is yet to emerge, and unattainable goals such as ASEAN’s ‘drug-free’ region by 2015 serve only to undermine the credibility of the multilateral approach.

This is not to deny there has been some progress across ASEAN states: police liaison officers have been appointed to consular posts, 24/7 contacts have been established for senior officers, exchange programs have been developed and systems for sharing criminal intelligence were implemented. But these initiatives are still inconsistently applied across the region as a whole.

Efforts to improve information sharing, joint police operations, mutual legal assistance, institutional capacity building and training are being discussed, but the ‘securitisation’ of transnational crime has made the development of cooperative arrangements in policing more difficult — and limited much action to dialogue.

Transnational crime will be among the many challenges Australia will face in the Asian Century, but it will also be an arena for cooperation and a marker of changes in regional civility. Australian overseas agencies will need to ensure that the literacy and cultural sophistication of its representatives are second to none. Incorporating Asian languages and history into the mainstream Australian education system and continuing to build strong area expertise in universities will be decisive in this respect. Just as China’s First Institute for the Study of Foreign Police offers valuable insights into Australian policing, Australia should work to build up its expertise in comparative crime and policing environments.

A highly useful law enforcement and mutual legal assistance service is in place through the Australian Federal Police’s (AFP) international network of 85 liaison officers stationed in 30 countries, many of them in Asia. This partnership with host police forces aims to support international law enforcement by building capacity and gathering intelligence. The AFP International Liaison Officer Network provides the backbone for effective countermeasures and prevention strategies, but it still needs strengthening at the consular level to provide case assistance and case identification.

Finally, we need to recognise that in the Asian Century we will be living in ‘communities of shared fate’, such that events in the life of an Afghan or Kachin farmer may ultimately affect teenagers in cities like Chongqing or Sydney. The harm of transnational crime can be mitigated through awareness and cooperation, and by ensuring agents are as equally effective in Hanoi as they are in Canberra.