Philippines feels the economic cost of standing up to China 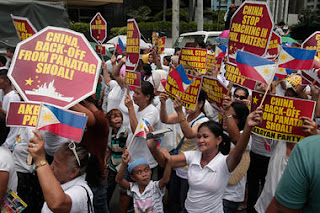 Protesters march towards the Chinese consulate during a rally Friday, May 11, in Manila's financial district of Makati, Philippines. The Philippines and China are in a standoff over Scarborough Shoal which began early April after the Philippine navy accused Chinese boats of illegally fishing in the area.

The South China Sea dispute between China and the Philippines is beginning to take its toll on the Philippine economy, which is heavily dependent on Chinese demand for its exports.

The South China Sea territorial dispute between China and the Philippines is beginning to take a toll on the Philippine economy, which is dependent on a steady Chinese demand for its products.

The two countries have been locked in a tense standoff since April 10, when a Philippine naval ship attempted to arrest Chinese fishermen working off what is known internationally as the Scarborough Shoal. The Philippines claims the territory is within its exclusive economic zone, but China claims sovereignty over it, and Chinese ships blocked the arrest, ordering the Philippine ship to leave.

Beijing calls the cluster of land, which is more than 500 miles from China and about 150 miles from the Philippines, Huangyan Island. Manila calls it Panatag.

China Daily reports that China is the Philippines' third largest trade partner and that the Philippines is China's six largest in the Association of Southeast Asian Nations (ASEAN). The two countries agreed to expand their trade to $60 billion by 2016, up from $30 billion in 2011, making China the biggest export market for the Philippines and leaving the island nation economically vulnerable in this dispute.

In what the Philippines calls an attempt to pressure Manila to give in, China has refused to allow 150 containers of bananas to enter its markets, saying that the bananas are "crawling with insects," The Manila Bulletin reports. Many of the bananas have already been destroyed, costing Filipino exporters $760,000 so far.

The Philippines rejects the claims that the bananas are infested, saying the insect China has cited as the problem attacks coconuts. President Benigno Aquino also invited a Chinese trade delegation to the country to inspect the bananas prior to export.  He said that the Philippines would begin exploring alternative markets for its bananas so that it would not be "tied to just one country, where problems could immediately affect our banana industry," according to the Manila Bulletin.

Zhao Jianglin, an economic expert at the China Academy of Social Sciences' Institute of Asia-Pacific Studies, implied to China Daily that China would use economic measures, such as ratcheting up regulations on bananas, to punish the Philippines for not conceding the Scarborough Shoal. Christian Science Monitor photo Pat Roque/AP