Malaysia: the electoral race gets tighter 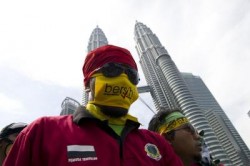 There is growing speculation that the 13th Malaysian general elections will be held in June this year, the prospect of which is raising political temperatures.

But massive demonstrations in Kuala Lumpur on 28 April organised by Bersih, a civil society coalition for clean and fair elections, may have thrown a spoke in the government’s wheels. The demonstrations ended in tear gas and pitched street battles, and some 380 people were arrested. The inevitable finger-pointing that followed between Bersih and the police masks a more important point relating to the popular belief that Malaysia’s election system is rigged in favour of the ruling Barisan Nasional coalition.

Malaysia’s Election Commission has been at pains to announce that it has implemented many of the recommendations of the Parliamentary Select Committee on Electoral Reforms, which conducted a genuine and nationwide consultative process. One recommendation being implemented is the use of indelible ink to prevent voter fraud — a recommendation put forward by Bersih itself. The Election Commission also scrutinised the electoral rolls and found few irregularities, but public distrust in the electoral process is so deep that this result appears to carry little credibility. The accuracy of the electoral poll in Malaysia is indeed a critical matter that must be beyond reproach. There are several swing states where small margins can change the national result significantly.

In the meantime, Prime Minister Najib Razak has embarked on a charm offensive. He fulfilled an earlier promise by repealing the Internal Security Act, which allowed for preventive detention without trial. The government also passed a law that allows students to join political parties (although political events on campuses are still banned).

These actions no doubt will positively impact the prime minister’s popularity, which was already high following a populist budget and a recent report complimenting the government on the implementation of its economic reform package. But while the prime minister enjoys very favourable ratings in the polls, his party, Barisan Nasional, does not. This has given the opposition parties some hope, although they have yet to coalesce and offer a clear vision or alternative policy. The scenes of street protests and tear gas on 28 April, together with allegations of police brutality, will likely help the opposition and hurt the government. This could further narrow the difference between the incumbent Barisan Nasional and the main opposition coalition, Pakatan Rakyat.
All the tea leaves suggest a close race, perhaps closer than the one in 200
8, when the opposition won 5 of 13 state legislatures and over one-third of the seats in parliament, denying the Barisan Nasional a two-thirds majority.