China’s rise and security in the Asian century 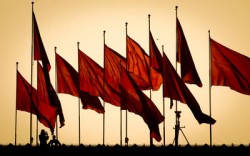 The future of Asian security has caused much anxiety. Not surprisingly, a good deal of it concerns China’s recent geopolitical ‘assertiveness’.

Territorial disputes over the Senkaku/Diaoyu islands, the South China Sea, and Arunachal Pradesh suggest China’s much-vaunted ‘charm offensive’ toward its neighbours is over. So what comes next?

The first scenario likens China with Germany in the late 19th and early 20th centuries and anticipates a spiral of great power competition leading to a major war. Europe’s past becomes Asia’s future.

In the second scenario, China’s ascent can be compared with the US’s in the 19th century, when it pursued regional expansion and imposed a sphere of influence over Latin America and the Caribbean. China might seek similar coercive hegemony over Central, Southeast, and parts of South Asia. The US’s past becomes Asia’s future.

In the third scenario, Asia may return to a tributary system in which China dominates as a benign hegemon, offering trade privileges and occasional security protection to its weaker neighbours. Here, Asia’s own past becomes its future.

The problem with these scenarios is that they ignore significant changes that have taken place in Asia in recent decades. Asian security in the aftermath of World War II was shaped by three forces: economic nationalism, security bilateralism (anchored on the US’s ‘hub-and-spoke’ alliances), and political authoritarianism. Over the decades, Asia has seen a major growth in economic internationalism, multilateral institutions and democratisation.

Since the mid-1950s, intra-Asian trade has nearly doubled to over 50 per cent of the region’s total trade. The effect of economic interdependence and multilateral institutions in promoting peace has been well documented by international relations scholars. In Asia today, production networks straddle national boundaries, making them especially costly to break; multipurpose regional institutions have proliferated; and cooperative institutions now outnumber formal military alliances, thus reversing the Cold War pattern.

Democracies in Asia today outnumber autocracies and, despite fears that democratic transitions might produce aggressively nationalistic regimes, no newly democratic regime in Asia has behaved this way.

The Asian regional order today resembles neither the 19th century Concert of Europe, nor the EU of today. The EU model is implausible in a highly sovereignty-conscious Asia. An Asian concert of powers is unrealistic and dangerous. The two most important pitfalls of this idea are long-known. First, for a concert to function successfully it requires a degree of ideological convergence among the major powers. Such a convergence does not exist pending China’s democratisation. On the other hand, a concert based on current ideological conditions would be a welcome gift to China’s authoritarian rulers, as it would preserve a conservative status quo that would arrest China’s democratisation.

A concert of this type would also necessarily marginalise weaker states. The Concert of Europe, as historian Richard Elrod points out, ensured a degree of self-restraint among the great powers toward each other, but also brought about ‘great power tutelage over the rest of Europe’ before collapsing over ideological divergence. An Asian concert would imply de facto Sino–US joint rule, but will the rest of Asia really want to live under Chinese or US tutelage?

In contrast, Asia’s regional groups like the ASEAN Regional Forum or the East Asian Summit facilitate the peaceful engagement of great powers with each other and with the region, without reducing weaker states to the status of vassals and pawns. The rise of China requires adjustments and strengthening of the current order — not reinventing an outdated model. Asia’s future need not resemble Europe’s past or present. Nor will it resemble past US foreign policy. The revival of a tributary order would be similarly countered by the economic, strategic and cultural influence of the US, Japan, India and Russia.

Moreover, a concert model may not serve Australia’s security interests because it will almost certainly be excluded from it. Asia and Australia are better served by a model based on the kind of ‘entrepreneurial’ and ‘intellectual’ leadership to which Japan, Australia and ASEAN (now South Korea, Indonesia and India) have made a contribution, and which has brought about the simultaneous engagement of China and the US.

For all its recent diplomatic assertiveness, China supports and sustains Asian economic interdependence and institutions, as do the US, Japan and India. At the same time, US alliances and security ties with India offer a hedge against any future uncertainty in Chinese behaviour.
In Asia today there are multiple mechanisms of stability: economic interdependence raises the stakes of mutual survival and well-being; US-centred alliances preserve the balance of power; and cooperative institutions develop a habit of dialogue and thereby moderate extreme, unilateral behaviour. None of these is sufficient by itself to guarantee order, but together they create the conditions for stability.

While great power competition in Asia will not disappear, with statesmanship and some luck, 21st century Asia can avoid the cataclysm of conflict that destroyed the European international order in the early 20th century.

Amitav Acharya is Professor of International Relations at American University, Washington, DC. This article is from East Asia Forum (www.eastasiaforum.org) at the Crawford School, ANU.