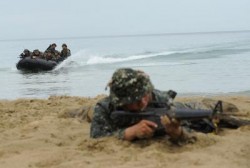 This characterisation emerged around the time of US President Obama’s address to the Australian Parliament in November 2011 and the Pentagon’s release of a policy document, Sustaining US Global Leadership: Priorities for 21st Century Defense, a few months later. This new position — which, as always, is more evolutionary than revolutionary — has two fundamental elements. First, there is a clear admission by the US that its defence posture must be substantially recalibrated in view of its economic circumstances. This trimming of the sails is important. It isn’t too often that Washington officially acknowledges that it no longer has a surfeit of power and can’t be everywhere doing everything. Second, the policy document reaffirmed that the US has vital interests in East Asia and is therefore determined to continue to play a prominent role in shaping the future of the region.

The notion of the pivot reconciled these competing imperatives. Washington sought to make clear that, if necessary, the US would be content to be a Pacific power rather than a global power. This signal was directed unambiguously at China.

The US had, of course, got most of the way to this point a decade earlier. In contrast to  the Clinton administration, which had been prepared, eventually, to characterise China as a strategic partner, the Bush administration reclassed China as a potential strategic competitor, reversed the strategic priorities that had guided the US for 50 years, and identified a new region — the East Asian Littoral — as the focus of US security interests. This region was (deliberately) vaguely defined as extending from south of Japan, through Australia and out into the Bay of Bengal — precisely the area that the Obama administration is now focusing on.

In the mid-1990s the US military leadership began lobbying to end the concentration of US military assets in Japan and South Korea on grounds that the security focus was drifting to the south. Most statesmen, policy advisors and academics had already singled out the US-China nexus as the defining feature of the 21st century. Australia’s leading strategist, Hugh White, has pointed out that these early instincts were right on the money. White contends that, as continuing US pre-eminence is not feasible and Chinese pre-eminence is not attractive, the appropriate policy prescription is to aspire to a concert of powers in the Asia Pacific. This would involve both the US and China agreeing not to indulge their unilateral preference to see the other accept second-tier status. White inclines to the view, I think, that getting the US to step away from pre-eminence might be harder than persuading China not to aspire to it, and he regards developments associated with the ‘pivot’ as indicative of this asymmetry.

The opposite could be the case: China may be just as uninclined as the US to abandon its exceptional claims, if not more so. The political context surrounding the pivot is informative in this regard. In addition to endeavouring, with considerable success, to arrest the precipitous decline of America’s stature under the Bush administration, the Obama administration made a point of asserting America’s interests, obligations and strengths in the western Pacific and East Asia. But no one seemed to be listening.

Meanwhile, China’s trade, investment, foreign-exchange reserves and military expenditure figures were surging at a pace that suggested the future had already arrived. Then, in March 2010, North Korean actions brought the Korean peninsula closer to war than it had been in decades. China not only failed to condemn North Korea’s military provocations, but endeavoured to impose limits on US–Korea initiatives to deter Pyongyang. Around the same time, China became markedly assertive in enforcing its claims in the East China Sea and South China Sea.

Beijing’s responses to these events appear to have galvanised many governments in East Asia into testing whether the US was willing and able to be a long-term player in the region.

The Obama administration responded decisively by reassuring Seoul that the US supported its deterrence strategies. The US also asserted its position in the region at the July 2010 ASEAN Regional Forum, where it declared the outcomes of the disputes in the South China Sea to be a ‘national interest’. This stance received conspicuous support within and beyond ASEAN and was accompanied by efforts to energise US relations with Vietnam and the Philippines.

Such is the context in which the Pacific pivot occurred. While the Pacific pivot is heavy with (intentional) symbolism, its associated initiatives are still modest and cautious, and this is both fortunate and commendable. Beijing has unmatchable potential in the arena of hard power but a very narrow base when it comes to soft power. China may discover that it cannot separate its international persona from its internal governance arrangements. In the 1995 DoD East Asia Strategy Report, Joseph Nye likened security to oxygen — something that one scarcely notices until it is absent — and claimed that America’s deep engagement in East Asia had supplied the oxygen (or security underpinnings) for the region’s economic dynamism. Beijing, in contrast, runs the risk of being seen as a state that associates security with the ability to regulate the supply of oxygen to others.

Something resembling a regional concert of powers is highly desirable, and it is not a wildly improbable outcome, so Hugh White is still on the money. The US and China seem to be heading in this general direction, and will probably continue to do so. But for this regional concert of powers to emerge fully the display of hard power is likely to be necessary on a continuing basis to block the inevitable temptations on both sides to revert to a solo performance. If the US and China are to write a geopolitical future for the Asia Pacific that is entirely different from the past, the conversations between them will have to have unprecedented candour, reveal intentions and ambitions, and erase lingering concerns about hidden agendas. This is a pretty tall order, and it probably isn’t happening yet…