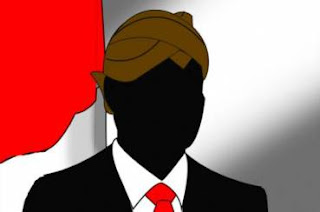 Even if Barack Obama had lived here all his life as an Indonesian citizen, he would not become president unless he was a muslim.'

How would you define democracy in a country where cultural considerations defeat political logic? Political logic has it that because Indonesia is a democracy, anybody proposed by a winning political party or coalition can run for the presidency.

But cultural logic has it that only a Javanese Muslim would suit the position because a non-Javanese candidate would not look good enough in the eyes of the majority of the population.

This assumption has historical precedents.

Five out of six presidents who have ruled this country since 1945 are Javanese, and they stayed much longer in the chair than B.J. Habibie, the only non-Javanese to hold office.

Since the Suharto era, the unwritten requirement for candidacy was that you must be Javanese, a military general, a Muslim and a member of a political party. Only being a military general was dropped from this list in 1998.

If you are not a Muslim, even though you are a capable leader, you can never be Indonesia’s president because 87 percent of the population adheres to Islam. For instance, even if Barack Obama had lived here all his life as an Indonesian citizen, he would not have become president unless he was a Muslim.

Demographically, democracy in Indonesia means the voice of the largest ethnic group — the Javanese. Javanese comprise 67 percent of the population.

Political scientists are now asking whether Indonesia will continue to develop its democracy within the frame of such socio-cultural realities, or whether it will adopt equal opportunity and the merit system.

Given such circumstances, let’s now examine the chances of prominent politicians now maneuvering to contest the 2014 presidential election.

Aburizal Bakrie is from Sumatra, so he needs a Javanese as his running mate. Golkar’s special national leadership meeting in July must appoint a Javanese running mate for Aburizal, otherwise his chances are slim, despite the party’s power. He was once the coordinating minister for people’s welfare and is now chairman of the Golkar Party. He knows how government works

Prabowo Subianto, who leads the Great Indonesia Movement Party (Gerindra), is respected as a Javanese leader. Some have called him “President Prabowo” because he meets all the requirements. But he needs a non-Javanese running mate. He has not occupied a government position, but his experience as chief of the Army’s Strategic Reserve Command is an advantage.

Megawati Sukarnoputri, the fifth Indonesian president, has reportedly indicated she may not run again for the No. 1 position — having failed to be re-elected twice — but she may change her mind. She is the only candidate who has the experience as president.

Jusuf Kalla is popular, but he is not Javanese. During his tenure as vice president (2004-2009), he teamed up with a Javanese president who did not want him to continue for another term, probably because he was perceived by some to be “the real president.”

There are many other candidates, but they lack either strong political vehicles or acceptability as seen from a socio-demographic perspective.

Any search for prospective presidential candidates outside of these few would be a waste of time and energy because despite all the nice words about Indonesia’s democracy, ethnic and religious representation still counts very highly.

Leaders of political parties are also the financiers and final decision-makers who get themselves nominated unchallenged for government positions. Since political parties ban leadership conventions, wealthy people will emerge to grab top political positions, but great national leaders will remain elusive.

Pitan Daslani is a senior political correspondent for BeritaSatu Media Holdings.
Posted by Kerry B. Collison at 5:16 PM