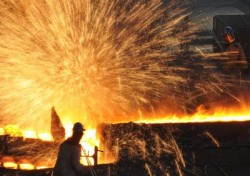 The challenges wrought by burgeoning Asian demand for Australia’s natural resources have already begun to receive policy attention from the Australian federal government.

The Minerals Resource Rent Tax is just one example. But the challenges arising from trade flows are only part of the story that will confront Australian economic policy makers during the Asian Century. Countries are also linked by investment flows, and policy development in this respect is lagging badly.

The investment channel takes on added significance in the case of Australia because of the country’s long-standing reliance on foreign savings to fund domestic investment and consumption and to inject competition into domestic markets. Australian Bureau of Statistics data show that, bar a few quarters, Australia has not recorded a surplus on the current account in the past 50 years. By year end 2011, international investment liabilities exceeded international investment assets by AU$853 billion (US$892 billion). And data from the Reserve Bank of Australia show that 18.1 per cent of the liabilities of Australian banks are owed to non-residents.

What is striking about Australia’s international investment linkages is not their scale, but how dramatically their composition differs from trade linkages. In 2011, merchandise exports to Asia (ASEAN, China, Hong Kong, India, South Korea, Japan and Taiwan) accounted for 76.2 per cent of Australia’s total. Yet in 2010, the latest year for which data are available, these countries were only responsible for 21 per cent of total foreign investment flowing into Australia. If Japan is removed from the calculation, the share drops to a paltry 6.3 per cent.

The Asian share of the stock of foreign investment in Australia is no more impressive, standing at 12.87 per cent, or 6.87 per cent minus Japan. In contrast, the shares of the US and UK stood at 27.94 and 24.02 per cent, respectively. And for all the talk of behemoth Chinese state-owned entities buying up Australian mining and farming assets, the Chinese share of the stock was less than 1 per cent. In 2010, Chinese investment in Australia actually fell to AU$1.65 billion (US$1.72 billion), down from AU$7.82 billion (US$8.18 billion) the year before. The limited scale of Asian investment in Australia is particularly noteworthy given the region includes some of the world’s most prodigious net capital exporters, namely, China and Japan.

Aside from being limited in scale, Asian investment also appears narrowly concentrated in just one industry sector: mining. Comprehensive data showing foreign investment by country as well as industry sector are scarce. One source that provides some indication is the annual report of Australia’s Foreign Investment Review Board, which shows that for all countries between 2007 and 2010, the value of approved investment in the mineral exploration and development sector accounted for 47.34 per cent of the total. With the exception of Singapore, this share was considerably higher for Asian countries. For example, it reached 86.88 per cent in the case of China.

These numbers suggest that managing a two-speed economy is not the only challenge awaiting Australian policy makers: plotting a path to effectively tapping Asian capital markets in order to promote broader-based; higher value-added; and ultimately more sustainable, productive activities will be key.

This job will be facilitated to the extent that countries such as China continue to open up their economies and allow domestic capital to flow abroad more freely. But it would be naïve to assume that Asian interest in Australia’s natural resources will automatically translate into broader investment interests. To be sure, Australia already has a number of basic policy settings right, such as political stability and a strong system of intellectual property rights enforcement. Yet there is evidence that more can be done. According to UNCTAD’s latest World Investment Report, Australia ranked 15th out of nearly 200 countries for its FDI ‘potential’, but only 72nd for performance in attracting FDI. Understanding why there is such a gap, and seeking to bridge it, is vital.

Looking forward, China will undoubtedly become the big player in global investment flows. With a population of 1.4 billion people and an exceptionally high savings rate, China is expected to maintain its rapid income growth. Its capital account continues to open gradually and, as long as its own financial sector remains repressed (for example, real interest rates on savings deposits in China’s banks are currently negative), there will be additional incentives for domestic savers to seek out higher returns overseas.

And yet it is with respect to China that Australian investment policy performance has been most lacking. After the federal government recently banned Huawei Technologies from supplying equipment to the National Broadband Network, and with the near-hysteria surrounding Chinalco’s earlier proposed investment in Rio Tinto, it would be difficult for Chinese companies to view Australia’s attitude to foreign investment as anything other than arbitrary and opaque.

Until such basic policy positions can be clearly articulated and justified, it will be nearly impossible to pursue other worthy endeavours, such as positioning Australia to become an offshore trading centre for the renminbi. The recent Memorandum of Understanding between Australia and China relating to infrastructure projects is a welcome development in this respect, and one hopes that the working group charged with developing it meets with more success than stalled negotiations for an Australia–China FTA.

James Laurenceson is Senior Lecturer at the School of Economics, University of Queensland.
A version of this article was first published on The Conversation. East Asia Forum