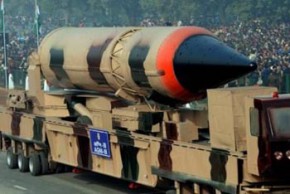 Asian countries are suddenly jostling to launch satellites, train astronauts, and put military hardware into orbit. What are the risks up there when no one’s cooperating?

When North Korea tried and failed to launch a satellite into orbit last month, observers in the West paid attention mostly to the Unha-3 rocket beneath it. If the launch had worked, North Korea would likely have had a ballistic missile powerful enough to reach Alaska with a 1-ton weapon and Seattle and San Francisco with a 500-kilogram bomb (albeit with questionable accuracy).

But the power of the booster wasn’t the whole story: The third stage of the rocket mattered, too. Perched on top was North Korea’s first remote-sensing satellite, and it carried an implicit message for rival South Korea, which has not yet succeeded in launching a satellite of its own: “You may think you’re ahead technologically, but we can beat you into space.”

Amid all the US analysis of the North Korean launch, one point tended to get lost: It was just the most recent entry in Asia’s accelerating space race. China conducted 18 successful space launches last year, passing the United States in annual launches for the first time. India has increased its space budget by 50 percent this year. And Japan has abandoned decades of purely peaceful space activity to allow military missions. Newcomers like Indonesia, Singapore, and Vietnam are joining in as well.

Just as the rest of the world is beginning to cooperate in space, Asian countries are becoming increasingly competitive. In the West, 19 European countries are sharing technology and costs within the framework of the European Space Agency; even the United States and Russia have joined in close cooperation on the International Space Station and share a number of joint commercial ventures.

In Asia, by contrast, space appears to be becoming the latest venue for unsettled historical and geopolitical rivalries. Officials deny they’re in competition, but as Asia’s economies expand, the record suggests that they are using space to demonstrate military power, technological might, and political prestige over their neighbors.

Since 2007, Japan, China, and India have all conducted lunar mapping missions—expensive and redundant efforts that speak more of a desire for prestige and technological independence than of science and efficiency.

The transformation of space into an arena of conflict will have costs if it continues. By ignoring established norms, Asian countries may create dangerous conditions for others in space; they could even stumble into war. The prospect of copycat weapons tests among Asia’s rivals in low-Earth orbit could release large amounts of orbital debris, threatening the International Space Station and other high-value spacecraft in this densely populated region of space. Competing programs, even if only for civil purposes, could also exacerbate political tensions on Earth, making broader cooperation in the space field more difficult and putting current space treaties at risk. Space activity has become increasingly transnational since the end of the Cold War. Asia’s current dynamics threaten to reverse this progress.

IN THE WEST, the term “space race” evokes memories of Sputnik and the Cold War-era rivalry between the United States and the Soviet Union. That’s a useful way to think about what’s happening in Asia—except that the two Cold War superpowers actually talked about space security regularly, engaged in arms control, and agreed not to interfere with each other’s military satellites. These measures provided some stability in space. Asian powers have not even started talks on their space activities.

Though the Asian space powers largely claim to be pursuing scientific goals, many recent missions have involved duplication of effort, suggesting that the deeper purpose of such missions is political. Since 2007, for instance, Japan, China, and India have all conducted lunar mapping missions—expensive and redundant efforts that speak more of a desire for prestige and technological independence than of science and efficiency.

The main impetus for much of the regional space tumult over the past decade is China’s rapid emergence as a military space power. Though China published a 2011 white paper outlining its space plans that is notably silent on military aims, the country has been pressing forward toward a range of military space capabilities, including space weapons. In the most dramatic example (which Chinese officials first denied, then claimed was a threat to no one), China tested an antisatellite technology in 2007 by destroying a weather satellite, creating more than 3,000 large pieces of orbiting debris. It is one-third of the way into deploying a 35-satellite GPS system called Beidou that will help its missile guidance, although it will offer commercial navigation services as well. In the civil field, China is only the third country to have launched its own astronauts; in September 2011, it placed its first space station, Tiangong-1, into orbit. It has conducted an unmanned docking already, and its Shenzhou 9 mission later this year will bring the first Chinese astronauts—or taikonauts—to the station.

With its rapidly growing economy, China can afford a large and increasing investment in all areas of space. While this is unsettling and even worrisome for the United States, it poses an existential threat for China’s neighbors. These countries face increased military risks and the prospect of losing political and economic influence as Beijing attempts to establish regional space hegemony.
India has reacted by establishing a new agency called the Integrated Space Cell, bringing a group of military and civilian officials together to oversee defense programs for space. The government in New Delhi has ordered military satellites for each branch of its armed services and pledged to match China’s capability by deploying a ground-launched antisatellite weapon. Where India had previously concentrated on space applications in the service of its population (communications, telemedicine, and agricultural information), it has recently expanded its program in order to compete with China in high-prestige space science. Projects currently underway include its Chandrayaan-2 lunar lander and rover, a Mars mission, and an expensive, independent human space flight program.

Meanwhile, on China’s eastern side, Japan has felt the pressure to step up its game, or risk losing its current place as Asia’s space technology leader. In the past decade, the Japan Aerospace Exploration Agency has pushed ahead in launching the first mission to return particles from an asteroid, carried out a lunar mapping mission with high-definition imagery, built the Kibo research module for the International Space Station, and developed one of only three spacecraft systems now certified to supply the station.

Most notably, Japan shocked many observers by moving quickly in 2008 following China’s antisatellite test to end its 30-year ban on military space activities. While the military’s main focus is on reconnaissance and early warning, senior Japanese leaders have not ruled out possible development of “defensive” space weapons in the future.
Meanwhile, South Korea has both regionwide and peninsula-focused reasons for enhancing its space activities. It paid Russia to train and fly its first astronaut—the female biotechnologist Yi So-yeon—to the International Space Station in 2008. It has devoted national funding to development of a satellite production industry, a sophisticated space control and data interpretation center, and a space-launch facility at Naro. While it is clearly ahead of North Korea, it has thus far failed in two attempts to launch its own satellites.

In addition, a growing number of other countries are anxious not to fall further behind the region’s leaders. Australia is rapidly expanding its civil space efforts and joining with the United States in supporting new military communications and space situational awareness systems. Vietnam, which has border and maritime disputes with China, is now receiving over $1 billion in Japanese assistance to build a national space complex and to purchase two radar satellites, which may help keep an eye on China.

The wealthy city-state of Singapore has recently begun sending large numbers of scientists, engineers, and military officers abroad for space training and promising big salaries to attract aerospace faculty to its own universities. In 2011, it paid India to put the first domestically produced Singaporean satellite into orbit. The tiny nation seems well poised to develop a niche capability in maritime operations and reconnaissance. And nearby Indonesia has plans to use its favorable equatorial location—the most efficient for reaching geostationary orbital slots—to develop a future commercial launch industry. It is currently investing in building its own space booster.

AS THE UNITED STATES struggles with a declining NASA budget and waning sense of direction for its own space activities, the space race in Asia poses new challenges. Asian countries are currently committed to increased space budgets; while US space leadership is not currently in jeopardy, extended budget cuts could change this assessment. On the military side, the United States is further ahead, but space weapons development among Asia’s rising technology powers adds a new element of risk—not least because debris generated by tests like China’s could hurt other spacecraft.

Cold War space security treaties and conventions, unfortunately, haven’t kept up with the times. New actors and new technologies are beginning to stress general agreements like the 1967 Outer Space Treaty and the 1975 Convention on the Registration of Space Objects. To address these concerns, Europe and the United States recently joined forces to promote an international space code of conduct to encourage responsible behavior, debris mitigation, and increased transparency. Asian governments have been invited to join, but few have yet embraced this effort.

Fortunately, Asia’s competitive future is not set in stone. The Chinese-led Asia-Pacific Space Cooperation Organization and the Japanese-led Asia-Pacific Regional Space Agency Forum each provide training, ground stations, and satellite technology to a select group of Asian nations. But there is no current cooperation between these two bodies.

As with any conflict, the outlines of a possible a solution can sometimes be found in other, similar arenas. In the wake of recent earthquakes and tsunamis across Asia, various nations have begun to explore possible cooperation in disaster prediction and monitoring. Similarly, growing international knowledge about the shared risks posed by orbital debris could bring new self-restraint to the region’s militaries. Finally, future economic setbacks may cause Asian nations to cooperate as a means of sharing costs.

Indeed, if North Korea’s failed launch has any positive outcome, it might be to help Asia’s political leaders begin to realize that an unbridled space competition will cause problems for all of them, as well other countries. The best hope for the United States and Europe—and for the citizens of Asia as well—is that Beijing, New Delhi, Seoul, Tokyo, and Asia’s political leaders will begin to discuss their common interests in space. Only in this way will we begin to develop 21st-century “rules of the road” to prevent the rising mistrust and conflict in orbit from ruining space for future generations.

James Clay Moltz is a professor at the Naval Postgraduate School. He is the author of “Asia’s Space Race” (2012) and “The Politics of Space Security” (2011).The Boston Globe