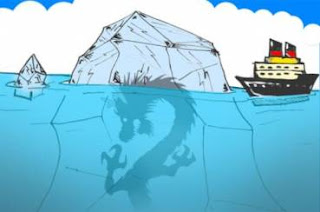 There is no shortage of speculation that China will eventually deploy military forces to port facilities it has constructed in places like Burma, Pakistan and Sri Lanka.
Think of it like an iceberg: The top lies in plain sight, but much more hides beneath the surface.

In its annual appraisal of the Chinese military published on May 18, the US Department of Defense seems to be describing an object it finds both familiar and mysterious.

Here are the five most important questions about Beijing’s defense strategy that remain stubbornly unanswered.

Although China’s official 2012 defense budget is $106 billion, an 11 percent increase over last year and a fourfold increase from a decade ago, the Pentagon places China’s total military spending at somewhere between $120 and $180 billion. “Estimating actual PLA military expenditures is difficult because of poor accounting transparency and China’s still incomplete transition from a command economy,” the report notes, referring to the People’s Liberation Army.

There have been no credible estimates of Beijing’s long-term defense spending plans. On its current trajectory, China could overtake the United States as the world’s biggest military spender in the 2020s or 2030s, but there are too many unknown variables to accurately predict if this will happen.

What is China’s nuclear strategy?

The Pentagon concludes that “China’s nuclear arsenal currently consists of about 50 to 75 silo-based, liquid-fueled and road-mobile, solid-fueled ICBMs.” The Pentagon doesn’t attempt to estimate the total number of nuclear weapons that China possesses, although it’s generally assumed to have a smaller nuclear arsenal than the US cache of more than 5,000 nuclear warheads.

Nonetheless, theories that Beijing possesses or plans to develop a much bigger nuclear weapons stockpile just won’t die down. Speculation last year that China may have as many as 3,500 nuclear warheads — predicated on rumors of a sprawling network of underground tunnels — has been reliably trashed, but some still argue that Beijing sees a strategic opportunity in building a nuclear arsenal that could match or even exceed that of the United States in the coming decades.

China currently has only two Jin-class Type 094 nuclear-powered ballistic missile submarines (SSBNs) in service, the Pentagon tells us, and the missiles designed to arm the subs are not yet operational (though when they are, they will be nuclear-capable). Two submarines aren’t much of a strategic deterrent for an aspiring superpower, but the true scope of the SSBN fleet that China plans to build remains unknown.

What is the Chinese Navy up to?

American analysts often use the term “string of pearls” to describe Beijing’s supposed strategy of establishing a network of foreign naval bases, especially in the Indian Ocean, but the Chinese don’t. The latest Pentagon report does not discuss whether China plans to create a US-style network of permanent forward bases for the PLA Navy.

Nonetheless, there is no shortage of speculation that China will eventually deploy military forces to port facilities it has constructed in places like Burma, Pakistan and Sri Lanka. The Seychelles has invited China to use its ports as resupply points for Chinese ships, but Beijing has insisted that this is not the establishment of a first foreign base, unconvincingly calling it a “resupply port.” The “places or bases” debate has already been running for some years and it will continue to rumble on while Beijing remains tight-lipped about its long-range ambitions.

The Pentagon report also struggles to shed light on China’s future aircraft carrier program, beyond the existence of the single ex-Soviet carrier that is currently undergoing sea trials. “Some components of China’s first indigenously produced carrier may already be under construction,” it suggests, adding that “China likely will build multiple aircraft carriers and associated support ships over the next decade.” That’s guesswork.

What kind of space capabilities is China developing?

China is becoming increasingly proficient in space. The report mentions that China is assembling its own GPS-style satellite network, blasted the Tiangong-1 spacelab into orbit in 2011 and has developed a ground-launched anti-satellite missile to improve its counter-space capabilities. But the Pentagon neglects to mention one of China’s most ambitious space programs: the development of the Shenlong spaceplane and the possible associated development of advanced propulsion systems, whose existence increases the risk of a military space race with the United States.

There are many other imponderables in China’s military. Chinese cyber-espionage has been effective in obtaining foreign military secrets, but it’s unclear how much of this know-how has been successfully and usefully absorbed into China’s own military programs and doctrines. The overhaul of the Chinese defense industry has revolutionized the country’s indigenous capabilities, but how close has China really got to ironing out the kinks in its military-industrial structures and processes?

All of the unknowns feed into one larger question: Is the PLA worth the hype? China’s military is untested; it hasn’t fought a major campaign since a disastrous war with Vietnam in 1979. In the event of conflict, would its performance live up to the nation’s expectations, or would disadvantages like corruption and inexperience critically undermine its war-fighting capability? Is the 21st-century PLA even designed to be used, or does it exist to prop up and counterbalance the Communist Party domestically in a world where Beijing calculates that large-scale warfare is increasingly unlikely?

Maybe the answers to these questions are buried in some secure vault at the Pentagon, but they’re not in its latest report.

Trefor Moss is a Hong Kong-based journalist and a former Asia-Pacific editor of Jane’s Defence Weekly.
Posted by Kerry B. Collison at 2:43 PM