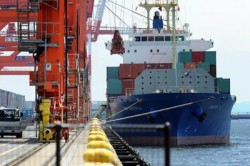 Japan and China are often seen as adversaries, locked into bickering and an historically antagonistic relationship.

They are neighbouring economic giants which have a host of unresolved historical issues to deal with and a natural rivalry for regional — and now global — influence.

Despite the ongoing political tension, trade and commerce between Japan and China has prospered over the past 20 years or more because of both countries’ commitment to the global trading system and global trading rules. This can be seen most clearly in China’s long 15-year march toward WTO accession, where, on the way, it unilaterally lowered trade and other barriers.
It showed the world, and potentially worried Japanese business, that it would work within the rules and norms of the global trading regime. Emblematically the most significant trade liberalisation by any country in recent times was the announcement of China’s unilateral trade liberalisation at the APEC Summit in Osaka in 1995.

By any reasonable measure, the institutional reforms that China signed onto when it acceded to the WTO have been implemented faithfully, and disputes with major partners have mostly been contained within the WTO system. China has credibly shown the rest of the world that it is committed to moving toward a market economy system and working within the rules set out for it.

Australia and other regional economic partners cannot view their relationships with Japan in isolation from their relationships with China. And Japan’s relationships with these countries are closely bound up with China. Japanese firms — once manufacturing powerhouses confined largely to Japan itself — now produce over 45 per cent of their electronics output and 33 per cent of all their manufacturing output offshore, a very large portion of that in China. Like most international brands, Sony, Panasonic and other Japanese big-name brands assemble their products in China and elsewhere in Asia, and products made in China frequently come with a Japanese name.

Australia’s business with Japan, for example, is no longer confined to Japan itself but involves three- or four-way trade in China and within the region. The strength and international competitiveness of Japan’s core manufacturing activities are inextricably bound to production systems in China and across the region. The idea that the strength of Australia’s economic relationship with Japan does not depend on the strength of Japanese–Chinese ties and Australia’s own links to China is an anachronism, a delusion that no longer reflects contemporary economic reality.

This makes it a top priority for Australia and other regional economies to keep the region open and to support the faltering global trading system, by achieving an outcome from Doha and rebuilding the WTO.

No doubt tensions will arise from time to time between Japan and China — as they must with any two powerful neighbours — and the maritime incident in 2010 was an acute reminder of how both sides, with such a big stake in regional prosperity, need to remain prudent lest they risk damaging their own interests.

Importantly, the region’s relative stability and the lessening of regional political tensions that has accompanied regional economic integration over the past few decades have been secured within the framework of global economic institutions which made these developments possible. Keeping the global system strong and open underpins the huge economic relationship that has grown between the two biggest trading partners in Asia — the second- and fourth-biggest traders in the world — and their neighbours in the regional economy. East Asia Forum

Dr Shiro Armstrong is a Research Fellow in the Crawford School of Public Policy at the Australian National University and co-edits the East Asia Forum.