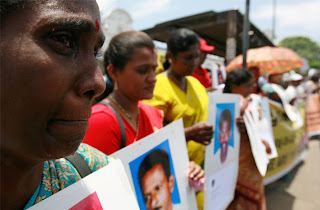 The Working Group on Enforced or Involuntary Disappearances of the UN Office for the High Commissioner for Human Rights has recorded 5,671 reported cases of wartime-related disappearance in Sri Lanka, not counting people who went missing in the final stages of fighting from 2008 to 2009.

Hostilities between government forces and the Liberation Tigers of Tamil Eelam rebels, who had been fighting for an independent Tamil state for nearly 30 years, ended on 18 May 2009.

“It’s been almost three years. My son went missing on 14 May [2009] and I have not heard from him ever since. He was not a member of the LTTE or [any] other group. He was just a normal Tamil civilian,” said Aarati*, 56, a mother of three in the northern town of Kilinochchi, in the former war zone. Another son has been missing since 1993.

Ganeshan Thambiah from the town of Jaffna, also in the north, told IRIN he has lost hope. “My son has gone missing for three years. It hurts me a lot but he is probably dead.”

Disappearances occurred on a “massive scale,” especially between 2006 and 2009 during the last phase of the war, said Ruki Fernando from the Christian Alliance for Social Action, a local NGO. “At the end of the war, many who surrendered to the army disappeared, including a Catholic priest and several high-profile LTTE leaders.”

Fernando includes journalists, human rights defenders and humanitarian workers among the missing, but says the real “tragedy” has been the reluctance of law enforcement authorities and state institutions to confront “this horrible crime, even when some leads are available”.

In one alleged disappearance, Fernando said, law enforcement personnel and the Human Rights Commission of Sri Lanka have been unable to get a statement from a government advisor six months after he indicated he had information about a missing journalist.

Successive governments resorted to abductions to deal with political dissenters, militants, and now criminals. “This indicates a reluctance to use the criminal justice system and [a] total breakdown of rule of law,” he commented.

However, a high-ranking military officer who requested anonymity maintains that the state has not been involved in any alleged abductions, and that most of these allegations have been politically motivated. “There is a law in the country and we respect it. The army and government [are] clearly not behind any abductions, as claimed by various groups,” he told IRIN.

But, three years on, the numbers of disappeared do not add up, said Jehan Perera, executive director of the National Peace Council of Sri Lanka. He points to the discrepancy between the number of people who once lived in five districts in the north - collectively known as the Vanni, and most heavily affected by fighting - and the number there today.

“There needs to be a credible investigation into [these disappearances] to lay all doubts to rest. There needs to be involvement of independent groups in ascertaining the facts, or else the doubts will continue as to the fate of the missing persons,” he said.

The government has faced mounting pressure to act on the recommendations of a commission appointed by the president in December 2011, one of which is the criminalization of enforced or voluntary disappearances.

Acknowledgement of the disappearances and legal remedies are “prerequisites for any successful, durable and all-inclusive reconciliation process,” noted the Commission of Inquiry on Lessons Learnt and Reconciliation.

Yet local activists say the disappearances have not stopped. “They still occur with sufficient regularity to make people feel that there is no clear break with the past, so there is still a dark cloud of fear in the country,” said Perera.

“Many dissenting voices faced ‘white van’ abductions more recently, and the list is not short by any means,” said Jayasuriya Chrishantha Weliamuna, a senior human rights lawyer in Colombo, the capital. He reported that two activists working against abductions, while organizing Human Rights Day events in Jaffna on 9 December 2011, had also been abducted.

Twenty-one disappearances have been reported to the government-appointed Human Rights Commission of Sri Lanka from the beginning of the year to 18 April.

Perera said that with the state’s “massive security network “and “top class intelligence system” there should be “no justification for even a single disappearance today”.

*not her real name

(IRIN delivers humanitarian news and analysis as a service of the UN Office for the Coordination of Humanitarian Affairs. This report does not necessarily reflect the views of the United Nations.)