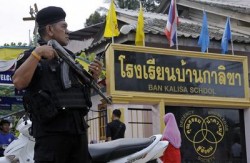 Thailand has witnessed an upsurge in violence throughout its unsettled south. The message is clear: more repression will not pacify the region, so the government and the military need to adopt a different strategy.

On 31 March 2012, two separate and apparently coordinated bomb explosions killed 14 people and wounded hundreds more in Yala Province in southern Thailand, making March the region’s most violent month in recent years (73 violent incidents led to 56 deaths and injured 547 others). These incidents mark a worrying deterioration in the long-simmering conflict in the Malay-dominated southern provinces of Narathiwat, Yala and Pattani. Since the insurgency flared in January 2004, it has claimed the lives of some 5,000 people and injured over 8,000.

In the 2011 election campaign, Prime Minister Yingluck Shinawatra opened the possibility of allowing some form of autonomy for the three southern provinces and of including them in a special economic zone. Police Colonel Tawee Sodsong, the prime minister’s recently appointed director of the Southern Border Provinces Administrative Centre, also raised the possibility of self-rule and of lifting the emergency decree that allows suspects to be detained for more than 30 days and grants government officials immunity from prosecution.

But Army Commander-in-Chief General Prayuth dismissed these suggestions, saying they are contrary to the army’s position of an ‘indivisible’ Thailand. The media also reported that ex-prime minister Thaksin Shinawatra, the current prime minister’s brother, was in Malaysia recently for talks with Prime Minister Najib Razak, where he also met with exiled Malay leaders for so-called peace negotiations. If true, it is difficult to imagine a less likely approach to peace, because Thaksin’s own heavy-handed actions fanned the flames of insurgency in 2004 in the first place.

Thailand’s southern insurgency has never been jihadist or religious in nature. It has always been about alienation — economic and cultural — as well as perceived social and economic injustice.

The time has come for the Thai government and the army to recognise that without a formal political agreement it will be almost impossible to restore peace to southern Thailand. A military solution has been tried for many years and failed. All it seems to have done is further alienate the local people, so more repression will not work.

Prime Minister Yingluck’s desire to bring about an end to the insurgency in southern Thailand should be taken at face value. But her room for manoeuvring is limited by the army on one side and the shadow of her brother on the other. Both should back off and give her space to bring about a lasting peace. She has been right in seeking the support of Malaysia’s Prime Minister Najib to achieve this, as it is in the interest of both countries to bring this long-simmering conflict to an end.

There are few alternatives to negotiations with the insurgents, for example, by bringing in an international mediator such as the UN. The conclusion is ever clearer: a final agreement will very likely have to include a certain degree of autonomy, a recognition of Thailand’s diversity and measures that support the economic development of the affected provinces.
Vikram Nehru is Senior Associate in the Asia Program and Bakrie Chair in Southeast Asian Studies at the Carnegie Endowment for International Peace.
An earlier version of this article was first published by the Carnegie Endowment for International Peace.