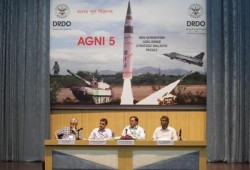 India’s launch of the Agni-V, an intermediate-range missile close to intercontinental range, has been widely hailed as a ‘game changer’ and a ‘milestone’ in India’s quest for security.

Now that the applause has died down, it is worth looking at how the game stands to be changed by this launch.

In fact, at least three ‘games’ can be identified. The first and most touted game, deterring China, is irrelevant. The second game, strategic politics, is a winning game. And the third game, security and deterrence strategy, is a losing one.

First, in deterring China, the main achievement of the Agni-V is said to be its enhanced reach. With a range of 5,000 km, it is capable of targeting all of China (read Beijing and Shanghai) from deep inside Indian territory. But the notion that Beijing and Shanghai must be targeted in order to deter China is questionable because it assumes that Chinese leaders will be willing to dispense with smaller but still large cities that are closer to India. With a population of over 5 million, Kunming is less than 1,500 km from Kolkata while Guangzhou, whose population exceeds 10 million, is about 2,500 km from Kolkata. In both cases, existing intermediate-range missiles with ranges of 2,000–3,000 km (Agni-II and Agni-III) fired from the Indian northeast would suffice to cover the distance.

Those who see the Agni-V as a game-changer argue that intermediate-range missiles deployed in northeast India would be ‘vulnerable’ to a first strike, and that the new missile builds second-strike capability. But that does not stand up to scrutiny: no one contemplating a first strike can be certain of eliminating all the adversary’s forces, especially when they are in mobile basing mode. In short, the Agni-V does not change the deterrence game vis-à-vis China.

The second (winning) game has to do with strategic politics. The Agni-V is a ‘game changer’ — albeit not a radical one — for the US–China–India strategic triangle. This is possible because much that goes by the name of ‘strategy’ boils down to a combination of perception and interests. Notwithstanding the admonitory finger-wagging that followed India’s 1998 tests, both the US and China accommodated India. A key landmark was the changing of US domestic law and the rules of the international cartel, the Nuclear Suppliers Group, to allow nuclear civilian trade with India.

The twin changes in effect recognised the reality of India’s nuclear weapons status because the agreements formally classified Indian nuclear facilities into civilian and military. It is hard to imagine that this would have happened without India having crossed the testing threshold first.

The Agni-V test has already evoked a similar reaction. Washington and Beijing, in contrast to 1998, have responded mildly with peace-oriented murmurs. US commentators have welcomed the test as a ‘major step’ in deterring China and noted that the US is ‘comfortable with Indian progress in the nuclear and missile fields’. The Chinese response has been varied, from a foreign ministry spokesman’s call for cooperation between ‘emerging powers’ to a Global Times commentator’s assertion that China’s nuclear power is ‘stronger and more reliable’ and that ‘India would stand no chance in an overall arms race with China’. Either way, India’s strategic profile has been enhanced and, for better or worse, it will play a more significant role in global strategic politics.

The last game — security and deterrence strategy — is a losing game. India started down the path of nuclear weapons capability as a reluctant nucleariser. Following the 1998 tests, India announced it would not test again, opted for a ‘recessed’ non-deployed posture, and foreswore arms racing with its rivals. Since then, a gap has opened up between its still minimalist posture and a widening weapons program. The source of this gap is the uncritical adoption of basic US nuclear strategy: in the early years of the Cold War, US nuclear strategy came to rest on the notion of ‘assured second-strike capability’, which was geared around the US’s ability to respond with a massive retaliatory strike after absorbing a surprise Soviet attack. This translated into building an arsenal characterised by varied capability, high accuracy and short response time revolving around a nuclear ‘triad’ of land, air and sea-based weapons systems.

India today is doing precisely what the US and the Soviet Union did during the Cold War: consuming precious resources on an ever-expanding capability that will not add to security. What deters a potential first striker is the unknown (and unknowable) risk of a nuclear reprisal — not the certainty of massive retaliation. It follows that the Agni-V, the much-anticipated submarine-launched ballistic missile, and planned multiple-warhead missiles are already redundant.

The fundamental reason for India’s commitment to a losing game is intellectual: policy makers do not seem to know what ‘minimum deterrence’ means.

Rajesh Basrur is a Senior Fellow and Coordinator of the South Asia Programme at the S. Rajaratnam School of International Studies (RSIS), Nanyang Technological University.
A version of this article was first published as an RSIS Commentary.