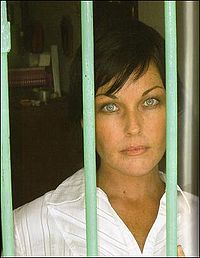 
"The clemency reflects Australia’s strong diplomacy to protect its citizens. Our government should follow the Australian government when it comes to the protection of people abroad," House of Representatives’ deputy speaker Promono Anung, a member of the Indonesian Democratic Party of Struggle (PDI-P), said Wednesday.

"A five-year clemency is too much for someone who committed a serious crime like Corby. Following the Australian government's strong diplomacy, the president must pressure Australia to release Indonesians detained there for allegedly smuggling people, for example.”

President Susilo Bambang Yudhoyono has signed the clemency letter sent to Kerobokan Prison in Bali, where Corby has been serving her sentence.

The clemency, signed on May 15, will cut five years from Corby's 20-year prison term for smuggling 4.1 kilograms of marijuana from Australia into Bali in 2004.

Separately, lawmaker Ahmad Basarah of the House's legal and human rights commission said that the clemency proved the government's failure to have the same level of diplomacy as the Australian government.

He quoted State Secretary Sudi Silalahi and Law and Human Rights Minister Amir Syamsuddin, who previously revealed that the clemency was given without any guarantees from the Australian government to do the same for Indonesians detained there.

"The Indonesian government should have assured the Australian government to also grant clemency for Indonesians serving sentences in Australia before signing the letter to grant Corby's," Ahmad said.

For this reason, the Indonesian public deserved an explanation from the President, he added.,
Separately, Australia on Wednesday denied reports it had agreed to treat young Indonesian people smugglers more leniently in return for Indonesia reducing Corby's prison sentence.

But Foreign Minister Bob Carr conceded that Indonesians saw a link between the treatment of Australian Schapelle Corby and young Indonesians held in Australian prisons.

The successful bid for clemency comes a week after Australia released three young Indonesians from prison based on new evidence that they might not be adults. Crew members of Indonesian people smuggling boats who illegally bring asylum seekers to Australia are sent home without punishment if they are children.

"That's how the Indonesians see it," Carr was quoted by Associated Press.

But he denied that Australia's decision was part of any reciprocal agreement.

"We'd be making that decision about those minors if there were no Schapelle Corby and indeed no Australians serving time in Indonesian jails," Carr said. "We'd be doing it because it's unconscionable to hold minors in adult prisons."

"If that's created a level of goodwill in Indonesia that has helped make this decision possible, then that's fine," he added.

He said both Corby and the incarceration of young Indonesians in Australia were on the agenda of an inaugural bilateral summit involving foreign and defense ministers in Canberra in March. He said Australia had undertaken to release Indonesian prisoners if evidence emerged that they were minors.

"In all sincerity, they can see the issues as being linked, but for our own part, we would have been making the decision on minors if there were no Australians in any Indonesian prison," Carr said.
Meanwhile, the lawyer of Corby says he is happy with the decision from President Susilo Bambang Yudhoyono to grant a prison-term cut.

Iskandar Nawing, said late Tuesday that he was unaware of the news before reading about it in the media, adding that he would deliver the “good news” to his client on Wednesday.

“I really appreciate the President’s decision to grant Corby’s appeal,” he said.

He said that his camp was still unsure of when the Australian would be freed, but added that he was hoping that it could be “as soon as possible”.

“I could not give you the exact date of when Corby will be free from the imprisonment. We must check all of the remissions that she has already gotten,” Iskandar said.


From Kerry. I agree with these comments. When Corby returns to Australia she will be no doubt rewarded for her criminal activity by earning many hundreds of thousands of dollars with book deals, possible movie deals and interviews. She should serve the full sentence in my opinion.
Posted by Kerry B. Collison at 3:43 PM