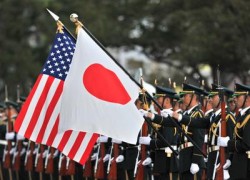 In early 2012 the US Department of Defense released new defence strategy guidelines.

The document titled ‘Sustaining US Global Leadership: Priorities for 21st Century Defense’, notes that the US ‘will of necessity rebalance toward the Asia Pacific region’, and gives the reason for this change as ‘US economic and security interests inextricably linked to developments in the arc extending from the Western Pacific and East Asia into the Indian Ocean region and South Asia’.

While welcoming this emphasis on the security of Asia, Japan will have to address three important dimensions of the US shift: first, an increasing emphasis on the Asia Pacific region has been a consistent part of the current administration’s foreign policy since President Barack Obama took office in January 2009. In Japan, the Obama administration’s shift toward Asia was observed and welcomed from the very beginning.

The Department of Defense stressed the importance of US alliances with Japan and the Republic of Korea for deterrence and defence in Northeast Asia in its Quadriennial Defense Review Report of February 2010. It also declared that the US would ‘transform Guam, the westernmost sovereign territory of the United States, into a hub for security activities in the region’. The US Asia Pacific policy has been further articulated by Secretary Clinton’s article ‘America’s Pacific Century’ in the November 2011 issue of Foreign Policy. Her position was eloquently endorsed by President Obama in his speeches in Australia in November 2011, and followed by the new strategic guidelines released by the Department of Defense in 2012. In short, the return of the US to Asia is not a mere change in policy priorities based on recent developments in the strategic environment. Japan needs to take it as a policy reflecting the natural and immutable geo-strategic position of the US.

The second point for serious consideration is that the shift toward the Asia Pacific region may fundamentally represent demobilisation from a wartime posture rather than a mere change in US policy priorities. Secretary Clinton has said that ‘as the war in Iraq winds down and America begins to withdraw its forces from Afghanistan, the United States stands at a pivot point’. Disengaging from close combat in two theatres, the US seems to be ready to re-establish its natural posture.

If this is true, we may have to answer questions about what kind of normalcy awaits the region and how the US and its allies should deal with future challenges. It is obvious that we are not simply returning to the pre-9/11 world. The future will be complicated by a set of unknowns.

China’s rise alone, for example, will bring great opportunities and serious challenges that require strategic coordination among allies and friends in the region. This is a good time for Japan to start negotiating the strategic implications of the mid- to long-term US security strategy as set down by the Department of Defense and Japan’s new Defense Program Guidelines. The two countries have come to the same conclusion: that they need to make their utmost efforts to engage and hedge China in seeking better relations while preparing for the worst.

In military operational terms, there is considerable room for closer cooperation between the US and Japan. For example, Japan’s dynamic defence posture focusing on the southwestern part of its territory will have significance for US operations that place a greater emphasis on Anti-Access/Area Denial (A2/AD) capabilities against possible opponents. If Japan establishes a modest but reliable defence posture for its territorial waters, airspace and islands, it will assist the US in overcoming A2/AD-related challenges in the western Pacific.

The third implication of the US shift to Asia qualifies the point above about the consistency of US Asia-oriented policy. There are wildcards that might cause another drastic change in US foreign-policy priorities. Because the US shift to Asia is based on the assumption that the wars in Iraq and Afghanistan are winding down, there remains the possibility that if the situation in either theatre worsens, the US might need to shift away from the Pacific. Japan thus has to make every effort to reconstruct post-war Iraq and Afghanistan and revitalise their economies so that those two countries do not become hotbeds of terrorism. Problems with Iran’s nuclear program, too, may draw America’s attention back to the Middle East.

Japan has to work hard to foster the preconditions for a US emphasis on Asia’s security. In other words, attaining peace and stability in the Asia Pacific region calls for Japan to pay keen attention to out-of-area security problems and thus secure the US’s political commitment to the region.

Lieutenant General (Ret.) Noboru Yamaguchi is Professor of military history and strategy at the National Defense Academy of Japan.
This article was originally published as an AJISS Commentary.East Asia Forum