A summer of political drama for Japan? 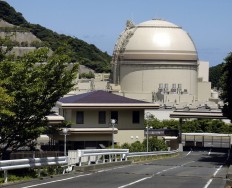 On 5 May 2012, the last of Japan’s 54 nuclear power reactors was shut down for safety checks.
This has been welcomed by Japan’s growing anti-nuclear power movement, backed by public opinion that is overwhelmingly in favour of reducing Japan’s dependence on nuclear power in the wake of the 2011 Fukushima nuclear-plant disaster.


Prime Minister Yoshihiko Noda of the Democratic Party of Japan (DPJ) has no concrete proposal to phase out nuclear power, nor to boost alternative-energy investment. Noda is simply determined to restart plants once they pass a government safety review. This is in spite of an Asahi Shimbun public opinion poll on 11 March 2012, which showed that 57 per cent oppose restarting nuclear reactors and 80 per cent do not trust the government’s safety measures.

Aside from the democratic dysfunction that arises from the disconnect between voter preferences and the policy direction offered by the major parties, two additional developments could lead to a mass anti-nuclear movement in Japan. One is that an institutional disconnect is also becoming salient with regard to other issues, such as the proposed consumption-tax increase, Tokyo’s inept Tohoku earthquake and tsunami rebuilding effort, the lack of transparency about the risks of radiation exposure, the erosion of job security due to labour-law reforms, and the lack of progress in resolving the Okinawa base issues. Thus, there is a potential for mass mobilisation around the highly charged issue of nuclear power.

There is also the ‘Arab Spring’ phenomenon, through which counter-elites using social media and civil-society organisations can bypass the national mass media and political establishment to mobilise mass movements. In Japan, the counter-elites opposing dependence on nuclear energy are sub-national government leaders such as Osaka Mayor Toru Hashimoto, independent entrepreneurs like Masayoshi Son, cultural elites such as Nobel laureate Kenzaburo Oe and even the Japan Buddhist Federation. Politicised social media has developed quickly: for example, Web Iwakami uses multiple live-streaming channels to report on anti-nuclear events across the country. With respect to civil-society organisations, intellectual and cultural figures have set up Green Active, a national social network of opponents of nuclear power. And the anti-nuclear Greens Japan consists of 60 local-assembly members who hope to run in the next Diet election, with winners to form a national Green Party.

Thus the stage is set for a drawn-out showdown on nuclear-energy policy this summer. The interests that Noda represents do not want to go through the summer with many nuclear plants shut. High electricity costs will drive many businesses to the wall, and the public will further question the need to restart plants if it can get through the peak season of electricity demand in decent shape. If Noda is too weak to reopen plants by early summer, he may have to be replaced. (His Cabinet support rate is already down to 26 per cent due to his push for a consumption-tax increase and the restart of nuclear plants). Otherwise, an unintended, de facto phase out of nuclear energy will emerge.

Here is where the scenario analysis becomes truly interesting. The DPJ has a majority of seats in the lower house, which elects the Japanese prime minister. Normally, the DPJ would use its majority to select a senior DPJ leader like Katsuya Okada who would pick up where Noda left off. But things may not be so simple.
In late April, Ichiro Ozawa was found not guilty of political-funding fraud. He is now free to rejoin the DPJ and use his control over the party’s largest faction to try and regain his leadership, which Ozawa lost when he resigned his party membership to fight the court battle. Ozawa would change the DPJ’s direction if he regained leadership, likely ending tacit policy collusion with the LDP. He would appeal to the median voter through popular policy changes, in all likelihood including nuclear-energy reduction, in the same way that brought the DPJ resounding victories in the 2007 upper house election and the 2009 lower house election. This new DPJ policy profile could attract the support of the anti-nuclear power movement, and the LDP would no longer want to face a general election against the DPJ.

Ozawa forced the LDP from power in 1993 when he walked out of the party, and he could do the same to the DPJ today — walking out with his roughly 100 followers — if an attempt to secure his leadership were blocked. He would be free to team up with present and former coalition partners, as well as with politically mobilised counter-elites and voters desperate for change. If Ozawa emerged after a general election at the head of a winning coalition, he would realise his dream of becoming prime minister and ushering in a competitive two-party system in Japan.

By contrast, if Ozawa fails in his ambitions, the political establishment could continue its unpopular program of restarting nuclear plants despite popular opposition — but this option risks a popular backlash that could be set off by something as simple as a viral video. The alternative, for leaders to give the public a concrete plan to shut down nuclear plants, would be unexpected. What is clear is that an interesting summer lies ahead.