The Fatal Flight of the Superjet 100: Why Did It Slam Into a Mountain? 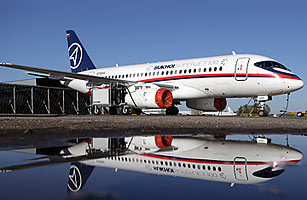 On May 9, the veteran Russian pilot Alexander Yablontsev was flying an exhibition flight over the mountains of Indonesia when he radioed in to flight control with an odd request. There was bad weather ahead, and he asked permission to drop more than a kilometer in altitude to avoid it. Normally, a plane is supposed to climb to avoid thick clouds, not descend, especially when flying over the craggy peaks and cliffs of the Indonesian archipelago. But, apparently trusting Yablontsev's judgment, the controller gave him permission to descend. Minutes later, the plane slammed into the nearly vertical peak of Salak mountain, near Jakarta, and exploded on impact. All 45 people on board were killed, most of them journalists and Indonesian airline officials, and the wreckage, as well as the human remains, went tumbling down the face of the cliff.
Since then, experts have been debating one crucial question: What would have led Yablontsev, one of the most experienced pilots in Russia, to make such a perilous call? The picture is still murky, and because of the mountainous jungle terrain in that part of Indonesia, rescue workers were only able to recover the flight recorders on Sunday, four days after the crash. It will take weeks if not months to analyze them. But the consensus emerging among observers is that Yablontsev may have been showing off the plane's capabilities, perhaps in front of passengers allowed into the cockpit, before the plane dove toward the mountain top.

The plane he was flying, the brand new Superjet 100, is the pride of Russia's civil aviation, the only commercial airliner designed and built by Russia since the fall of the Soviet Union. Yablontsev and his crew had been taking it on a road show of six Asian countries, ferrying around potential buyers in Kazakhstan, Pakistan and Burma before taking the show to Indonesia. Although the immediate purpose of the tour was commercial — the owner of the Superjet, the Russian fighter jet maker Sukhoi, wanted to sell as many planes as possible — the trip also had political significance. The Superjet is meant to restore at least some of the prestige that Russian engineering had lost after the Soviet collapse, when Russian machines began to disappear from the fleets of major air forces and commerical airlines. Months after Vladimir Putin first became Russia's president in 2000, he oversaw the beginning of the Superjet's development as a point of national pride.

On Wednesday, the parent company of the Sukhoi announced that during the Superjet 100's six-country tour of Asia, when it was in Pakistan, one of the planes was sent back to Moscow after the crew noticed a problem with the engine. Sukhoi then sent a replacement Superjet, which continued the tour with the same crew. That was apparently the plane that crashed. The pilot's decision to descend remains a main focus as a likely cause of the crash. On Tuesday, a senior aviation official in Indonesia reportedly said, "The main question is why the pilot veered off course."

But even without this latest crash, healing the image of the Russian aviation industry was never going to be easy. Russia had the worst air safety record in the world last year. More than 100 people were killed in at least five plane crashes, and two of the world's five deadliest air disasters in 2011 happened in Russia, including the crash that killed the entire Lokomotiv professional hockey team. The year before, the president of Poland and most of his government died in a plane crash in western Russia while flying a Russian-made plane. In another notorious incident in 2008, the Russian captain of a flight from Moscow to New York slurred his words so badly as he made his welcome announcement before take off that the passengers demanded a new pilot, believing the captain was drunk. The flight attendants tried to calm them down, but finally allowed the passengers to disembark after a TV celebrity who happened to be in first class refused to fly.

During the Superjet's road show, it appears that the usual flight protocol was not always followed. For one thing, the door of the cockpit was sometimes left open, allowing passengers to talk to the pilots and enjoy the view through their windows. When the plane first crossed the equator, Sergei Dolya, a Russian blogger and travel writer who was on the tour, dressed up as Poseidon and went sprinkling water on the flight crew in a kind of mock pagan ritual. On his Twitter account, Dolya posted pictures of himself in the cockpit, naked from the waist up, wearing a beard made of tinsel and holding a trident made of aluminum foil. The photos show the co-pilot, still seated at the controls in mid-flight, laughing as he snapped pictures of Dolya-Poseidon on his mobile phone.

On Sunday, these antics led the German magazine Der Spiegel to suggest that frivolity may have had a lot to do with the disaster. The Superjet's tour was "not just business," the magazine wrote, and a "lack of seriousness" could have precipitated the crash. It quoted Herry Bakti, aviation director of the Indonesian Ministry of Transport, saying that Yablontsev's decision to drop toward the mountains may have been motivated by a desire for a better view. "We suspect that he wanted to show passengers the military base," which is in that area, the official is quoted as saying.

Dolya, the blogger, was supposed to be on that doomed flight, but he sat it out in order to take pictures of the Superjet during take-off. Speaking to TIME on Sunday night, when he returned to Moscow from Jakarta, he says he is outraged by the allegations in Der Spiegel and denies that the Superjet's tour was a "merrymaking, drunken" journey. "The pilots were professionals who knew what they were doing," he says. "Had they been 30 meters higher, or 40 meters to the right, they would have made it." The only time that Dolya went into the cockpit was during his romp through the aircraft dressed as Poseidon. "Yes, we were having some fun," he says. "We sprinkled the pilots with a bit of salt water. It was no harm, no foul."
But the same cannot be said of Yablontsev's request to descend, or his apparent decision to ignore the warning system that would have gone off as he came too close to the mountain. On May 10, the day after the crash, experts at Russia's leading flight school, in the town of Zhukovsky outside Moscow, carried out a simulation of the Superjet's flight, and they concluded that the pilot may have turned off the warning system while entertaining passengers in the cockpit. "It is simply impossible not to notice the signal from this warning system," one of the experts told told the Izvestiya daily.

Pending the investigation, Sukhoi has declined to comment on any possible reasons for the crash, as has the Russian government, which owns Sukhoi. The Indonesian company whose representatives were on that flight, Sky Aviation, has meanwhile suspended its purchase of 12 Superjets. Orders for around 200 others, mostly for airlines in Asia and the former Soviet Union, are still pending and likely to go ahead if the cause of the crash is found to be pilot error rather than technical faults. But that will not mean the Superjet has completed its mission. After this latest crash, the good name of Russian aviation is no closer to being restored.
“Time” magazine By Simon Shuster / Moscow