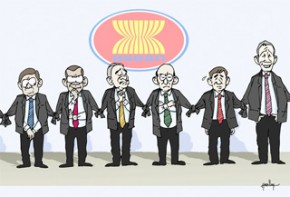 ASEAN concluded its 20th Summit on 4 April 2012. The discussion shifted away from building an ASEAN Community, to debates over territorial disputes in the South China Sea between China, Taiwan and four ASEAN member states (the Philippines, Malaysia, Brunei and Vietnam).

There was significant debate on whether China should be invited to take part in the drafting of the code of conduct, envisioned as a legally binding document to prevent small incidents in the South China Sea from escalating into bigger conflicts.

In 1992, a year after China commenced consultation with ASEAN, the latter issued a declaration of principles on the South China Sea in which ‘all parties concerned’ were urged to exercise restraint in order to create ‘a positive climate for the eventual resolution of all disputes’. Ten years later, in 2002, China signed the Declaration on the Conduct of Parties in the South China Sea with ASEAN. Since then, ASEAN and China have been working on a ‘Regional Code of Conduct in the South China Sea’, but no agreement has been reached so far.

A number of factors informs how ASEAN, as a region, views the problem of the South China Sea.
First, since all ASEAN countries are not equally involved in the dispute, there is no single ASEAN-led approach to it. Because each ASEAN member state pursues its policy individually with China depending on its own economic interests, the ASEAN countries are arguably divided over their approach toward Chinese territorial claims in the South China Sea. As a result, ASEAN’s political and strategic position vis-à-vis China becomes relatively weak.

For some time now, China has been proposing to settle the dispute through bilateral consultation between the concerned countries. ASEAN is aware of its weaknesses and agrees that 10 countries together are a better strategic and political force against China. ASEAN member states must therefore stand united to convey a clear message to China.

Second, China understands that ASEAN countries have different approaches to China itself. After years of assurances that ASEAN countries have nothing to fear from a rising China, senior officials in Beijing have issued statements that suggest they treat countries that have territorial disputes with China, and those that do not, differently. Until now ASEAN’s policy of engaging China — and China’s accommodative approach to the South China Sea issue — has brought some temporary benefits. But it has not been very effective in managing the issue or restraining it from escalating.

During the 2010 ASEAN Regional Forum in Hanoi, the dispute between China and ASEAN came out into the open. US Secretary of State Hillary Clinton stated that the US is in favour of ‘a collaborative diplomatic process by all claimants for resolving the various territorial disputes without coercion’, which ASEAN welcomed. Other non-claimant countries, including Indonesia, Australia and Japan also got involved, weakening Beijing’s claim that the dispute is only between China and a few ASEAN members.

Realising this, ASEAN — under Indonesia’s chairmanship in 2011 — reached a consensus with China to discuss the joint development of undersea resources. ASEAN and China agreed to adopt a set of ‘guidelines’ to implement the declaration of conduct, and pledged to exercise restraint. Building on this progress, ASEAN senior officials have met several times since late 2011 to discuss ‘possible elements’ of a code of conduct.

In dealing with the South China Sea issue, one should keep in mind that over one-third of the world’s seaborne trade passes through this conduit, and half of this traffic is oil and gas. Solving the dispute has important implications for the free passage of shipping and the eventual development of oil and natural gas investments in the area.

But in recent months, Beijing has signalled its strong interest in joining the deliberation process that will issue the code of conduct. At the recent ASEAN summit in Phnom Penh, the Philippines and Vietnam strongly objected to China taking part in the discussion at this juncture. Some member-states argue that ASEAN must reach an internal consensus before involving China in the drafting process.

ASEAN’s main objective in developing a set of guidelines is to encourage China to agree to resolve the dispute peacefully and ease tensions in the South China Sea. ASEAN must manage its inherent differences quietly and develop the code of conduct to correspond with international legal norms, such as the 1982 UN Convention on the Law of the Sea. Though the dispute may not be resolved completely in the short term, such an approach will ease tensions with the international community, which relies on South China Sea trade routes. This way, ASEAN will not only play an important role in regional diplomacy — it will also help manage the economic interests of non-contending countries.