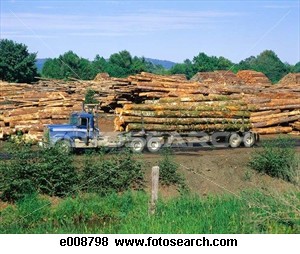 The world’s largest producer of teak, an Indonesian state-owned company on the island of Java, has again been awarded sustainable forest management (SFM) certification. But the company has a long and sometimes contentious relationship with forest communities in the area, and the forest rights of indigenous communities remain a potential cause of conflict.

“Land rights have long been a source of violence on Java,” Rhett Butler, a leading environmentalist and creator of a leading environmental news website told IRIN. Perhutani, an Indonesian state forestry company, exploits 2.4 million hectares of forests in Java — 7 percent of the island area — with earnings of around US$400 million in 2011.

Although Perhutani agreed in 2011 to the voluntary process that promotes eco-friendly management in order to obtain certification, it controls a huge area of forest once used by indigenous communities, many of whom still depend on the forests for their livelihoods.

The company needs FSC certification to access high-value wood markets in the United States and Europe, said Muhammad Firman, director of the Forest Utilization Department under Indonesia’s Ministry of Forestry.

SFM balances the present use of forests with their preservation for future generations. Certification started in the 1980s and is granted to forest companies by around 60 independent organizations under two main umbrella groups — Program for the Endorsement of Forest Certification (PEFC), the world’s largest forest certification system, and the Forest Stewardship Council (FSC) — with 20 to 30 percent of North American and European forests having certification, and Asia lagging far behind with only 2 to 4 percent.

However, many activists believe SFM certification is geared less toward local communities than toward the environment and facilitating trade between forest companies and Western wood buyers

“When indigenous people have been denied the right to use forests in the traditional way, no ‘inclusion’ programme can fully match their loss. It is not a question of “exclusion” or “inclusion,” said Deddy Raith, from the Jakarta-based NGO, WALHI-Friends of the Earth Indonesia.

“Today, Perhutani still has full responsibility over the forests,” said Ambrosius Ruwindrijarto, president of local NGO, Telapak. “What we want is to mainstream community logging as the new trees-management regime in Indonesia.”

Martua Sirait, a policy analyst in Aceh Province for the Nairobi-based World Agroforestry Center, maintains that the management of forests has ignored the customary land rights of some 40 to 60 million people since the 1960s.

Large-scale illegal loggers were often active in the forests, and local inhabitants were exposed to danger by sometimes becoming involved, or being caught in the crossfire. Between 1998 and 2008 Perhutani’s armed patrols were accused of killing 32 people and injuring 69 in the fight against illegal timber operators, The Forest Trust (TFT),  a Geneva-based international charity, reported.

Perhutani lost its SFM certification in 2002 and required TFT’s assistance to define a course of action to regain it, said Scott Poynton, TFT’s executive director.

The program, “Drop the Guns,” began in 2003, with Perhutani providing a share of timber sales and non-timber forest products to forest communities. In exchange, villagers took on a new role as guardians of the forests. But both parties only laid down all their weapons in 2009, which explained why the deadly fights continued until 2008, Poynton said.

“Peace remains fragile because the underlying cause of unequal forest rights is unresolved. Perhutani can better sell its products, but villagers have received too little,” said Hasbi Berliani, a program manager at the national good governance NGO, Kemitraan, quoting an ongoing evaluation by the Indonesian Institute of Sciences, which shows that poverty among indigenous households has yet to be alleviated.

“Villagers have been given $19 million between 2005 and 2010,” said Bambang Sukmananto, chief executive officer of Perhutani, noting that the 2011 SFM certification was recognition of the company’s efforts.

Providing greater forest rights to indigenous people is a growing trend across Asia, aimed not only at safeguarding the livelihoods of villagers but also at improving environmental protection.