No easy fix for insurgency in Thailand’s deep south 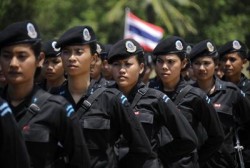 The recent bombings in the tourist city of Hat Yai in southern Thailand reflect deep-seated and enduring institutional problems that defy easy categorisation.

Commentators have put forward many explanations for this complex situation, ranging from seeing the conflict in terms of a counter-terrorist campaign as part of the so-called global war on terror, to nationalism, religious extremism, linguistic and cultural disenfranchisement, poverty, lack of education, corruption and absence of the rule of law. These explanations have touched on aspects of the problem, but so far few have translated into a clear or compelling plan of action to restore peace and order to the Malay–Muslim dominated provinces of Yala, Pattani and Narathiwat that make up Thailand’s deep south.

The expansion of the zone of conflict to include the otherwise-bustling and cosmopolitan neighbouring city of Hat Yai, combined with a surge in larger scale attacks in the deep south presents the Thai authorities with a challenge of a new magnitude.

Thailand’s military once prided itself on having stabilised the situation in the deep south. But in 2002 the military was stripped of its long-held responsibility for maintaining the peace there. Responsibility was handed over to the police, an institution with a track record of nepotism and petty corruption. In short order they made a hash of it, destroying a network of internal security informants that had previously enabled the army to address concerns before they got out of control.

In recent years the military has returned to prominence in the deep south with complicated counter-insurgency strategies and modern high-tech equipment, but the problem has continued to defy easy resolution. While a number of the military’s actions aimed at winning the hearts and minds of the locals are well-meaning, they are part of an inadequately developed national strategy, and are therefore unlikely to bring about an end to the conflict.

There are four almost-insurmountable obstacles facing the Thai state. These revolve around the Thai national sense of identity, summarised in the national motto of ‘nation, religion, king and the people’. This identity sits incongruously with many people in the deep south. First, the nation is conceived of as a unitary Thai state that refuses to contemplate a Malaysian-style confederation; second, the monarchy is Siamese, not Malay; third, the religion is Buddhism, not Islam; and fourth, the people are Thai speakers, not speakers of the Malay dialect of the deep south. Many of the people of the deep south feel a profound sense of alienation from Thailand’s national institutions, an alienation that has grown rather than dissipated over time.

The situation is compounded by problems of injustice. To give them their due, the security forces have implemented a range of reforms and have improved professionalism since the 2004 spike in violence that marked the beginning of the current insurgency. But many of the locals’ grievances over perceived injustice from early on in the insurgency, in particular the killings at the Krue Sae Mosque in April 2004 and at Tak Bai in October 2004, remain largely unaddressed. Cultural and institutional obligations to ‘save face’ for senior commanders and, in turn, for senior commanders to protect their subordinates from outside exposure has meant that many of the perpetrators of these events have not faced any kind of meaningful criminal proceedings.

The situation has also been compounded by the problem of a growing culture of violence and trafficking in drugs, arms and women. Where it reaches, the rule of law is arbitrarily applied, which in turn generates resentment. Confronting these problems is complicated by a plethora of sometimes competing and uncoordinated security forces.

Each of these is a considerable problem in its own right. Added together, they leave the Thai authorities — and the locals of the deep south — at the point of despair. In the meantime, many predominantly Buddhist Thais have packed up and left, heading north in the hope of finding jobs and safety. Many thought that safety was to be found in Hat Yai, but recent events show that not to be the case.

Thailand is in a quandary. May 6, 2012, marks the 60th anniversary of diplomatic relations between Thailand and Australia. Australia should remember that Thailand has been a good friend of long standing. It is a major trading partner and was a pivotal supporter of Australia during the crisis in East Timor in 1999. In recognition of this support, Australia should continue to foster a strong relationship with Thailand, looking to see how it can support efforts aimed at reconciliation, education and poverty alleviation.

At the same time Thailand should be encouraged to place greater emphasis on bringing people to justice without fear or favour and finding space for some greater expression of the deep south’s own sense of Thai-ness, while building and reinforcing the remaining fragments of civil society.

John Blaxland is a Senior Fellow at the Strategic and Defence Studies Centre, Australian National University.